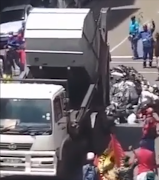 Image: Screengrab A refuse truck empties a load of rubbish on a street in Pretoria on Friday. The City of Tshwane has warned the public of a possible continuation of service disruptions by employees affiliated to Samwu.

The City of Tshwane has warned the public of a possible continuation of service disruptions on Monday and beyond by employees affiliated to the SA Municipal Workers’ Union (Samwu).

It said said the disruption might continue despite the city having been granted an interim order by the labour court on Friday evening declaring the strike unprotected.

“Tshwane applied to the labour court for an urgent interdict on Friday after employees affiliated to Samwu embarked on a service interruption spree, opening fire hydrants, halting trucks from collecting waste, disposing waste in parts of the CBD, blocking buses from operating and disrupting traffic flow in the CBD,” the city said.

It said the interim judgment ordered Samwu members to immediately disperse and they are interdicted and restrained from participating in the unlawful/unprotected strike action and prohibited from performing any acts of destruction of any public or private property or from intimidating any of the city’s employees not partaking in the strike action.

The city said services are likely to be affected if the unrest continues. These include bus operations, licensing and waste collection, especially around the CBD.

“Management will continuously assess the situation in respect of bus operations and will only release buses when it is safe to do so as they wouldn’t want to risk the situation where buses are used to block traffic in the CBD, neither would management want to put the lives of drivers and commuters at risk.”