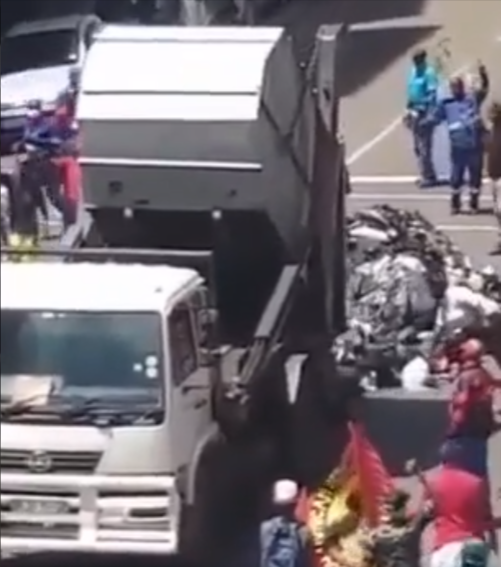 A refuse truck empties a load of rubbish on the street in Pretoria on Friday.
Image: Screengrab

Public transport by bus and bulk waste collection for businesses in the CBD were disrupted on Monday in Tshwane due to an ongoing strike by employees affiliated to the SA Municipal Workers' Union (Samwu).

Samwu members have downed tools in a wage dispute with the city.

The CBD was brought to a standstill on Friday after workers allegedly opened fire hydrants and dumped rubbish on the streets of Pretoria.

Tshwane mayor Randall Williams said on Monday the city was quantifying the damage and costs incurred due to the strike action and would issue the bill to Samwu.

“The city has properly constituted labour structures where decisions on any labour issues can be deliberated on. These structures remain open and should be used optimally to resolve issues instead of resorting to chaos.

“These are not lawful labour actions. These are political acts meant to disrupt the work of the city and hamper service delivery in the run-up to the election,” said Williams.

The city said it was granted an interdict on Friday by the labour court against the strike action by Samwu members.

According to the city, the court ruling instructed Samwu members to immediately disperse and restrained them from participating in unlawful or unprotected strike action. It prohibited them from performing acts of destruction of public or private property and from intimidating any city employees not partaking in the strike.

Despite the order, protesters still gathered and demonstrated outside Tshwane House.

The City of Tshwane warned the public of a possible continuation of service disruptions on Monday and beyond by employees affiliated to the SA ...
News
9 months ago

The City of Tshwane said on Friday it is going to court to seek an urgent interdict against the SA Municipal Workers' Union (Samwu) after municipal ...
News
9 months ago

The SA Municipal Workers’ Union says the recently concluded salary agreement for workers across the country’s 257 municipalities has secured an ...
News
11 months ago