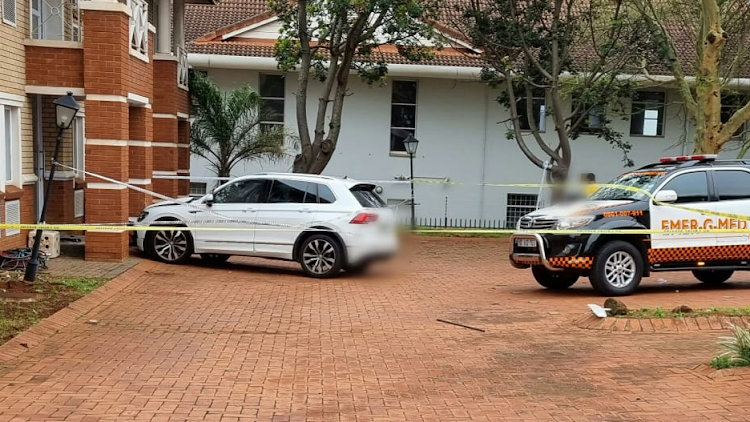 A driver died after his vehicle was shot at in La Lucia, north of Durban, on Tuesday.
Image: Supplied

A high-end luxury vehicle peppered with bullets rammed into a gate at business premises in La Lucia, north of Durban, on Tuesday morning.

On closer inspection, Emer-G-Med paramedics found the driver had died from gunshot wounds.

Emer-G-Med spokesperson Kyle van Reenen said paramedics and police responded to reports of a shooting incident in Armstrong Avenue in the La Lucia Ridge area just after 8am.

“Closer inspection found a male seated in the vehicle with fatal gunshot wounds. He was declared dead on arrival of paramedics,” he said.

He said the shooting was being investigated by the police.

“Police found an unknown male victim, believed to be in his 30s, with multiple gunshot wounds in his head and body,” she said.

“The circumstances around the attack are unknown and a case of murder will be opened at the Durban North police station.”

It is believed the man was an accountant and resident in La Lucia.

The police were flagged down by the owner of Max's Lifestyle, Max Mqadi, on Thursday after he was shot in an attempted hit outside his famous ...
News
7 months ago

The south Durban community of Wentworth is reeling from the killing of a teenager, who was riddled with bullets outside his home on Wednesday night.
News
7 months ago