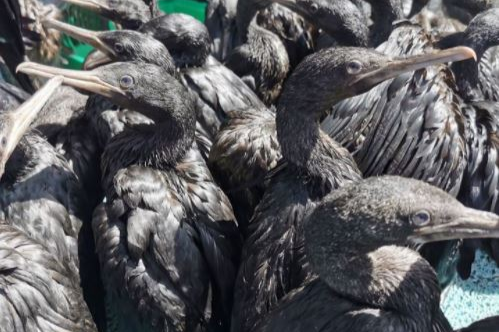 Avian influenza is wreaking havoc among wild seabirds in the Western Cape.
Image: SANCCOB via Facebook

The outbreak of avian influenza among wild seabirds in the Western Cape is enduring, with Dyer Island in the Overberg now the major hotspot.

Anton Bredell, the minister for local government, environmental affairs and development planning in the Western Cape, said on Tuesday all efforts are being taken to manage the situation, with the primary focus on responding swiftly to areas where dead and sick birds are found and then implementing a cleanup.

“Dyer Island is an important wild bird breeding colony in the Overberg region. Sadly we continue to find roughly 500 birds per day on the island dying or dead.”

By far the majority of the dead birds reported during the outbreak are Cape Cormorants, he said.

The Disaster Management Centre has asked the public across the province to report unusual behaviour or mortalities in any birds to their local municipality, conservation authority or state veterinarian. The SPCA and NSPCA may also be contacted.

China is the world's biggest poultry producer and top producer of ducks, which act as a reservoir for flu viruses.
News
2 months ago

The Southern African Foundation for the Conservation of Coastal Birds warned that the serious outbreak of Avian Influenza among wild seabirds in the ...
News
2 months ago