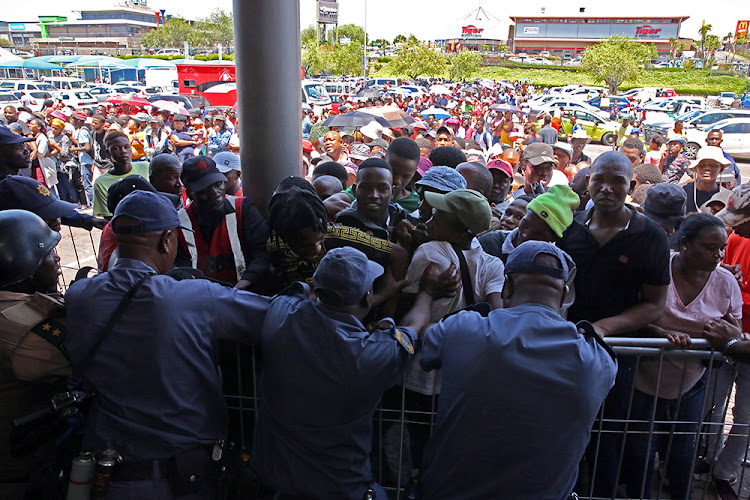 The Nike Factory Store in Woodmead, Johannesburg, had to ask the police for help in 2019 to control thousands of shoppers who arrived for Black Friday. File photo.
Image: Thapelo Morebudi/Sunday Times

Despite 7.8-million jobless people, high levels of youth unemployment, an economy throttled by the pandemic and subsequent lockdown — and a threatened insurrection — many South Africans are still planning to splurge on Black Friday.

A Q3 consumer survey by retailer Game found that 67% of consumers hope to find deals on popular items on November 26.

Black Friday was established in the US on the day after Thanksgiving as a way for stores to get rid of old stock in preparation for new Christmas stock. Essentially this meant getting their books from the red — where their stock is greater than their income — back into the black, where they do not owe money on their stock.

The trend went global and spectators are now used to seeing thousands of people storm into stores seeking a bargain.

After spending 2020 under strict lockdown, consumers are expected to keep safe by not joining large crowds. The spending power of consumers has also been affected by the pandemic.

The survey unpacked the most popular categories that surveyed consumers planned to spend money on:

Game's Black November SBWL competition (SBWLing is millennial-speak for lusting after something) — where consumers tell the store what they are SBWLing to stand a chance of winning R20,000 in shopping vouchers — revealed that most consumers were interested in purchasing Smart and LED televisions this year.

With more than 13,000 responses, after televisions, consumers wanted deals on laptops and smartphones.

Katherine Madley, vice-president of marketing at Game, said: “While big ticket items are always on consumers' shopping lists during our Black November month, many of our competition entrants also said they’d like to stock their pantries and cupboards with more essential items this year, such as non-perishable food items and nappies, as popular options. This is proof of how stretched the consumer budget is in 2021 and follows the trend we have seen with consumer shopping habits over the last 18 months, where shopping has become about essential needs rather than luxury items and wants.”

Gogo gifted with R10,000 shopping voucher by ANC vows she will vote for Mandela

“I love the ANC because of ntate Mandela and will never vote for another party because that would be tantamount to a churchgoer leaving their church, ...
Politics
3 months ago

Consumer spending is recovering better than expected in most categories, as Covid-19 lockdown regulations have eased.
News
3 months ago