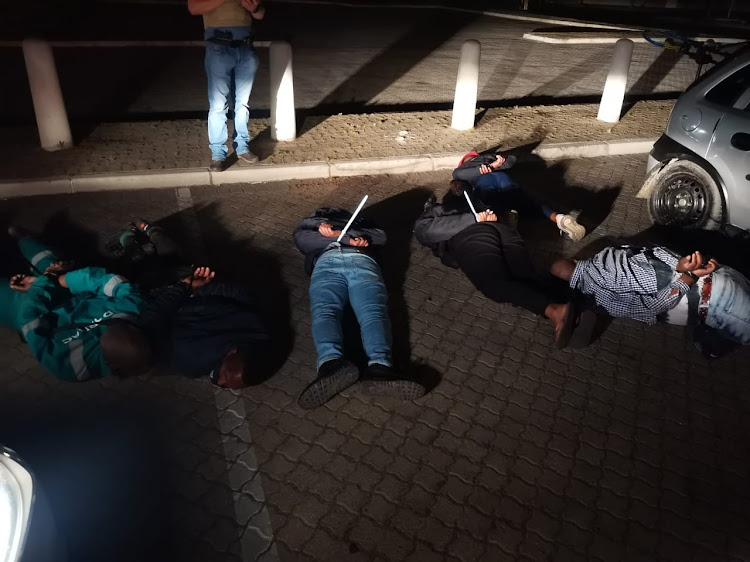 Ten alleged fraudsters connected to a card cloning syndicate were arrested in Paarl after using cloned petrol cards to fill up 74 containers with fuel.
Image: SAPS

Scammers, including a police intern, who cloned government vehicle petrol cards were arrested at a Paarl petrol station while filling up containers with fuel.

Detectives from the Western Cape police commercial crimes unit teamed up with investigators from financial institutions and stopped what police spokesperson Col Andrè Traut called a “fraud syndicate” in their tracks.

Traut said the group of fraudsters consisted of nine males and one female, all aged between 23 and 41.

“The female suspect is an intern employed by SAPS in Mitchells Plain, and her involvement is also the subject of a departmental investigation,” said Traut.

“Intensive investigation into the syndicate’s criminal activities led the investigation team to a petrol filling station in Paarl earlier in the week where the suspects were apprehended in possession of 52 cloned fuel cards, mostly linked to government vehicles,” he said.

“The investigation into the circumstances surrounding the arrest of the 10 suspects is still under way and the possibility of more arrests is not excluded,” he said.

The group is expected to appear in the Paarl magistrate's court on Tuesday next week.

The National Prosecuting Authority said on Thursday that most of the accused  Nigerians are in SA illegally.
News
2 months ago