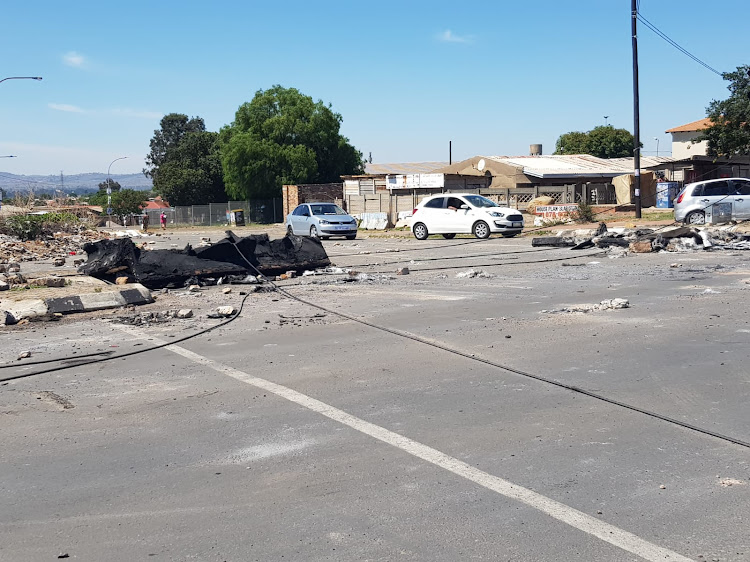 A drive along Chris Hani Road in Dlamini, Soweto, showed the damage wrought by aggrieved residents on Monday morning.

Many of the disgruntled residents have not had power for two weeks on the day of the local government election.

A pile of debris and live cables lay along the road not far from the Lilydale Primary School voting station in Dlamini, which has been battling with ongoing blackouts for several weeks.

This evidence of damage caused by disgruntled residents unhappy about service delivery were also seen by President Cyril Ramaphosa, who voted in Chiawelo, some 3km away.

The Lilydale station also did not have power and it was not clear how it would handle voters when the sun sets. A presiding officer at the station refused to say.

None of the few residents who came to vote at the Dlamini station condoned the actions of the unidentified people who tried to block the road on the day of the voting, but asked authorities to ensure there was constant electricity supply and be given updates by the municipality on when the power will come back.

“I want to drink tea but there is no electricity. The municipality is not giving us any updates. I can't drink pills on an empty stomach,” Mavis Khumalo, 69, of Dlamini extension 1, said after voting.

She said the power cuts had limited the range of food she is able to consume.

“I eat bread and sugar water every day. I can't even fry eggs,” Khumalo said.

Another resident, Kellina Mokoena, 65, complained about the power outages as it meant her family cannot keep food in the fridge for long.

“We want electricity. We had to throw away food. We just want the municipality to fix the situation,” Mokoena said.

However, these residents said they were voting with the hope that what they had been waiting for over 20 years will finally be attainable — RDP houses.

The community of Emaphupheni, near Daveyton on the East Rand, have shut down a voting station as they protest about a lack of service delivery.
Politics
6 months ago

Mokoena said she registered for a government subsidised house since 1996.

“We have been waiting for houses. I still want my house. I am going to die without owning a house,” Mokoena said.

Cynthia Khumalo, 66, said she cannot continue to live in a family home.

“We love our party but they must do the right thing. We registered in 1996 for houses, she said.

Mavis Khumalo said she voted because she wants a house.

Despite a seemingly low turnout at a number of voting stations TimesLIVE visited on Monday, residents expressed hope about how voting might improve their situation.

In the Motsoaledi informal settlement, some 7km away from Dlamini, residents were also concerned about lack of proper housing, among a litany of other problems.

Sizakele Mkhosana, who says she has been voting since 1994, said she changed the party because she usually voted for because it did not do anything for her.

“They didn't give us houses. We have been staying in shacks for 27 years. There are no schools around here. Our children have to travel long distances to go to schools. We also need jobs,” Mkhosana said.

The community of Emaphupheni, near Daveyton on the East Rand, have shut down a voting station as they protest about a lack of service delivery.
Politics
6 months ago

RDP houses, the R350 social relief of distress grant and food parcels are the reasons some residents in Boikhutso township outside Lichtenburg, ...
Politics
6 months ago