Capitec Bank as puzzled as you are over naked lady, seen in other shops too 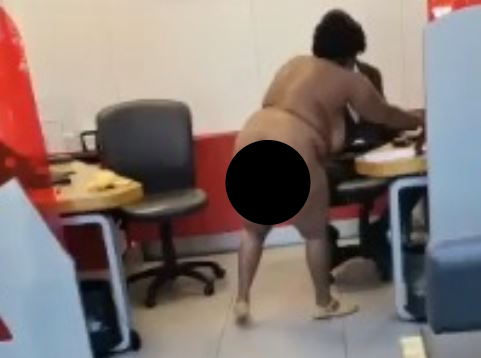 A naked and irate woman was filmed destroying property at a Capitec Bank service station in Cape Town this week.
Image: Screengrab

Capitec Bank has no clue why a naked woman entered its branch in the Strand outside Cape Town on Tuesday and trashed the place.

But it is offering counselling to staff traumatised by the incident.

A viral video shows the woman, wearing only a pair of shoes, rushing to a bank consultant’s desk and throwing the electronic equipment on the floor as the male consultant sneaks past her to safety. She is then seen in fleeting images (as the person recording her is also running to safety) trashing other equipment from nearby desks.

In 30 seconds, the woman is able to clear the area of customers while shouting.

The clearly distressed woman can only be heard asking “Where is the money?”

Capitec instituted an investigation but on Thursday said it had no insight into why the incident occurred.

“We have no further information about the reason she behaved this way as her words were inaudible. We are unfortunately unable to give more insight into her behaviour.

“We do know that she behaved in a similar manner in adjacent shops.

“We can confirm that while she has a savings account with us, she does not have any line of credit with the bank,” the bank said, commenting on the speculation on social media about what led to the fleshy protest.

“We have extended counselling to all affected employees through the AskNelson service [a service offering employees telephonic access to counselling, health information and education from registered health professionals]," the bank added.

This is not the first time an unusual incident has occurred at the hands of SA bank patrons.

In 2004 a disgruntled Absa client released five puff adders into the reception area of the bank’s central Johannesburg headquarters. He had been locked in a dispute with the bank for five years over car payments. He had told the bank he would “deliver some snakes to your premises” if the issue was not fixed.

In 2019 a woman urinated on the floor of a Kempton Park FNB bank branch. She alleged she had been waiting for over an hour and the toilets were locked and that she had no choice. A video of the incident was circulated on social media.

In April 2019, a woman crashed her Mercedes-Benz car into the Standard Bank branch at K90 Shopping Centre, Boksburg. This after she got angry at a teller for waiting in a long queue. The woman then stormed out of the bank, climbed into the car and rammed it several times through the bank’s entrance.

WENDY KNOWLER | What’s with the ghosting? When companies just ignore your complaints

Some firms claim to treat their customers right, but you’ll often find posts begging them to respond to queries
Opinion & Analysis
11 months ago

SYDNEY SESHIBEDI | Fighting the odds to help others do the same

A recent survey of 1,200 South Africans shows financial and pandemic-related worries are taking a severe toll on their mental health.
News
9 months ago

Even if you didn’t sign the contract with the school, if you’re a biological parent, you are jointly responsible for paying fees
Opinion & Analysis
9 months ago