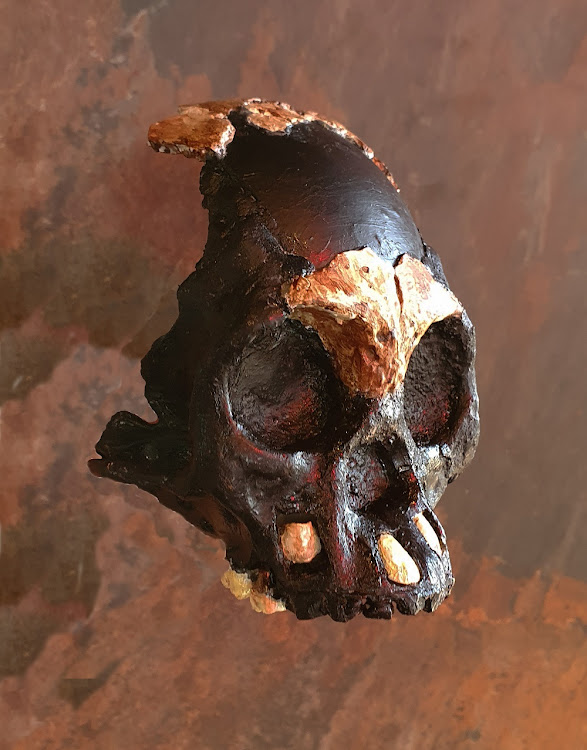 A replica of the tiny skull found on a ledge in the Rising Star cave system.
Image: Supplied by Wits University

A tiny skull of a Homo naledi child — aged four to six — has been revealed to the world, and augments the highly controversial theory that Homo naledi deposited their dead in a ritualised fashion.

The child’s skull and teeth were found on a little ledge in an extremely remote passage of the Rising Star Cave System, about 12m beyond the Dinaledi Chamber (the original site of discovery of the first Homo naledi remains).

The child has been named Leti — or in full, Letimela, which is Sestwana for “the lost one”.

Leti’s skull consists of 28 skull fragments and six teeth, and when reconstructed shows the frontal orbits and top of the skull with some dentition.

Speaking from the Cradle of Humankind on Thursday afternoon, Prof Lee Berger from Wits University said, “The most controversial thing we have said since the announcement of the discovery of Homo naledi a few years ago is that we could find no other explanation that the body was in such a remote cave, other than it being a case of deliberate ritualised body disposal.”

He said that most archaeologists thought that “a small-brained non-human species could not have been deliberately disposing of its dead”.

However, getting to these narrow, deep passages through what’s now called “Chaos Chamber” takes “extraordinary human effort”, since the place where the skull was found is only 15cm wide and 80cm long.

The skull can fit into the palm of a human hand, and several replicas have been made.

Berger said such an ancient skull of a child is “one of the rarest discoveries”, as child bones “are delicate and fragile and don’t preserve well”.

He said fossils of children are 20 times rarer than that of an adult, and that no other body parts were found near the ledge and there were “no signs of any forces of nature having moved the bones”.

This means Leti’s skull was likely deliberately deposited on the ledge by other members of the group.

While previously thought to be millions of years old, research in the past few years has revealed that the vast assemblage of Homo naledi bones is at most 330,000 years old.

Descriptions of the skull and its context have now been published in two separate papers in the Open Access journal, PaleoAnthropology, by the team of 21 researchers from Wits University and 13 other universities.

The skull of the child presented in the current study was recovered during further work in the cramped spaces of the cave in 2017.

“This is the first partial skull of a child of Homo naledi yet recovered and this begins to give us insight into all stages of life of this remarkable species,” says Juliet Brophy, who led the study on Leti’s skull and dentition.

Bird fossils ‘key’ to map of Cradle of Humankind landscape

A study has revealed the presence of a number of species, from rock-dwelling and forest birds to ducks and waders
News
1 year ago

The unearthing of two new hominin fossils is “exciting”‚ Dr Dominic Stratford said on Thursday‚ as “they possess a mixture of intriguing features ...
News
5 years ago

Homo naledi — our celebrated “ancestor” discovered with much fanfare two years ago at the Rising Star cave system in Gauteng — is now available for ...
News
3 years ago