‘I didn’t do it, but I’m sorry,’ Nomia Rosemary Ndlovu tells her victims 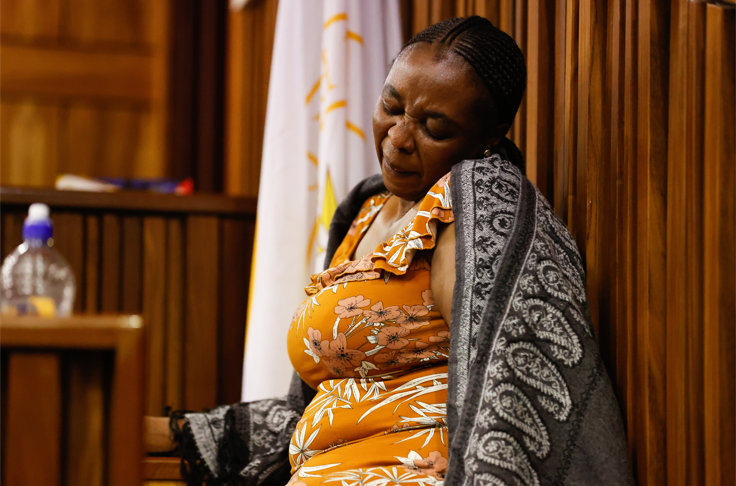 Killer cop Nomia Rosemary Ndlovu has been given six life sentences for a string of murders she orchestrated.

She was also sentenced to jail terms for defeating the ends of justice (five years), 10 years for four fraud counts, 10 years for each of the seven incitement to commit murder charges and 10 years for the attempted murder of her mother, Maria Mushawana.

The 46-year-old former police sergeant had been convicted of planning the murders of her partner and five family members to claim life insurance payouts.

The sentences will run concurrently.

Judge Ramarumo Monama handed Ndlovu a further five years on each count for trying to kill her sister, Joyce, along with Joyce's five children. For this, she gets a total of 25 years.

“Effective years of imprisonment is then life,” said Monama.

Earlier, Ndlovu gave an ambiguous apology to the families and friends of her victims.

Taking to the stand during the aggravation and mitigation of her sentence hearing in the high court sitting in Palm Ridge, Ndlovu said she was sorry for the pain felt by those affected by the six deaths, but maintained she was not the one who caused them.

“To the Mabasa, Homu, Motha, Mashego and Ndlovu families, I know they think I killed their family members, but I didn’t. The truth is only known by God, but I would like them to forgive me.

“To my mother back at home, remain strong and pray. To my siblings, I am still your sister and you should continue to see me that way,” Ndlovu said while she cried.

She told the court she had accepted her fate, adding that she harboured no resentment towards the court nor the investigating officer, Sgt Keshi Mabunda.

Ndlovu was alleged to have plotted from behind bars to have him killed. For this, she is to face yet another trial.

“Whatever the court decides, I have made peace with it and I welcome it,” she said.

“I am not angry with anyone. I am crying from pain because those people who died were all my relatives,” she told the court.

I am not angry with anyone. I am crying from pain because those people who died were all my relatives.

Ndlovu gave a “thank you” monologue to the officers who transported her to court every day, saying they treated her humanely.

She also thanked God “for bringing her this far”.

In her last words, she asked the court to consider moving her from the Kgosi Mampuru Prison in Pretoria where she was being kept to the Johannesburg Prison (Sun City). She said this would make it easier for her family to visit her.

Ndlovu was initially held in Sun City  but was moved to Kgosi Mampuru, a maximum-security facility, after her alleged plan to kill Mabunda became known.

She asked for clarity on what it was she was seeking forgiveness for.

“In their hearts and minds, they think I killed their family members,” said Ndlovu.

Placing her hand on her chest, Ndlovu said she did not do what she was found guilty of doing.

The 46-year-old former police sergeant was last month found guilty of killing her sister, her cousins, her niece, two nephews and her lover, Maurice Mabasa, in a killing spree of more than six years.

She was arrested after alleged hitmen she hired to kill her sister Joyce and Joyce's five children turned to police, halting what would have been her biggest killing.

On Friday, the state called five witnesses, four of whom were related to Ndlovu’s victims.

One by one, they took the stand and explained how she had upset their lives.

It was a question asked by judge Ramorama Monama that was most pertinent. What did Ndlovu have to show for the R1.4m she claimed in insurance policies for the deceased’s lives?

“She has no boyfriend, no child, no house. For someone who has seen that kind of money but have nothing to show for it is baffling,” said Monama.

Ndlovu said she paid for the funeral of her sister, Audrey Ndlovu, erected a tombstone for her and their father, renovated their mother’s house and supported Audrey’s children.

I can only forgive her if she can tell me the truth about how and where she killed my brother. I want to know how he died and maybe I can find it in my heart to forgive her.

With money she received from her lover’s policies, she put a fence around his mother’s house, bought her a water tank and paid a R25,000 deposit for his tombstone. She was still paying for it when she was arrested. She claimed she had supported his mother financially.

Williams dismissed this as lies, saying Ndlovu squandered the money in casinos.

The witnesses who the state called said Ndlovu did not help them at all.

Sharlene Mashego, who took custody of Brilliant Mashego when Audrey died,  explained how when Ndlovu later killed her grandson, Brilliant, she inherited the burden of raising his eight month old child. Mashego, now 72 and widowed, said the child’s mother had disappeared. She was worried about what would become of the five-year-old child should she die.

Lucy Mushwana said since Rosemary killed her son, Witness Madala Homu, suffering was all they knew. Homu was Rosemary’s cousin.

“I cannot forgive her because he was my only child,” said Mushwana, who said she was in disbelief that her sister’s daughter had killed her child.

Maurice Mabasa’s anger was palpable. He took to the stand and accused Ndlovu of lying about the fence, water tank, monthly upkeep and tombstone down payment.

“I can only forgive her if she can tell me the truth about how and where she killed my brother. I want to know how he died and maybe I can find it in my heart to forgive her,” he said.

Jabu Nhlapo, who was in a relationship with Zanele Motha, Ndlovu’s niece whom she killed, said he always knew she had been behind Motha’s death.

He said after the funeral, Ndlovu had wanted to take away the three children he shared with Motha but he refused.

“I could not let her do to my children what she did to their mother,” said Nhlapo.

He is raising the three children himself.

The most scathing testimony came from Lt-Col Almerie Myburgh, a criminologist specialising in serial murder cases.

Myburgh had been brought in by the state during the trial to monitor Ndlovu’s behaviour and consulted with her after her conviction.

Myburgh said Ndlovu could be classified as a serial murderer who stood little to no chance of rehabilitation.

She said Ndlovu’s failure to accept her actions and her denial made her a high risk of reoffending. She encouraged the court to keep Ndlovu behind bars.

Myburgh said she believed Ndlovu had a personality disorder, was manipulative and “got rid of anyone who got in her way”.

“She only focused on what she could gain and not the consequences,” she said.

Pre-sentencing proceedings of convicted cop Nomia Rosemary Ndlovu, who murdered her lover and five relatives are set to get under way at the high ...
News
6 months ago

EDITORIAL | While Ndlovu has been found guilty, who are the actual killers?

Former police officer Nomia Rosemary Ndlovu, who was accused of killing her lover, sister, cousin, niece and two nephews to cash in on life and ...
News
6 months ago