'I'll be back for you': Killer cop Nomia Ndlovu's chilling words to witnesses

After earlier cutting a sorry figure in the courtroom and breaking down, saying she was sorry for the losses her relatives suffered, convicted killer Nomia Rosemary Ndlovu snapped and told those affected by her crimes exactly what she thought of them.

Shortly after being told by judge Ramarumo Monama that she would serve life behind bars for all the people she had arranged to be killed, and for trying to have her mom, her sister and her sister's five children also killed, Ndlovu looked into the gallery of the high court, sitting in Palm Ridge. There, her aunt, her late lover’s brother and people who had testified against her were standing in a group.

“I will spend this Christmas in jail but, next year, I will be out. I will be back and you will see,” she said in a threatening tone, pointing at them as she spoke.

BREAKING WATCH #RosemaryNdlovu threatens one of the witnesses before she leaves to serve her life sentence. In Tsonga she says even though she is spending this Christmas in jail she will be out next year and she is coming for them.#eNCA pic.twitter.com/DxKnASrmKS

Investigating officer Keshi Mabunda called police to lead Ndlovu out of the courtroom. Dressed in the mustard and white dress she often wore to court, the killer cop stomped out of the courtroom, paying no attention to the media that had caught her threats on camera.

Ndlovu’s breaking point came after Friday’s proceedings delivered numerous blows to the disgraced police sergeant, who Monama had said had “soiled” the police’s blue uniform and tainted the image of her colleagues.

Her fury came after a failed bid to be given leave to appeal against both her conviction and her sentence, which her lawyer, Vincent Soko, had described as “too harsh”.

Ndlovu had also failed to secure a transfer to the Johannesburg central prison where she said she wanted to serve her sentence to be closer to her family. She is now being kept at the Kgosi Mampuru Correctional Centre in Pretoria, a maximum facility she was transferred to after she threatened Mabunda and allegedly hired a hitman to take him out.

Monama on Friday said Ndlovu was a danger to society and it was befitting for her to be kept at a maximum-security facility. He said, however, that it was not for him to say where she would serve her sentence.

After a trial that grabbed headlines, Ndlovu was handed six life sentences for each family member she killed — all so she could score life insurance policies.

People who lost their lives at the hands of Ndlovu were her cousin Witness Madala Homu, her sister Audrey Somisa Ndlovu, her boyfriend Maurice Mabasa, her niece Zanele Motha, and her brother Mayeni Mashaba. The last of her victims was Audrey’s son, Brilliant Mashego.

Her killing spree ended when a man she had hired to kill her sister, Joyce Ndlovu, along with her five children, turned to police.

They set up a sting operation, ultimately leading to Ndlovu being caught on camera saying how she wanted them to be burnt alive so she could cash in on insurance policies. The hit man's acquaintances also came forward  and testified how Ndlovu had also wanted her sister, Gloria Ndlovu, killed and had given a down payment to have her own mother, Maria Mushwana, killed. 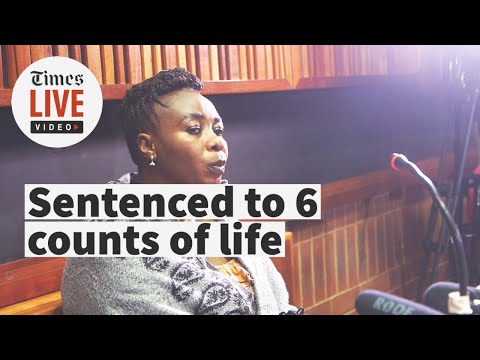 The motive for killing her relatives, the court concluded, was so she could cash in on large sums of insurance money. In total, Ndlovu pocketed almost R1.4m from her six victims' lives.

For trying to kill Joyce and her children, the court handed her five-year sentences for each of their lives. For trying to kill her mother, Ndlovu got 10 years. For tampering with the scene where her sister Audrey was found dead, she got five years.

She was also handed five years on each count involving her defrauding insurance companies — forging signatures and posing as her victims while she opened insurance policies in their names.

Monama said she would effectively serve life behind bars.

In Friday's proceedings, the court heard how a cloud of death had seemingly followed Ndlovu throughout her life.

Criminologist Lt-Col Almeria Myburgh told the court that Ndlovu had started dating at 18 and married her lover but he died in 2004, They had a son together, Jaunty, who died when he turned 13.

In a visit to Ndlovu's village last month, locals and her sister Joyce said there was suspicion surrounding her husband's and son's deaths. Hand Khoza had died after falling ill while their son, Jaunty, died from suspected poisoning while he was visiting Ndlovu in Johannesburg. Before his death, he had stayed with Ndlovu's mother in Bushbuckridge.

Myburgh told the court Ndlovu said she had dated a few men and then come across Maurice Mabasa. She and the American embassy employee moved in together and went on to have a child. He, however, was found bludgeoned to death in 2015. Their child, Makhanani, went to live with Mabasa's mother for several months but, according to his family, Ndlovu fetched the child unexpectedly one weekend. The child was in hospital before the end of the following week and died days later. A toxicology report could not conclusively conclude what killed her. She was two.

Ndlovu pleaded not guilty to all the murder charges, saying she had nothing to do with the deaths.

Ndlovu on Friday went down still maintaining she did not kill, plan to kill, or defraud anyone.