'This feels like democracy' - reaction pours in after LGE results 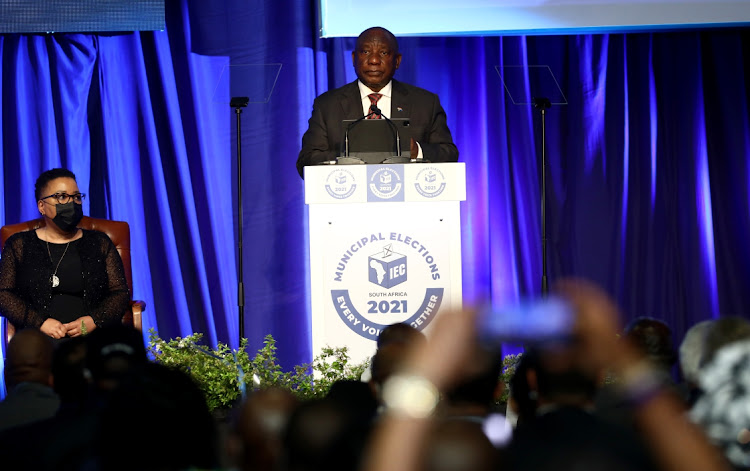 President Cyril Ramaphosa speaking during the announcement of the final results of the 2021 local government elections at the IEC results centre in Pretoria.
Image: MASI LOSI

Political parties and the local government elections have topped the trends on Twitter since the Electoral Commission of SA (IEC) announced the final results on Thursday night.

While some have expressed satisfaction with the results, others are sharing their opinions about factors that may have influenced the outcome.

Millions of South Africans took to the polls on Monday to vote in the local government elections after weeks of campaigning by politicians. The IEC said the election was contested by 325 political parties and more than 1,500 independent candidates.

IEC chairperson Glen Mashinini said the elections, in which 12.3-million people voted, were free and fair.

Speaking during the announcement of the final results in Pretoria, President Cyril Ramaphosa said the contestation of different political parties and independent candidates show that all South Africans have an equal chance to run for public office, which enriches citizens and the country's democracy.

“In the run-up to election day, we have seen images of parties and candidates everywhere − on the billboards of our country, street poles, social media — all making a case for why they should get the vote of the people of SA.

“This is a sign that multiparty politics is flourishing in our country and that any South African and, indeed, everyone has an equal chance and opportunity to run for public office,” he said.

A national overview of the outcome of #LGE2021. In terms of the 213 municipalities contested:

The final results show that in the eight contested metropolitan councils, the top three parties are the ANC, DA, and EFF. In the city of Johannesburg, the ANC managed to get 33.60%, the DA 26.47%, and the EFF 16.05%.

In the eight contested metropolitan councils, the top three parties are: pic.twitter.com/RtloVVhIzG

In the eight contested metropolitan councils, the top three parties are: pic.twitter.com/hztXRvAjTi

Here is a selection of voter reactions:

The real winners in this election are the people of KZN... they literally put their vote into action and showed the ANC and the rest of us that its possible. #ElectionsResults2021

#ElectionsResults2021 I love how the results turned out, this indeed feels like democracy. This challenge will keep our leaders in their lane, I feel less corruption ahead because the competition is tighter! pic.twitter.com/xuazIVEgzi

Even with an ultra-low voter turnout that should benefit the DA, the party only managed to get 21.8% of the vote. Down from 26.9%.

If Maimane had to step down, Steenhuisen and Zille absolutely must. #ElectionsResults2021

The ANC has won outright one metro and three district municipalities in KZN, in what is a significant blow to the party.
Politics
9 months ago

The Electoral Commission’s (IEC) announcement of the final results of the 2021 municipal elections is scheduled for Thursday evening.
Politics
9 months ago

Former DA MP Phumzile Van Damme has reflected on her exit from politics, saying she is enjoying watching the results of the local government ...
Politics
9 months ago