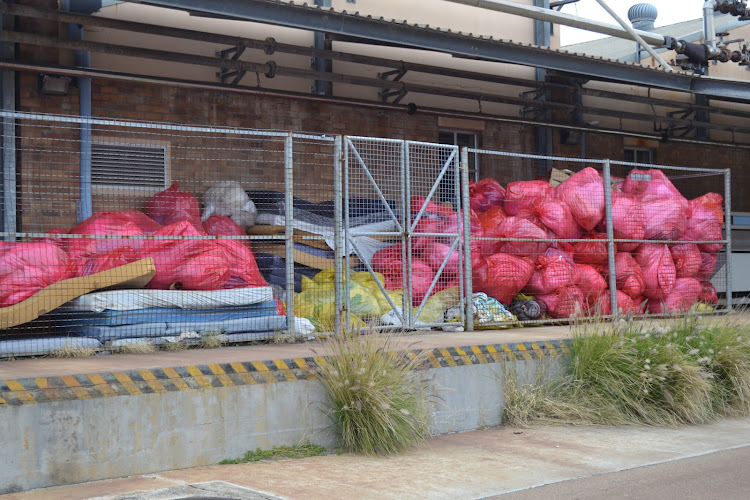 When Thembisile Nogampula was admitted as a patient at Livingstone Hospital on March 24 this year, he says he was allocated a bed but no sheets and pillows.

There were other patients in his ward who slept on bare mattresses and some patients were in beds with dirty linen, he tells Spotlight.

Nogampula is the deputy chairperson of the Treatment Action Campaign in the Eastern Cape.

He says he was admitted to the vascular clinic for further assessment and a scan after surgery on his left foot. He says it took courage to complain and get the nurses to bring clean linen for him and the other six patients, as there was no fresh linen in the laundry room in their ward.

“Other hospitals in Nelson Mandela Bay also have a crisis when it comes to the provision of linen, but it is a nightmare at Livingstone Hospital because it receives many patients referred by other hospitals.”

Nogampula says he spoke to the hospital’s quality assurance manager and handed over the list of grievances, but the hospital management denied that there is a linen shortage.

Another patient, Ntombekhaya Ralgana, had a similar experience to Nogampula at Livingstone Hospital. During Spotlight’s visit to the hospital in September, Ralgana had just been discharged.

Ralgana says many of the patients she saw relied on their families to bring them pyjamas, gowns, and blankets since there was a shortage of linen at the hospital. “I have been to Dora Nginza [Hospital] and Port Elizabeth Provincial Hospital for surgeries, but this is the only hospital that is battling with linen. I don’t know why Livingstone is battling with linen when other hospitals are not.”

Another woman who spoke to Spotlight claims her mother was left for days in a bed with dirty linen in Livingstone Hospital. “There was no linen in my mother’s ward and no nighties or gowns. We had to bring her own [sleep wear] from home. My mother was sleeping on bloodied linen for days and nurses saw that and not one of them changed her bed,” the woman says. She says they complained about this to the nursing staff but did not lay a formal complaint.

The Eastern Cape health MEC’s spokesperson, Mkhululi Ndamase, did not respond to requests for comment on these allegations by the time of publication. 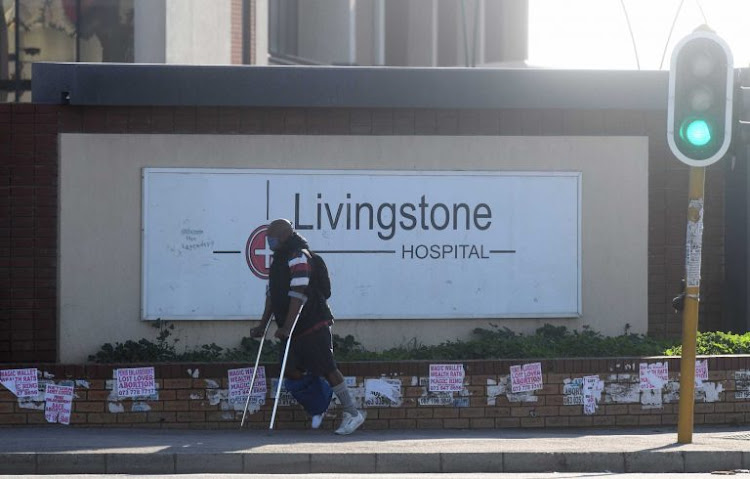 The National Health Act provides that any person (including patients) “may lay a complaint about the manner in which he or she was treated at a health establishment and have the complaint investigated”. According to the national guidelines to manage complaints, compliments, and suggestions in the public health sector, these complaints “must be resolved within 25 working days”. Former health minister Dr Zweli Mkhize last year, in response to a question in parliament, said that complaints should be lodged at the point of care (for example the public health facility) where the incident took place. “Should the complainant feel that the facility has not addressed their concern to their satisfaction, they may escalate the complaint in writing to the relevant district health office or the provincial health department. As a last resort, when complainants are still aggrieved with the outcome at these levels, they can lodge their complaint with the health ombud at the office of health standards compliance.”

Putting the importance of clean linen into perspective, one expert who helped draft SA’s new national guidelines on infection prevention and control said linen in hospitals has an important role to play in containing infection and is one of the standard precautions for infection-prevention control. She did not want to be named.

“There are parasitic infestations like scabies and bacterial infections, particularly healthcare-associated, multi-drug resistant pathogens that can be transmitted through linen. If the linen is bloodstained, there is the possibility of transmitting blood-borne viruses. If the hospital bed mattresses are damaged, which they frequently are, it can become a major source of skin and soft tissue infection. Even cases of tetanus have been traced back to damaged mattresses and contaminated linen,” she says.

“Personal clothes are only permitted in the maternity units, where the women are healthy and can manage their own clothes perfectly. In most instances, it is expected for the hospital to provide a patient gown so that physical examination can be carried out with ease. The other reason is for the patient to be able to use a bedpan without soiling the linen or their own clothes,” she explains. 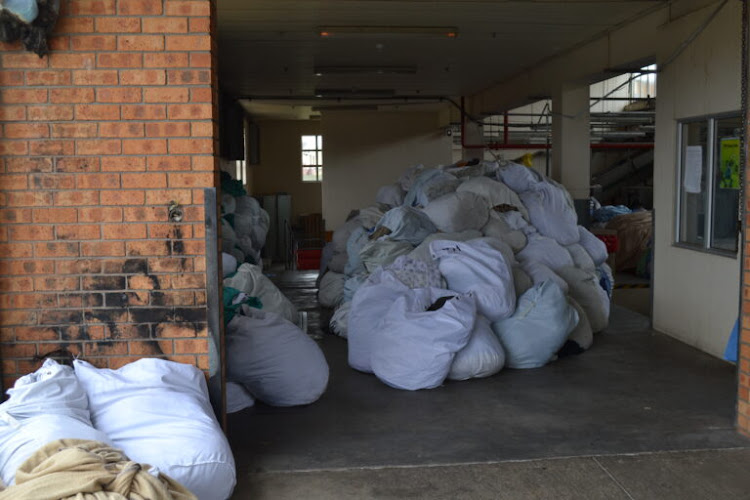 Some patients at Livingstone Hospital rely on their families to bring them pyjamas, gowns, and blankets due to shortages of clean linen and patient gowns.
Image: Luvuyo Mehlwana/Spotlight

Meanwhile, a nursing sister at Livingstone Hospital says when they run low on linen and if the bedsheets are still usable, they do not change the bedding. “[But] in some cases patients sleep on filthy linen and that can cause infections and may also expose patients to other diseases. Some patients would plead with relatives to bring them their own pyjamas because there are no fresh and clean pyjamas,” she says.

The recently published National IPC Strategic Framework and manual recommends that the “hospital bed linen and towels of patients must be changed daily in critical care and high care areas and must also be changed between patients and at regular intervals depending on whether the linen is soiled, or every two to three days in the wards. In all cases, the bed linen and towels must be changed immediately when they become visibly soiled. Mattresses that are visibly soiled should be cleaned with a detergent and water and disinfected,” the framework states. “Patients should not be allowed to bring their own linen to health facilities.”

The framework also recommends that “adequate resources must be provided to ensure effective laundry [cleaning] of linen, including for proper maintenance of laundry building and laundry equipment. All healthcare linen, irrespective of where it is processed (in-house or outsourced), must go through a laundry process that meets IPC standards such as transportation and storage of linen.”

When Spotlight put the issues relating to linen and laundry services at Livingstone Hospital to the superintendent-general of the Eastern Cape health department, Dr Rolene Wagner, she said there are interim measures in place to ensure the provision of linen services to hospitals.

However, during visits to Livingstone Hospital on three consecutive days in September, Spotlight found heaps of soiled sheets, blankets, mattresses, and gowns piled up outside the hospital laundry hall.

One staff member at the hospital, who wanted to remain anonymous for fear of victimisation, described the situation as dire and called for top provincial managers to visit the laundry department to see the situation for themselves. 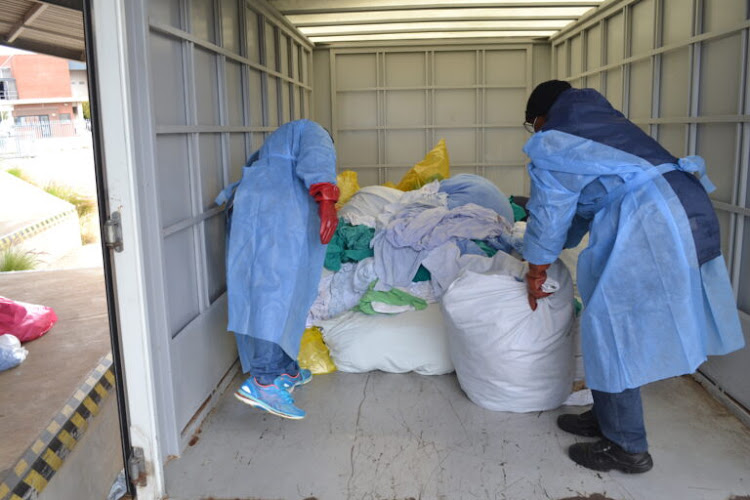 “This has been happening for years since our old machines broke down and those machines were supposed to have been scrapped and replaced,” she says. “Instead, the department spent millions of rand on maintenance since the machines started to show signs of ageing around 2010. [So] they never bothered to monitor those machines. When the problems arose again, they dumped the machines and issued out a tender to outsource the laundry services but recently, (early this year) the department terminated a contract with a private laundry service and [again] opted to wash its own linen. How are we going to be able to wash lines from Livingstone Hospital and Port Elizabeth Provincial Hospital when we have only one functional machine?” she asks.

“Two blanket and comforter machines have been dysfunctional for the past nine years and only one out of three iron presses has been functioning for the past three years. That working machine can load an average of 8,000kg of linen a day. We tried to cope with loads of washing over the years, but now we can’t take it any more. We now asked Dora Nginza Hospital to stop sending its linen to us,” she says.

“In the good old days, we used to have plus-minus 100 staff members that included twelve supervisors. Now, we only have 34 staff members, including two supervisors, and we haven’t had a manager since 2018. Our inhumane working conditions are demoralising and we call on the health MEC Nomakhosazana Meth and Dr Rolene Wagner to do the right thing. The smooth running of facilities within the healthcare system should be of paramount importance to them,” the employee says.

Health authorities in the province say they are aware of these challenges.

Wagner says providing clean linen is an integral part of infection prevention and control in a hospital. She says the washing of hospital linen is regulated by the SABS and governed by the office of health standards compliance frameworks.

“In 2004, a regional laundry plant was commissioned at Livingstone Hospital and the facility offered laundry washing services to all hospitals, clinics, and emergency medical services in both Sarah Baartman and Nelson Mandela Bay districts. Ten years later, (2014), there were significant maintenance challenges due to the ageing of equipment,” she says. 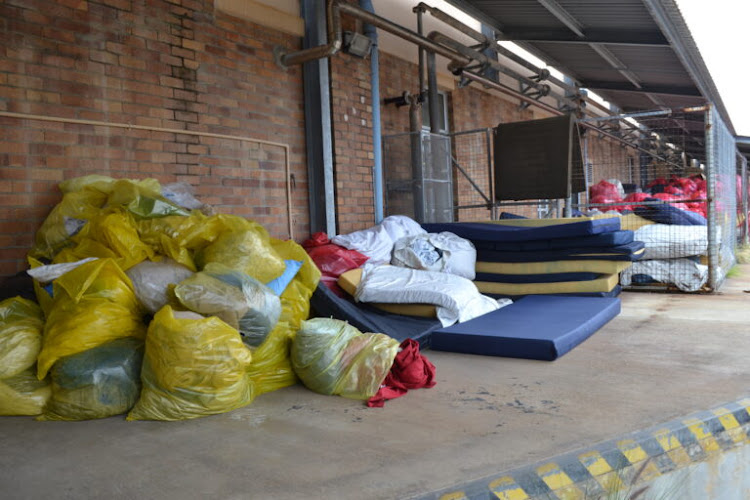 “The breakdown of machines affects the normal running of the laundry [service], resulting in backlogs to meet the service needs of the hospitals. Due to backlogs, other hospitals pulled out of the joint service and opted to use private laundry services. The provincial infrastructure unit recommended that the facility must be kept running, albeit at a lower output rate.”

“The persistently high maintenance costs of the facility put a lot of strain on Livingstone’s budget, and the facility has been declared undependable because of the frequent breakdowns. To mitigate this challenge and ensure continuous provision of linen, we have had to outsource the washing of linen to two private service providers in the last financial year.”

The contracts cost the department about R1.4m for the one financial year.

“We outsourced the services to Chitezi Pty Ltd, trading as Spin Cycle Laundry. The value of the tender was R500,000 at a rate of R39.90/kg and the company was paid a total of R499,210. The second company was Ngamandla Trading Enterprise. The contract was valued at R913,720. Both contracts ended in the last financial year,” she says.

“Livingstone,” Wagner says, “has decided to [now] outsource laundry service for a period of two years to allow the provincial infrastructure [directorate in the provincial health department] to overhaul the facility.” According to Wagner, the tender to outsource laundry services at Livingstone Hospital was advertised in September this year. “The project is expected to end in 2023, and this will improve services significantly,” she says.

“The provincial infrastructure directorate,” says Wagner, “has developed a three-year project plan to revitalise the regional laundry facility. A large linen bank is being established with the help of the provincial infrastructure unit. This will be established incrementally to give us two months’ linen capacity and this will insulate services from disruption in the event of both planned and unplanned breakdown of laundry machines. This is a 12-month project and shall be completed by the middle of the next financial year.”

The Gauteng health department pays R450,000 a month for repairs and maintenance of CCTV equipment.
News
7 months ago

The Lenmed Group has denied that the decuplets known as the “Thembisa 10" were delivered at Zamokuhle Private Hospital in Thembisa.
News
7 months ago

The nation is breathing a collective sigh of relief as Covid-19 infections drop to their lowest level since the first few weeks of the pandemic.But ...
News
7 months ago