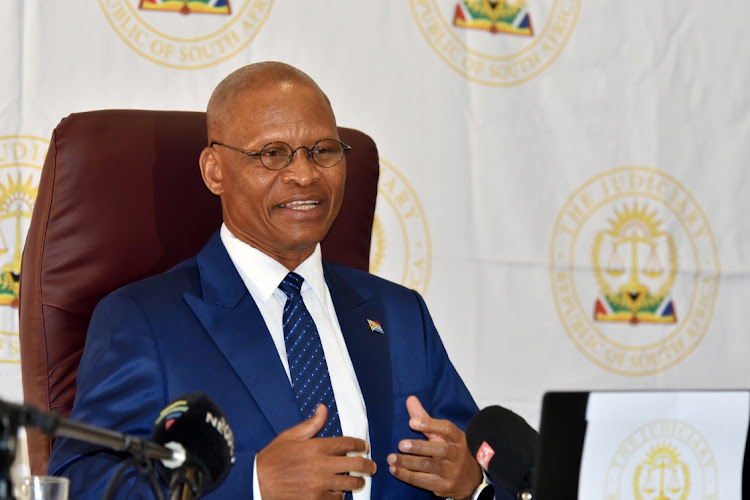 He questioned whether the government trampled on South Africans' fundamental rights when deciding on the lockdowns and vaccines.

Mogoeng was speaking at an event organised by the Forum of Institutes Supporting Democracy (FISD), which is chaired by public protector Busisiwe Mkhwebane.

According to Mogoeng, the government ought to have consulted, through public debates and at the National Assembly, before limiting people’s rights through different levels of lockdowns.

During the height of the Covid-19 infections, Ramaphosa, through the advice of scientists in the national coronavirus command council and the cabinet, decided on the nature of lockdown levels on which to place the country.

Mogoeng believes this was wrong and did not meet the minimum constitutional requirements.

“Why have we allowed a structure that is neither constitutional nor statutory — a command council, a minister of Cogta and the president — to interfere with our entrenched fundamental rights in this manner and to extend lockdown as easily as they do and in circumstances where more accountability would have been experienced if the National Assembly was allowed to enjoy its constitutional rights,” Mogoeng said.

South Africans should be insisting on open and public debates around the pandemic, Mogoeng urged.

Mogoeng retired from his position as the chief justice last mont .

Why, he asked, does the government prefer a state of disaster management when the pandemic is clearly a state of emergency.

“These are some of the pertinent good governance related questions that affect on our constitutional democracy,” he said.

According to Mogoeng, there was a level of secrecy associated with the handling of the pandemic, especially on budget and expenditure.

Mogoeng said despite Ramaphosa in April last year announcing a R500bn injection into the economy as part of the extraordinary Covid-19 budget.

He told the conference that the government was not transparent on whether there was corruption during the pandemic.

This was despite the several updates the Special Investigating Unit (SIU) gave to parliament on its ongoing probe into the R12.3bn procurement of personal protective equipment.

“Is there corruption being perpetrated during this epidemic? Are pointed questions being asked persistently and the necessary investigations being embarked upon by parliament, media, analysts or academia, the public or Chapter Nine institutions or other human rights driven institutions?," Mogoeng asked.

“Or have we all been beaten into submission by the fear of being routinely demonised, investigated or lied about?”

“Are we all afraid of the ever ready and shameless propaganda or smear campaign machinery?”

Mogoeng said there were video clips and articles questioning “fundamentals” of Covid-19 that have been “routinely” taken off media platforms.

He dived into the vaccines by asking the conference why institutions supporting democracy allowed themselves to be “gripped by cowardice” when it came to exercising the right of freedom of expression where they differed with the administering of the vaccines.

He questioned the mooted vaccine passports, asking if they were not in a way tantamount to forcing people to vaccinate by denying unvaccinated people access to some spaces.

In his later years Mogoeng Mogoeng seemed to retreat from the fray — at a time when leadership of an embattled judiciary was sorely needed, writes ...
Opinion & Analysis
6 months ago

The office of the chief justice should be squeaky clean, which is why judge John Hlophe should also withdraw
Opinion & Analysis
6 months ago

Part two of a series on the chief justice's time in office traces an arc from his thundering defence of public interests to his tetchy chiding of ...
Opinion & Analysis
6 months ago