Image: Twitter The Brookside Mall in Pietermaritzburg was among retail centres targeted in July. File photo.

The aunt of slain 17-year-old Sibahle Nguse has called for justice after he was shot dead during the civil unrest which gripped parts of KwaZulu-Natal and Gauteng in July.

On Monday, Zama Nguse was the first witness to provide oral evidence at the SA Human Rights Commission (SAHRC) investigative hearing into the unrest and looting between July 8 and 19.

Nguse recalled how their informal settlement alongside Khan Road in Northdale, Pietermaritzburg, turned into a war zone on the morning of July 12 when her nephew was allegedly shot by armed community members.

Nguse, an unemployed mother of two children aged 12 and nine, said she had been living in the informal settlement since 2003, which is situated 5km from Brookside Mall that was looted and torched during the unrest.

She told the commission that on the morning of July 12 a number of vehicles with Howick registration plates (NR) were seen in the area. 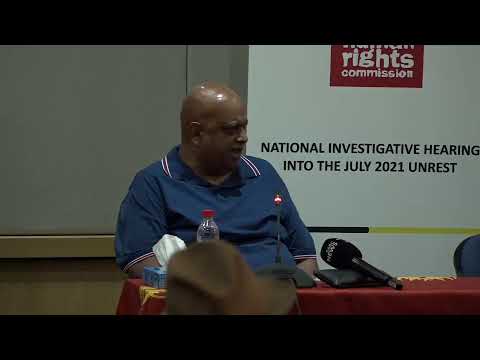 She said their settlement was across the road from a number of businesses which were looted in the hours that followed.

“People were trying to get to a place of safety because teargas fired by private security had been thrown into their homes. Myself and my kids, together with my sister and her kids (including Sibahle), ran to my sister's house and we closed the door. After we closed the door we heard an explosion. We got out of the house and fled.”

She said Sibahle got lost during the ensuing chaos.

“Sibahle wasn't aware in [which] direction we ran and was looking for us. A man later told me Sibahle had been shot. I asked him what he was talking about. When I got up to the area where he was last seen, I found his siblings holding him. I had never seen a person dying before — when I saw him, it looked like he was gasping for air.”

It was painful. Sibahle was an intelligent child and he was everything to us. All that we need as a family is to see justice being served.

Scrambling to save her nephew, the family bundled the teen's body into a vehicle and rushed to Northdale Hospital.

Nguse said shortly after reaching the hospital, she was informed by doctors that Sibahle had died due to a wound to his chest.

She described the bullet hole as being very small - something that could resemble a buckshot pellet.

“It was painful. Sibahle was an intelligent child and he was everything to us. All that we need as a family is to see justice being served.”

Over the next three weeks, the SAHRC panel — comprising commissioners André Gaum, Chris Nissen and Philile Ntuli — are set to report and make recommendations on:

Gaum, who is the chairperson of the panel, said the commission will visit the areas of Northdale and Phoenix on Wednesday to get a better understanding of the socioeconomic impact after the riots.