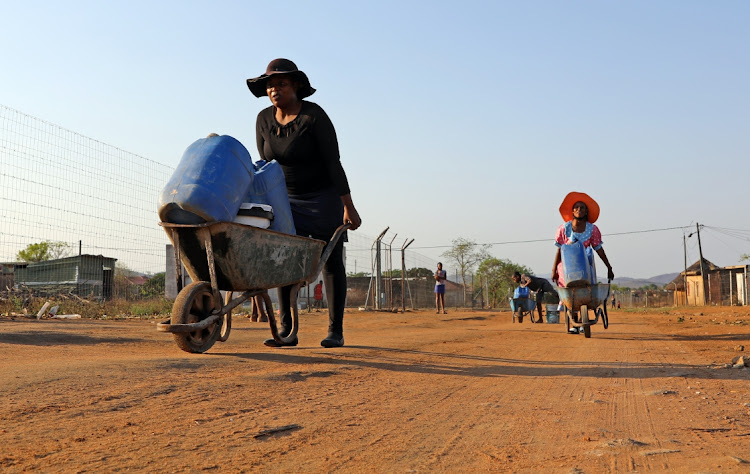 As a huge water pipeline project was being carried out by Rand Water in Gauteng on Monday, water and sanitation minister Senzo Mchunu said his office was looking at providing support to other provinces experiencing water woes.

Mchunu touched on the longstanding issues in Gqeberha in the Eastern Cape and eThekwini in KwaZulu-Natal.

“We are in constant communication with our office in the Eastern Cape and we have been informed of the challenges in Gqeberha as a result of the decreasing dam levels caused by an increase in demand. This will affect activities in the CBD, industrial areas and some suburbs towards the western side. To address this, we need to realise the completion of the Nooitgedacht water scheme, which we are attending to,” he said.

“To avert ‘day zero’ and work towards water security in the area — and the country as a whole — compliance with water restrictions needs to be emphasised and adhered to. In the meantime, affected areas on the western side of the metro will be supported by tanks and tankers as there will be a reduced water supply of about 25% as and when needed.”

In eThekwini, Mchunu said, the Umgeni and eThekwini metros were looking into conducting maintenance of their infrastructure responsible for water disruptions.

Load-shedding has caused sewage to flow into the Durban harbour while large parts of the city and surrounds battle water disruptions.
News
2 months ago

“Overall, eThekwini metro has a challenge of ageing infrastructure. This is resulting in frequent failures in some areas. Umgeni Water, together with the eThekwini metro, issued a joint statement this morning, advising of the water supply interruptions due to a shaft pump failure at the Durban Heights waterworks,” Mchunu said.

“This has affected a number of reservoirs including in Umlazi, Phoenix, north of Durban, Mountain View and Verulam, which were already under strain. The estimated time for the completion of the work is said to be five weeks.”

Rand Water said this will provide the extra flexibility needed during future shutdowns and maintenance and will ensure that all the city’s water needs are met well past 2040.

Mchunu clarified that the term “shutdown”, which was being used by Rand Water, was not meant in a literal sense. “It is rather a technical term used in the industry — and does not mean that there will be no water coming out of the taps. This briefing serves to explain just that,” he said, allaying the fears of affected communities.

The “shutdown” was expected to last until Wednesday.

Gauteng's water supply will be cut off for 54 hours starting on Monday at 5am while the system gets a much needed upgrade.
News
2 months ago

The operation has caused a halt of some services, including cases due to be heard at the Johannesburg high court. The Johannesburg Zoo has also shut its operations for the three days.

The Gauteng health department was on high alert and ready to provide water to any of its facilities which may be affected. No disruptions were initially reported at provincial hospitals.

Mchunu said his department would work hard to ensure it delivered on its mandate to provide quality water.

“We are working tirelessly to ensure that we deliver quality water and sanitation services to all the citizens of the country. This will require the concerted efforts of the government, the private sector, civil organisations and citizens.

“SA is a water-scarce country and we need to continue using water sparingly.”

'We are on our own,' says NW village as political parties come knocking

Welcome to the village of Madidi, where residents lock their gates against the campaigning politicians who have brought them neither water nor power
News
3 months ago

Politicians on the stump are turning to one of  the most pressing problems in a country that is  struggling to overcome mismanagement, drought and  ...
News
4 months ago

OPINION | 'How hard can it be to live without water in a place set up to handle such a crisis?'

"It’s an ongoing survival routine that has become normal life in towns where turning a tap is no guarantee of a cup of drinkable water, and a hot ...
Ideas
6 months ago