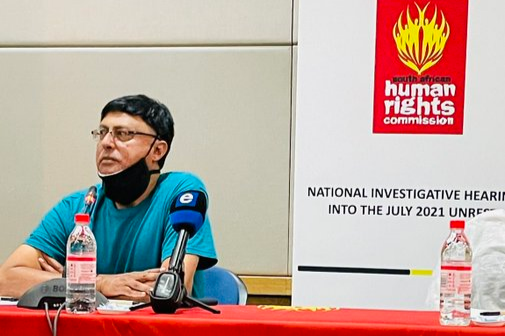 Accounts of racial tension, assaults and killings of Africans, allegedly at the hands of Indian people in Phoenix, were aired during day 2 of the investigative hearing by the SA Human Rights Commission (SAHRC) into the July civil unrest.

The hearing in Durban is looking at the causes of the civil unrest which claimed 36 lives in Phoenix, north of Durban.

Bhambayi resident Chris Biyela told the commission on Tuesday that he narrowly escaped the wrath of an angry group of Indian people while driving through Phoenix.

“Two Indian people stopped my car and asked me what I was doing there. I was coming in for a severe beating until one of them said he knows me. I have had to endure recurring nightmares which prompted me to seek professional help from social workers,” said Biyela.

The July incidents of violence severed relations between different communities in the area, and during the height of the unrest they had received word that police minister Bheki Cele had visited the Phoenix area.

The aunt of slain 17-year-old Sibahle Nguse has called for justice after he was shot dead during the civil unrest which gripped parts of ...
News
6 months ago

“This has really angered the community who were questioning Cele for not visiting the black community, but he went to Phoenix,” he said.

Two days later, Cele visited the community and addressed several thousand black people where he expressed regret for not speaking to them earlier about the violence.

“Cele had told us that he had not really been briefed earlier and that was why he had gone to Phoenix. The community told him that they wanted an investigation into the deaths of people at the hands of Phoenix residents,” Biyela said.

Cele undertook to assign 10 detectives to investigate the unrest, who would work alongside three community members from the affected communities.

Biyela also told the commission he had heard harrowing stories of how Indian people resorted to ill-treating their black workers after the riots in Phoenix.

There was a lack of assistance from the SAPS and we were outnumbered. They were absolutely no help. The evidence is there.

Another witness, Thulani Mseleku from Inanda, said he was attacked at traffic lights during the unrest. He said one of his attackers had snatched his Versace sunglasses and he was treated for head wounds at the hospital.

Community activist Sham Maharaj, who represents the Phoenix Ubuntu Forum — comprising various NGOs and residents of the Phoenix area and formed in the aftermath of the violence — also gave an account of events in Phoenix.

Speaking about the shootings, Maharaj said the killings were not a massacre because the people who died were not all shot at one time. He drew a parallel to the Marikana massacre in 2012 when 34 miners were shot dead by police. But evidence leaders were adamant that the deaths should be regarded as a massacre.

“If you want to maintain that, then I am OK,” said Maharaj.

The hearing, which began on Monday, is expected to sit for three weeks. The scope of the hearing is to determine the loss of life, the targeting of retail centres, schools, transport systems and hospitals, and how the unrest worsened inequality, poverty, hunger and food insecurity.

It will also look into reports that many communities who took to the streets displayed excessive use of force, racial profiling, arson and killings, and rumours that the unrest was orchestrated.

LISTEN | What happened in Phoenix are killings, not a massacre, SAHRC hears

Phoenix Ubuntu Forum’s Sham Maharaj said what happened in Phoenix during the July unrest were killings, not a massacre.
News
6 months ago

Maharaj said the violence had been worsened by a shortage of police officers, coupled with the irresponsible use of social media platforms.

“There was a lack of assistance from the SAPS and we were outnumbered. They were absolutely no help. The evidence is there.”

He said “half truths” were being shared on social media. “Social media was abuzz with commercial media, print and visual media — not deliberately doing it, but trying to catch a juicy story out of a sad situation,” said Maharaj.

He recounted how he had objected to a video purporting to be from Phoenix and which had gone viral. “The video was instead from the Cornubia area,” said Maharaj.

He hoped the commission would consider making a recommendation on punishing those who use social media irresponsibly. He said the Ubuntu Forum was created to deal with the aftermath and what the community could do to keep “the temperatures down”.

The hearing is led by commissioner Andre Gaum, assisted by deputy chairperson Chris Nissen and Philile Ntuli, who is the chief panellist.

The hearing continues on Wednesday.

“We never thought the torching of trucks at Mooi River would end up being the most expensive riots in the world, bigger than the riots claims in ...
News
6 months ago

The grieving family of an accused arrested for a murder during unrest in July, Jeetendra Jaikissoon, has vowed to continue attending court in a bid ...
News
6 months ago