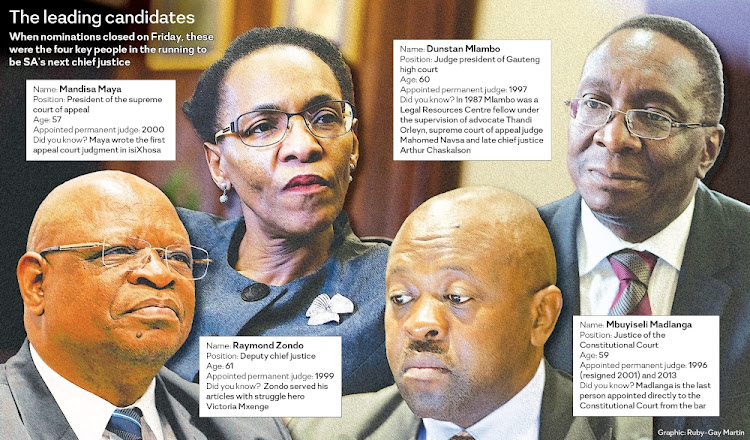 President Cyril Ramaphosa confirmed that the four had been put forward as the final candidates for the highest judicial office in the land.

On Wednesday, the presidency said that the names had been submitted to the Judicial Service Commission and leaders of parties represented in the National Assembly.

This comes after Ramaphosa invited public nominations for the position in September after former chief justice Mogoeng Mogoeng left officer on October 11.

A panel evaluated the nominations made by the public and shortlisted those who fulfilled the advertised requirements for nomination.

Ramaphosa's office said he made his final selection after considering the panel's report.

Public protector Busisiwe Mkhwebane has withdrawn from the chief justice race, the presidency announced on Friday.
News
1 month ago

Inquiry secretary Itumeleng Mosala recounted efforts by one of the commission's investigators who sought to get Arthur Fraser to provide information ...
News
1 month ago

Former spy boss Arthur Fraser has formally objected to the nomination of deputy chief justice Raymond Zondo as a candidate for the position of chief ...
News
1 month ago