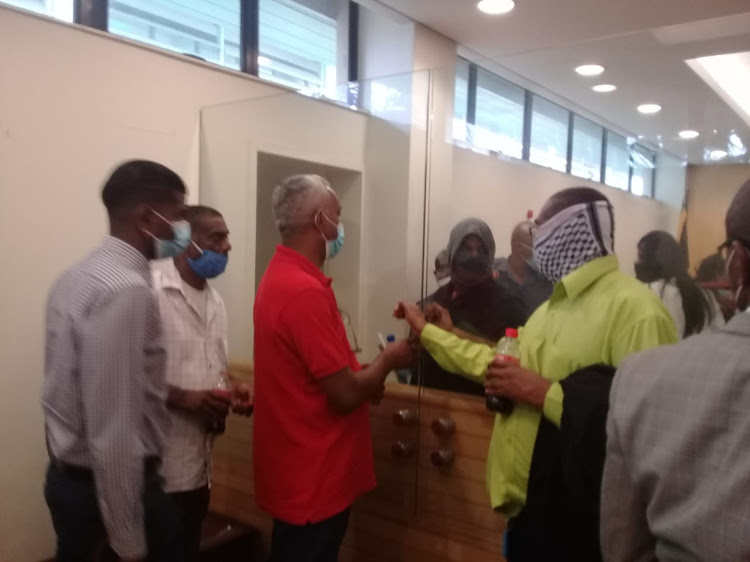 Relatives talk to Dylan and Ned Govender after they were refused bail in the Verulam magistrate's court on Thursday.
Image: Mfundo Mkhize

A Verulam magistrate has denied bail to siblings Dylan and Ned Govender, who are accused of murdering Mondli Majola in Phoenix during the height of the July civil unrest.

The siblings are also charged with attempted murder.

Magistrate Irfaan Khalil said he had taken all evidence brought before the court into account, including video footage of what transpired on July 12, affidavits filed and the cross-examination records of all the witnesses.

He said the state is alleging that four unarmed men were walking to Cornubia via Desert Palm Road in Phoenix when they were confronted by the accused, who chased them away.

The four ran and sought refuge in houses. Khalil said while an angry group of Phoenix men chased after the men, Majola had slipped and fallen. It was then that the two accused pounced on him.

Khalil said Dylan had allegedly been carrying a gun, while Ned is said to have  brandished an object.  He said it is alleged that Majola had been attacked by Dylan when he fell.

Khalil said he listed to the testimony of the investigating officer Sgt Siphosenkosi Shezi, who is part of the 31-member task team investigating the riots, as well as that of  pathologist Dr Sibusiso Ntsele, who was brought in to aid the state in proving their case that Majola had been shot.

This was after the body of the 19-year-old had been exhumed in the Eastern Cape.

He said Ntsele had asserted that Majola had been shot in the head and on the right thigh, which caused his death. A  Dr Steven Naidoo, a man he described as having considerable experience, was adamant that Majola would have had superficial gunshot wounds. Khalil added that a ballistic expert identified as Styles was also brought in by the defence to lend credence to its version.

Khalil said that in making his decision, he looked at the siblings' personal circumstances and rejected claims which suggested that their family business would fold in their absence.

The magistrate said even though the siblings claimed that they were not a flight risk as they did not have passports, this did not mean there was nothing deterring them from skipping the country.

“It provides no guarantee,” he stressed.

The SAHRC hearing into the July unrest in Phoenix in KwaZulu-Natal continued on Wednesday.
News
7 months ago

Accounts of racial tension, assaults and killings of Africans, allegedly at the hands of Indian people in Phoenix, were aired during day 2 of the ...
News
7 months ago