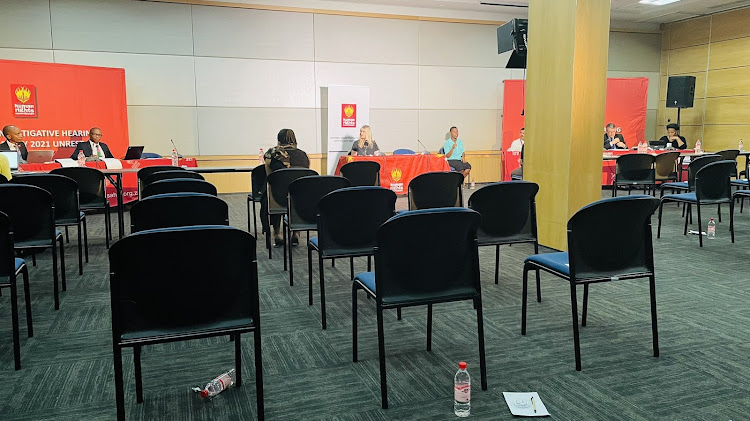 Pietermaritzburg & Midlands Chamber of Business head Melanie Veness was close to tears as she recounted scenes of atrocities committed during the height of civil unrest in the city in July.
Image: SAHRC

Barnsley Road in Pietermaritzburg resembled a “war zone”, with dead bodies lying twisted on the ground on the adjacent river bank and all but one business completely looted and burnt.

This was the testimony of Pietermaritzburg & Midlands Chamber of Business CEO Melanie Veness on Thursday before the Human Rights Commission, which is probing the devastating rioting in KwaZulu-Natal which left 300 people dead and caused damage estimated to run into billions of rand.

Veness told the commission that on the day she went to Barnsley Road “it just didn’t seem real. It was complete devastation ... It was not just about looting, it was about destroying.”

She said she had no doubt that the violence was a “well-planned insurrection” because of the modus operandi. “People first disabled the water sprinkling systems so that fires could not be put out. They brought petrol with them and then they spray-painted on walls ... they destroyed everything and then defecated all over the place.

“I walked past young bodies ... it was terrible. That was someone’s son — the same age as my son — and they were not going home.”

The Pietermaritzburg & Midlands Chamber of Business CEO says the July riots were part of a plan to overthrow the government.
News
2 months ago

Barnsley Road serves the large township of Edendale. She said among the businesses looted and burnt were the China Mall, Makro, South African Breweries and Asmals.

“It looked like a bomb had gone off,” Veness said.

The bodies “discarded like rubbish” had no visible injuries and she could not say whether they had been killed in a stampede, died of overindulgence in looted alcohol or had succumbed to the cold weather overnight.

“But it made me wonder what kind of people, whoever were behind this, would allow this to happen with no concern for the consequences for the people caught up and killed, and for the people who lost their livelihoods.

“It was a nightmare to stand there and say, 'This is our city.'”

Among the messages spray painted on walls and vehicles, were “Zuma is the best president”, “Free Zuma”, “F... all white people” and expletives about white monopoly capital.

The fundamental belief is that when someone attacks your business and home, there will be an adequate response from the government ... There was no response. It was horrible awakening to the fact that you are completely alone.

A message on a truck proclaimed “Ramaphosa must go back to Venda”.

Veness said to this day, no politician had heeded her plea to “stand” with her, and denounce the violence to help build trust, especially in light of the fact that there was no police presence during the violence.

She said intelligence from some businesses, members of the chamber and from shop floors was that some politicians agreed with what was happening.

“The owner of one business which was destroyed said he was told by a councillor that he mustn’t worry, he would make sure he got a good contract from the city and he would be rich beyond his wildest dreams,” she said.

She said police officers had told her that they had been instructed to stand down, and say that there was no teargas, which was not true.

There was now a trust deficit and many businesses which were affected by the violence were considering other options, which would worsen unemployment.

She knew of one small township entrepreneur who was now running his business from “under a tree”. She said many smaller businesses did not have insurance. An added problem was that essential documents and title deeds were destroyed in the fires.

“I think the fundamental belief is that when someone attacks your business and home, there will be an adequate response from the government ... There was no response. It was horrible awakening to the fact that you are completely alone.

“I don’t know what to say to people who have been paid out [by insurance], who are sitting with cash — that they should put it back? Is that a sound business decision to make?”

The aunt of slain 17-year-old Sibahle Nguse has called for justice after he was shot dead during the civil unrest which gripped parts of ...
News
2 months ago

Palesa Phili, CEO  of the Durban Chamber of Commerce and Industry, also testified at the hearing on Thursday, agreeing that the SAPS were nowhere to be seen when the rioting was happening.

She said when she contacted the KwaZulu-Natal police commissioner on Saturday July 10, after the N3 was blocked and trucks were being burnt, he had told her “the situation is out of control. The only way it can be controlled is to have the province declared a state of emergency.”

She said his phone, and that of his generals, were switched off from Sunday.

The commissioner's phone “didn’t even ring”.

How do you mobilise so many people to be in one place at one time? It was a well co-ordinated attack.

On Monday evening, both she and Veness called police minister Bheki Cele “to make him aware that the situation was getting out of hand” and to “really plead” that the SANDF be deployed to the province.

“He said the SANDF was on its way ... We waited and waited for about two or three days.”

Phili agreed that the events of those days were an “insurrection” in the eyes of the business community.

“How do you mobilise so many people to be in one place at one time? It was a well co-ordinated attack.”

She said it was painful to see the suffering.

“For example, the practice of a dentist, a Dr Ngubane, was targeted. They took his sinks and equipment. Informal hair salons were targeted, their sinks and hair dryers were taken. What were the looters going to do with these things?”

The commission — chaired by Andre Gaum, with commissioners Chris Nissen and Philile Ntuli — is expected on Friday to do on-site inspections of areas in KZN where people were attacked, allegedly as a result of racial profiling, at community roadblocks.

The SAHRC hearing into the July unrest in Phoenix in KwaZulu-Natal continued on Wednesday.
News
2 months ago

LISTEN | What happened in Phoenix are killings, not a massacre, SAHRC hears

Phoenix Ubuntu Forum’s Sham Maharaj said what happened in Phoenix during the July unrest were killings, not a massacre.
News
2 months ago