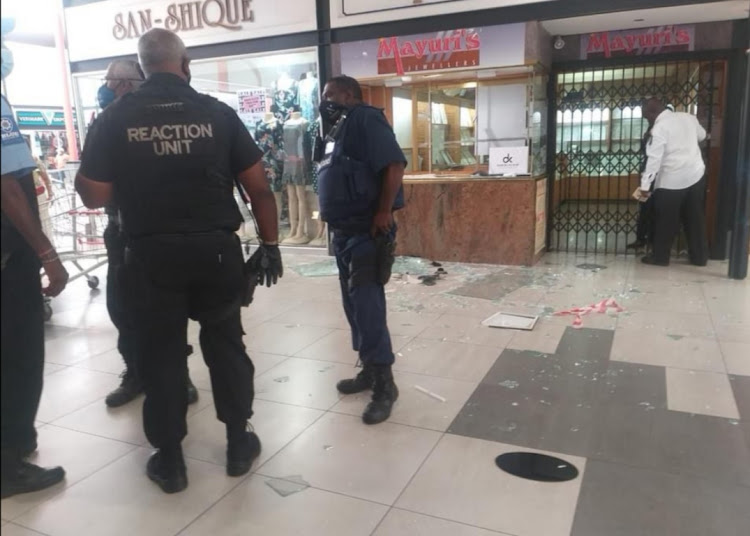 Two jewellery stores were robbed by armed men and then looted by bystanders at the Phoenix Plaza in Durban on Monday.
Image: Reaction Unit SA

Two men allegedly linked to the robbery of two jewellery stores at a Phoenix mall on Monday have been nabbed by the police.

Police spokesperson Brig Jay Naicker said the duo were arrested in KwaMashu in a joint operation with private security companies.

The men were part of an armed gang who stormed Sterns and Mayuri's at the Phoenix Plaza, north of Durban. A shoot-out ensued with police on the Phoenix highway before they made their escape.

After the robberies, community members looted the two stores and threatened traumatised staff.

Provincial commissioner Lt-Gen Nhlanhla Mkhwanazi condemned the incidents, saying at the time, “we will spare no effort in ensuring that those bystanders who made themselves criminals by robbing both stores themselves, are also investigated fully for their actions.

A security guard and a customer were shot and injured during an armed robbery at a jewellery store in the Menlyn Park Shopping Centre in Pretoria on ...
News
2 months ago

“Communities are again warned that they become criminals when they help themselves to property at crime scenes.”

Naicker said on Thursday that during a search “various items of jewellery, two firearms, 10 rounds of ammunition and a speed point machine were found in the suspects' possession.

“In a follow-up operation, two vehicles believed to have been used during the robberies were seized by police.”

He said the men, aged 21 and 26, have been charged with two counts of robbery, as well as unlawful possession of firearms and ammunition charges. They are expected to appear in court soon.

“Investigations are ongoing and more arrests can be expected,” said Naicker.

Accounts of racial tension, assaults and killings of Africans, allegedly at the hands of Indian people in Phoenix, were aired during day 2 of the ...
News
2 months ago

Two arrested after jewellery store owner gunned down in Centurion

Two suspects have been arrested in connection with a robbery at a jewellery store at Centurion Mall in which the owner was killed, Gauteng police ...
News
3 months ago

The security officer who was shot on Wednesday after a robbery at a jewellery store at the Gateway mall in Umhlanga, north of Durban, has died.
News
3 months ago