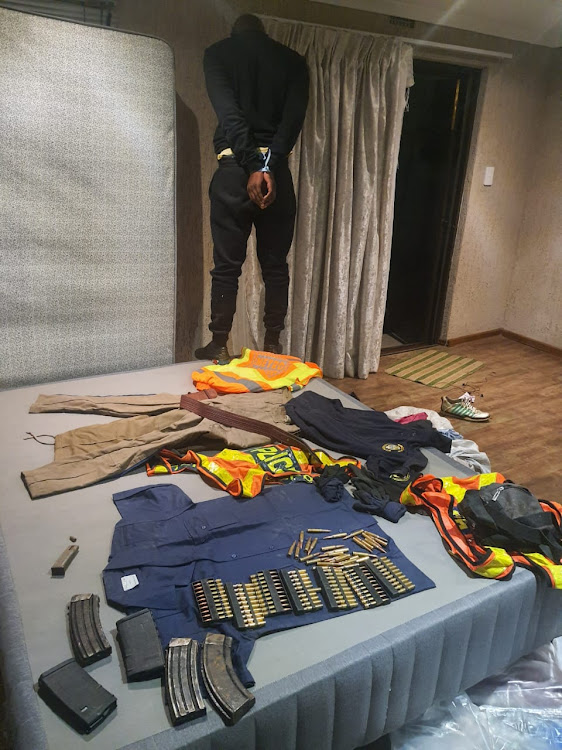 Items seized during a police raid on Wednesday.
Image: SAPS

A man released on bail after being charged with impersonating a police officer and attempted truck hijacking was arrested again on Wednesday for being in possession of a signal jammer, SAPS and metro police uniforms.

The bust was the latest in a crackdown against "blue-light robbers" and people using police uniforms to commit robberies in Gauteng.

More than 50 people have been arrested in the province since March 2021 on charges including impersonating a police officer, possession of police uniforms and equipment, possession of unlicensed firearms and ammunition, and hijacking vehicles and trucks.

Johannesburg North crime intelligence sent information to highway patrol members on Wednesday about a suspect in possession of a police uniform and allegedly involved in truck hijackings in Gauteng.

Upon preliminary profiling of the suspect, it was discovered that he was on bail after being charged with impersonating a police officer, attempted truck hijacking, and possession of unlicensed firearms and ammunition.

“We have declared to the inhabitants of Gauteng during the launch of safer festive season operations that, together with our partners, we will tighten the operating space for criminals,” he said.

“Trio crimes, including hijackings, are violent in nature and we have to reduce them drastically. We are starting to see successes due to more vehicles on our highways, thanks to the Gauteng government’s recent donation of high-performance vehicles.”

While many found it hilarious, others said it made light of crime, and the city should focus more on policing and citizen safety than making memes.
News
6 months ago

'A lot less is needed to orchestrate a kidnapping - as long as you have a telephone and get your homework done, you can snatch a victim and name your ...
News
6 months ago

A syndicate is behind the spate of central Joburg kidnappings, say locals

And it doesn’t help that police are understaffed and often don’t have access to vehicles, says CPF head
News
6 months ago