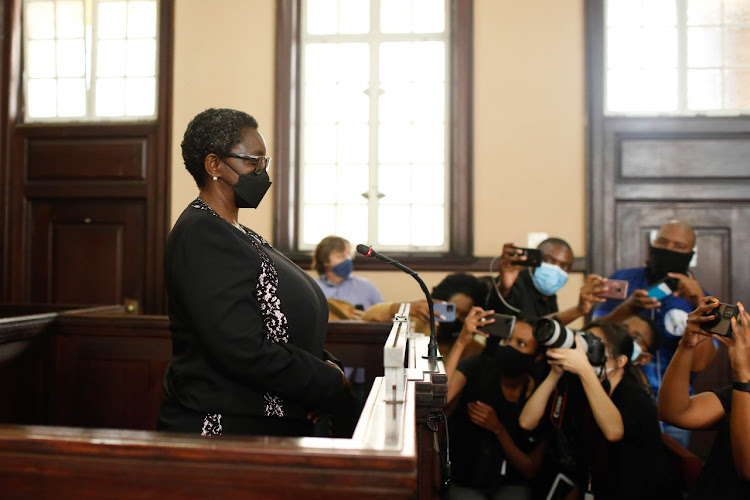 “If I gave false evidence, I did so unknowingly,” said former social development minister Bathabile Dlamini when she appeared in court accused of lying under oath.

Dlamini on Wednesday pleaded not guilty in the Johannesburg magistrate’s court to a charge of perjury. The matter was rolled over to Thursday after the National Prosecuting Authority (NPA) failed to consult its first witness.

Prosecutor Jacob Serope requested that the state be given more time to consult Zodwa Mvulane, who had already been subpoenaed and arrived in court but could not make it to a prior consultation after numerous attempts had been made to contact her.

A second witness, identified as Thokozani Magwaza, was subpoenaed but could not be reached before the trial. The state asked for more time to make travel arrangements for Magwaza.

“It would be unfair to put a witness [on the stand] without having a consultation.

“It is the first time that we request the indulgence of this court. We have not done so previously and we believe it will be in the interest of justice to have this witness in court and testify,” said Serope.

Clad in a black suit, the former social development minister was accompanied by a handful of supporters wearing ANC regalia.
News
6 months ago

It also emerged that the state had failed to furnish the defence with a list of witnesses it intended to call ahead of the trial. Dlamini’s lawyer, Tshepo Mphahlane, described this as “unacceptable”.

“We came here ready for trial. We are obviously opposed to the application for a remand. The prosecution has not set out good grounds for a remand — the reasons advanced are purely administrative,” said Mphahlane.

“We know we are dealing with the state. They are used to getting their way.”

The NPA, however, insisted that it could not have foreseen the turn of events.

Magistrate Betty Khumalo said she was inclined to indulge the request. “I don’t think the request is too unreasonable, this could have not been something they anticipated.”

Dlamini, who is president of the ANC Women’s League, allegedly gave false evidence under oath at an inquiry instituted by the Constitutional Court in 2018 into the payments fiasco at the SA Social Security Agency (Sassa). The matter relates to repeated extensions of an unlawful tender awarded to Cash Paymaster Services (CPS) to distribute the department’s social grants in 2017.

ANC president Cyril Ramaphosa says his party will go back to the drawing board ahead of the next elections, but TimesLIVE readers are not convinced ...
Politics
6 months ago

The court was forced to extend the contract with CPS even though it was found to be illegal.

The inquiry, chaired by judge Bernard Ngoepe, found Dlamini concealed the extent of her involvement in the debacle and she was ordered to pay personal costs of about R650,000,  which she settled in May.

The apex court ordered Ngoepe’s report to be forwarded to the national director of public prosecutions to consider whether Dlamini had lied under oath and should be prosecuted for perjury.

Clad in a black suit, Dlamini was accompanied to court on Wednesday by a handful of supporters wearing ANC regalia. Among them was suspended ANC member Carl Niehaus and NEC member Sonto Thipe.

Reacting to the NPA's inability to consult with witnesses, Dlamini's supporters chanted that the state had no case against her.

During the last court appearance, Phahlane accused the state of targeting her client because she was a politician.

TOM EATON | You know what they say, set a crook to catch a crook

In its search for mayoral candidates, the ANC seems to be applying this well-worn adage
Opinion & Analysis
7 months ago

If there is one thing former minister of social development Bathabile Dlamini can't seem to shake off it's controversy.
Politics
2 years ago