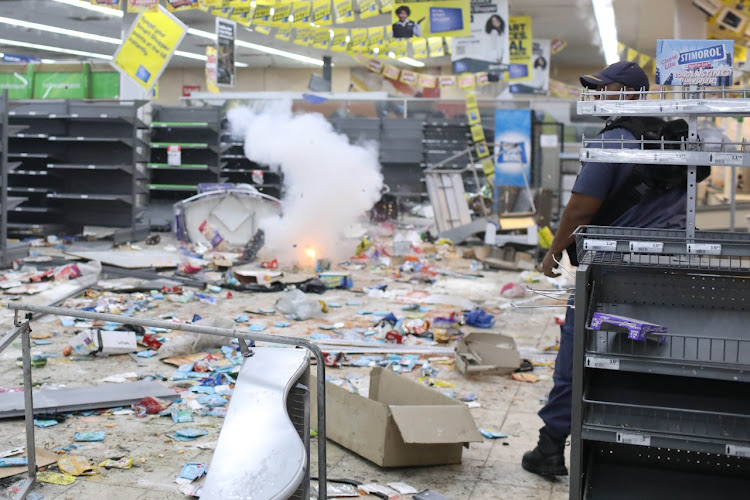 Police clear a shopping centre with stun grenades in Alexandra, Johannesburg, during the looting in July. The SA Human Rights Commission is holding investigative hearings into the cause of the unrest
Image: Alaister Russell/The Sunday Times

Four specialist state advocates were working with the Hawks, crime intelligence, digital forensic investigators and others to “get to the bottom” of who was behind the July unrest.

This was the evidence before the SA Human Rights Commission on Thursday of advocate Kwena Mashamaite, deputy director of public prosecutions in KwaZulu-Natal who heads the National Prosecuting Authority’s organised crime unit.

The commission is probing the weeklong violence, which resulted in widespread looting and about 300 deaths, some allegedly as a result of racial targeting at community roadblocks.

Mashamaite refused to be drawn on what investigations had produced thus far and if any charges of treason or sedition were in the offing. He wouldn't say if any “high profile” people were under investigation.

“Things will unfold. If there is evidence it will be produced in court,” he said.

His unit, he said, was specifically looking at the instigators of the violence and those who incited others, whether they were financed or if they had a particular mandate.

So far three such cases were  before the courts. Two had been adjourned for further investigation and one had been set down for trial in February.

Mashamaite's advocates were also dealing with four other dockets and further investigations were being done to ascertain whether to proceed with prosecutions.

He said investigations into the instigators were “tense and complex”.

His colleague, advocate Noxy Dube, said her “general” unit was handling other serious matters and presently there were six murder cases on the roll involving multiple accused and multiple crimes in the Verulam and Phoenix areas.

Bar one, bail applications had been finalised and in one matter an indictment for transfer to the high court for trial had been prepared.

Dube said three experienced advocates were dealing with the matters, even though they were still in the lower courts.

“We have been in Verulam almost daily ... directing investigations and dealing with adjournments and bail applications.”

Asked about the apparent discrepancy between the number of murders, attempted murders and other serious crimes allegedly committed during the unrest, and the number of murder cases presently before the court, Dube said the police “don’t bring dead dockets”.

“They bring dockets only when there is something to start from ... where there is evidence.”

She said her team was presently directing police investigations regarding two other dockets.

One has been finalised with a guilty plea. Each matter also had more than one accused — with up to eight in some.

Once investigations were completed, they would be set down for trial in either the district or regional courts, depending on the charges.

Melis added that in 2,219 cases of looting, all but 64 were prosecuted.

The hearing which has been sitting in Durban since last Monday continues on Friday.

The SA Human Rights Commission's hearings into events that led up to the July riots and looting are continuing on Tuesday.
News
5 months ago

Two water cannons were used to disperse crowds that ran riot in Gauteng during the July unrest, the SA Human Rights Commission heard on Monday.
News
5 months ago