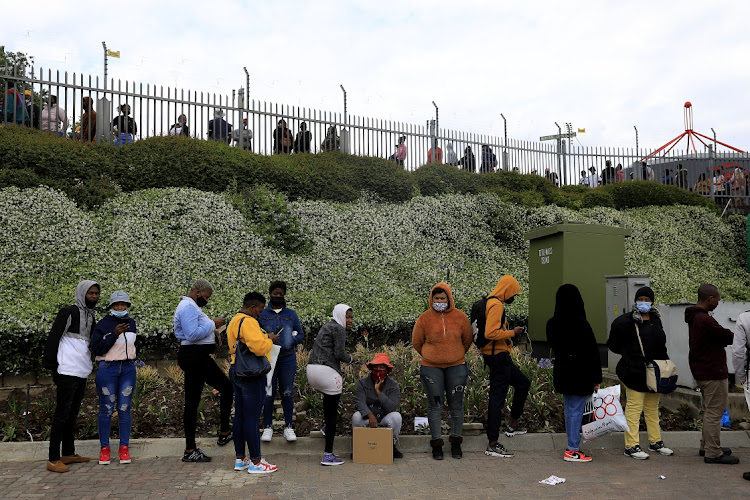 It was a busy Black Friday at the Woodmead Value Mart in Woodmead, Johannesburg, on November 26 2021.
Image: Alon Skuy

Fears over the spread of a new variant of the coronavirus as well as cold and rainy weather were not enough to keep shoppers away from various Gauteng malls on Black Friday.

Though shopping at some centres got off to a slow start on Friday morning, at other malls long queues formed as people waited patiently to take advantage of the opportunity to stock up on essentials or do their festive season shopping.

Street vendors in Joburg struggle to compete with shopping centres

Street vendors in Johannesburg struggled to make sales as they competed with shopping centres on Black Friday deals.

With hundreds of people coming in and out of the Golden Walk Shopping Centre in Ekurhuleni, street vendors were trying their best to sell their items, but they could not compete with the big companies.

Joseph Gugeni, a street vendor who sells fruit and vegetables outside the centre, said: “I want people to come buy from me, but they are all inside there, shopping. It is too quiet today.”

Britain's retailers are hoping Black Friday discount day will get shoppers spending, though it takes place against a backdrop of shortages of both products and drivers to deliver them.

On the eve of Black Friday, UK retailers reported on Thursday the strongest pre-Christmas demand since 2015 but also the biggest price rises since 1990, as fears of shortages led shoppers to buy gifts early, figures from the Confederation of British Industry showed.

Some bargain hunters braved the gloomy weather and rain to take advantage of Black Friday specials in Durban.

Shoppers flock to Mall of Africa in Midrand 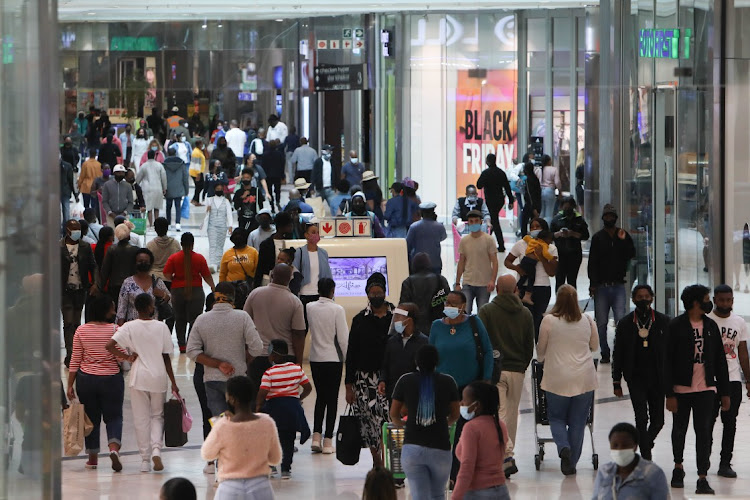 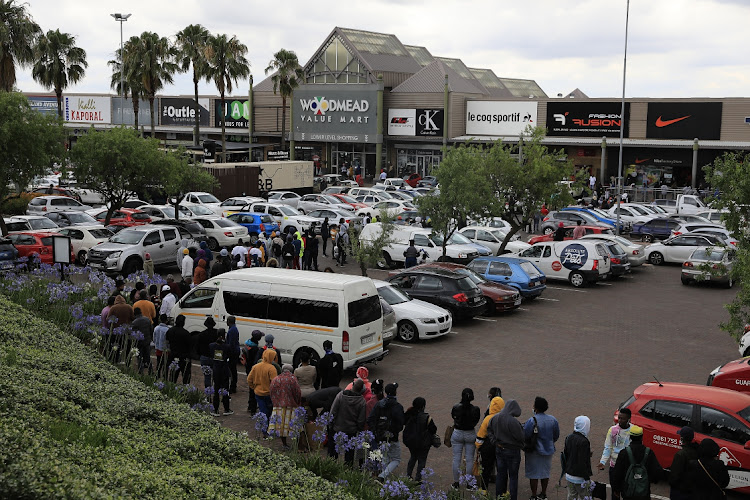 A long queue to get into the premises of Woodmead Value Mart in Gauteng pic.twitter.com/mqi4ANK4jo 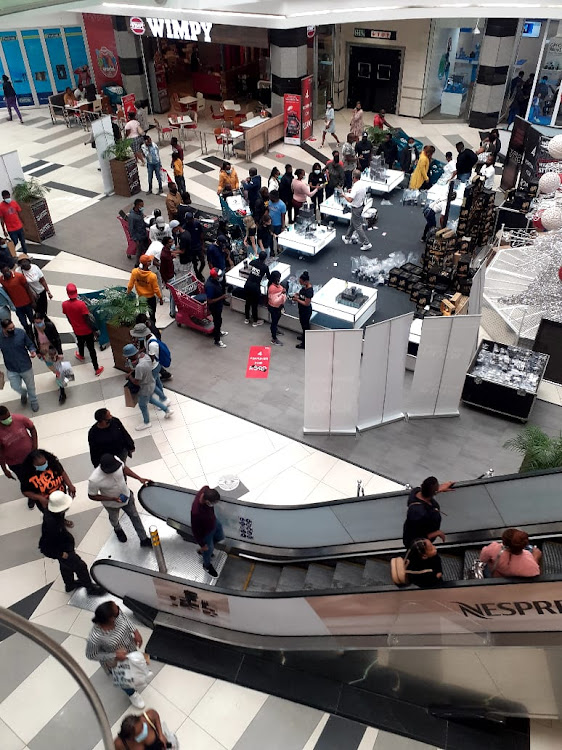 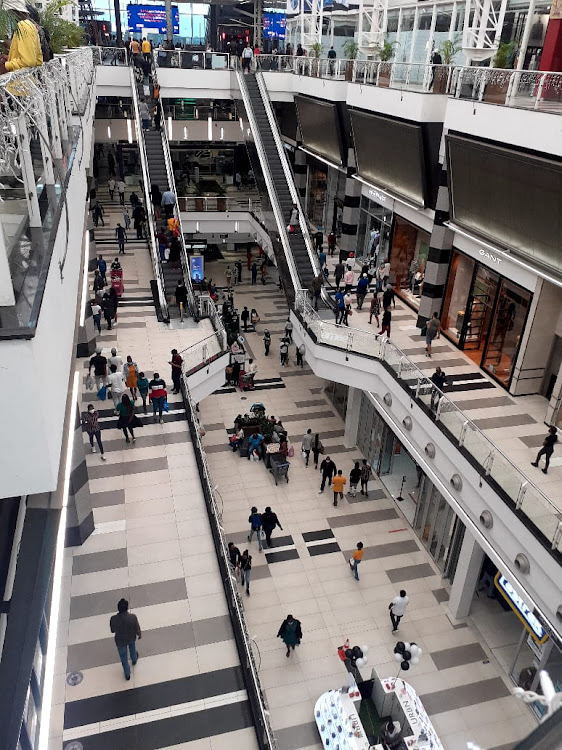 Unhappy shoppers flocked to social media on Friday to complain that discounts offered were “not actually” discounts.

Some said they were not impressed with the less than 50% discounts offered by many shops and prices were not reduced as much as expected. Other users said Black Friday should be done away with. Here is a snapshot of what shoppers had to say:

A quiet start at shopping centres in Rosebank, Johannesburg

IN PICS | Quiet start to Black Friday at Joburg malls

Get a Sunday Times subscription at up to 70% off

BLACK FRIDAY | This Black Friday, get a Sunday Times subscription at up to 70% off and enjoy SA’s favourite Sunday read digitally or in print: https://t.co/7a8caIGghv pic.twitter.com/I1lQ2n97q9

There are no long queues at Bloed Street Mall in Pretoria. Shoppers move from one clothing stores to the other looking for Black Friday deals. — Shonisani Tshikalange 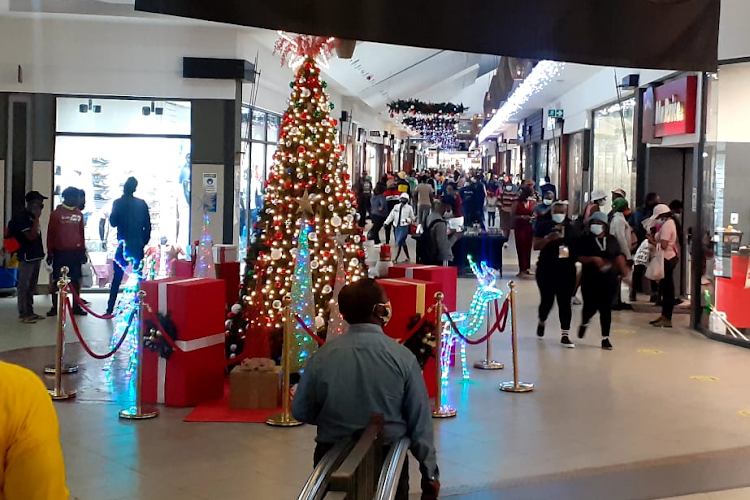 Climate activists targeted 13 Amazon depots across the UK on Black Friday as part of a protest against the e-commerce giant, which the Extinction Rebellion group said epitomised obsessive overconsumption.

"Black Friday epitomises an obsession with overconsumption that is not consistent with a liveable planet. Amazon and companies like it have capitalised on our desire for convenience and stoked rampant consumerism at the expense of the natural world," the group said.

Extinction Rebellion said blockades were also being held at Amazon depots in cities including Manchester, Newcastle and Bristol, as well as at depots in Germany and the Netherlands.

Amazon, which brought the Black Friday discount day to the UK in 2010, had no immediate comment. — Reuters 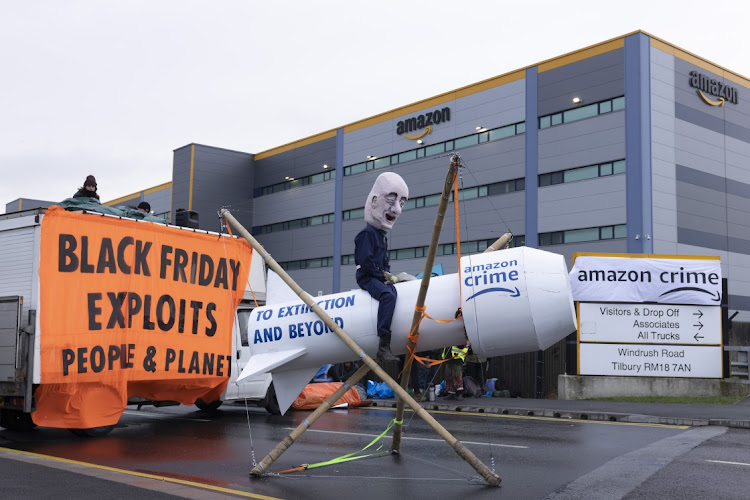 'We are scared we might go into lockdown, so we are shopping'

Kgomotso Lebese, who is with her mother, said they have a budget for their shopping and are planning to stick to it.

The 30-year-old was hoping there would be great deals like last year. "I missed last year's special and I heard it was good," she said.

She raised concerns of Covid-19 infections, however. "So far there is no social distancing but we are wearing masks and we are sanitising. We are scared we might go into lockdown, so we are shopping so that when they close we will be finished." — Shonisani Tshikalange

In the Pretoria CBD shoppers queue outside a shoe store. Some say they are hoping to get good deals on children's shoes. 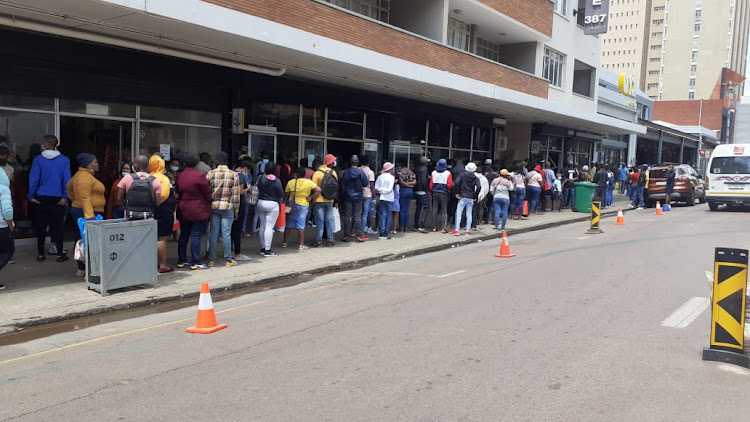 Tsumbedzo Ravele said it is his first time shopping on a Black Friday.

"We are expecting good deals for kids. We are shopping for shoes for kids. I am willing to spend about R7,000 at different shops for my kids. It's my first time buying on Black Friday. I want to compare if the deals are good," he said.

Ravele, who lives in Atteridgeville, arrived in the Pretoria CBD at about 9am.

"I do have fears [about Covid-19] because there might be people who are infected. My fear is using my money before I buy for my kids. I want to spend on them before I spend on my things," he said. — Shonisani Tshikalange

Queues in Gqeberha this morning

Golden Walk Centre Management has confirmed that Golden Walk shopping centre in Germiston, Ekurhuleni, will be open to the public following a flooding incident on Thursday.

“The Golden Walk mall can confirm unexpected flooding of its premises following torrential rains over the past 24 hours. Our teams have been on site since last night to pump the water out and since this morning have been assisting tenants with the clean-up so normal operations can resume,” it said.

“The mall will be open to the public for Black Friday sales though we do expect some tenants to open only later during the day.” — Shonisani Tshikalange

'It's a win compared to the normal price'

Johannah Maimela says she is excited about the Black Friday bargains.

"I am here for a special, I saw it on TV. It's a win compared to the normal price. I got here around 8am and I was not expecting to find thing long queue. I am not sure if I will get what I want, I might find everything finished," she said at Nkomo Village in Atteridgeville, Pretoria.

She said she also has fears of the country going to lock down: "I do have fears about Covid but I am satisfied that everyone is wearing a mask."

She was only visiting one shop to do her Christmas shopping, she added. — Shonisani Tshikalange 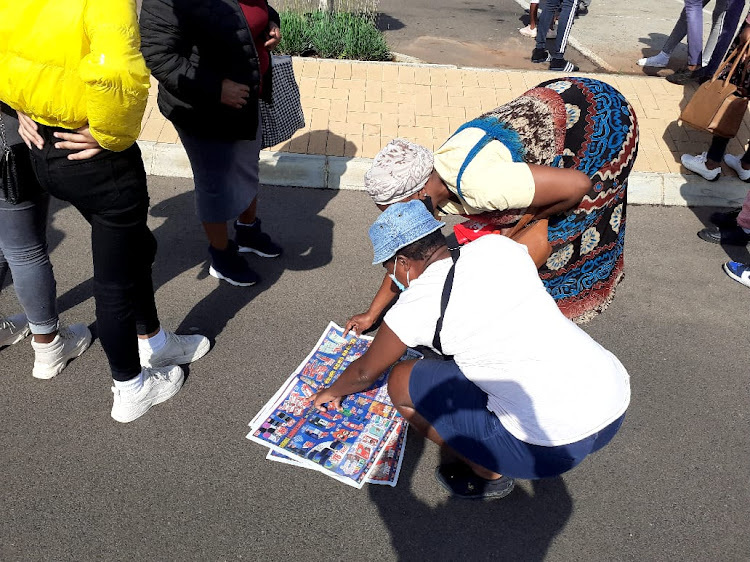 Johannah Maimela looks at Black Friday deals as she waits for her turn at Nkomo Village in Atteridgville.
Image: Shonisani Tshikalange

The manager of a store at Nkomo Village in Atteridgeville, Pretoria, which has drawn a lot of customers, says he is very happy with the day so far.

Lenton Moodley, area manager at Boxer, said they opened at 6am, while staff came in at 5am for preparations.

"It was very hard to manage the expectations. However, we tried to the best of our abilities. We cannot service every single person unfortunately — it's on a 'first come, first served' basis. We did have sufficient stock but demands are very high."

He said everything has started off smoothly. "I saw the line, it's better to have everyone queuing outside for social distancing than having chaos." — Shonisani Tshikalange

There is already a long queue that goes out to the malls parking lots as shoppers wait for their turn to shop at Nkomo Village in Atteridgville. Shoppers have lined up, wearing masks and most carrying trolleys. 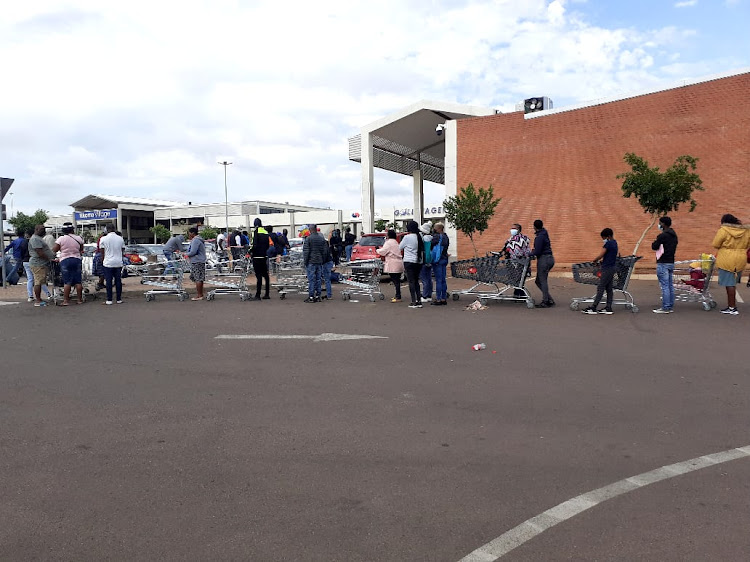 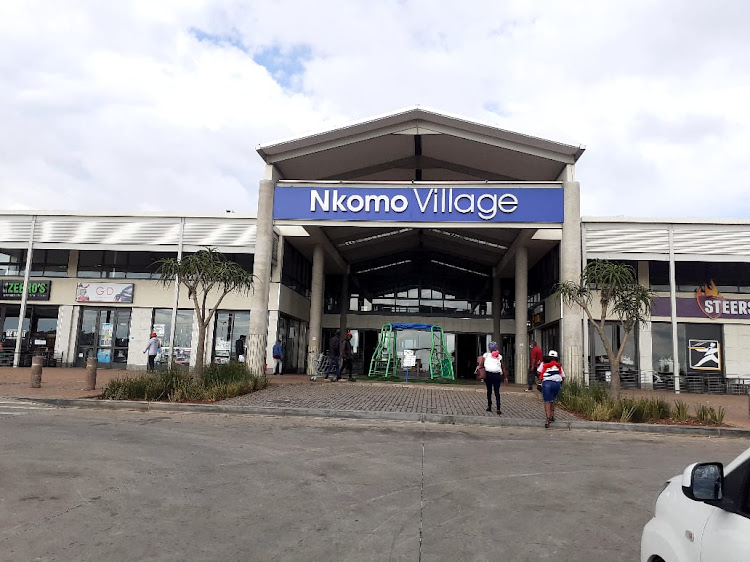 Evelyn Tabane, who regretted not waking up early after seeing the snaking queue, said she was excited about the special deals she saw at one of the stores. She, however, expressed concern about Covid-19 infections.

"During this time of Covid-19, we don't know if we will be able to survive because there are many of us out here. I am willing to wait for my turn because this is a big special, I am hoping that I will get everything that I want."

She said she wanted to buy cleaning products, considering there might be another lockdown. "The cases are increasing now," she said. — Shonisani Tshikalange

There is already a long snaking queue as  shopper wait for their turn to shop #BlackFridayDeals at one of the groecery store in Nkomo village in Atteridgville.@TimesLIVE pic.twitter.com/yzAGmAjUNZ

EDITORIAL | Caution: don’t spend more than you save on Black Friday

Police on standby to deal with possible unrest in KZN, parliament hears

The police are on standby to deal with possible unrest in KwaZulu-Natal this weekend, while they have asked the public to ignore social media posts ...
News
1 week ago

Is it really a Black Friday special? We used this online tool to find out

Online retailer Takealot is among those retailers who are going big on the annual shopping holiday and have already released some of their specials.
News
1 week ago