Will there be other tea parties at Nkandla? Duduzile Zuma-Sambudla hints they could happen 'soon' 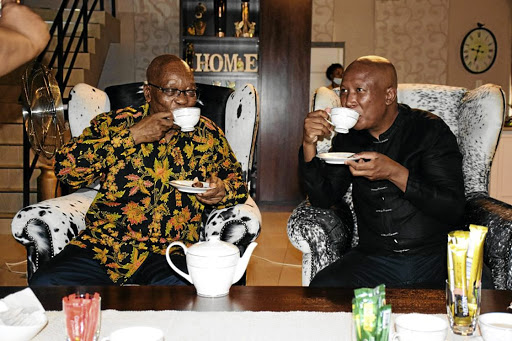 Duduzile Zuma-Sambudla has hinted at the possibility that her father Jacob Zuma might  host more tea parties at his Nkandla homestead.

According to reports, Zuma is “fine” and back at home after a routine visit to a Johannesburg hospital last week.

However, she did not reveal who her father might be sipping the hot beverage with.

“Dad, I have a feeling we will be hosting more Nkandla tea very soon ...” she said..

Dad, I Have A Feeling We Will Be Hosting More #NkandlaTea Very Soon… pic.twitter.com/yJeOgQk0NX

Before he was jailed in July, Zuma hosted a list of politicians at his homestead, including former SABC COO and African Content Movement (ACM) leader Hlaudi Motsoeneng and Black First Land First (BLF) leader Andile Mngxitama.

Malema recently defended his decision to visit Nkandla, saying he was there to tell Zuma to appear before the commission of inquiry into state capture.

“Others are saying we lost elections because Malema went to drink tea with Zuma. What if that tea is the one that moved us from five to three in KZN in eThekwini?” asked Malema.

“If that tea was hitting us it was supposed to hit us there first. No it didn’t, I don’t know how they are looking at this maths. From five to three — ‘Malema you cost us votes’ — from eight councillors to 24 councillors in eThekwini after the tea.”

“I didn’t go there to beg Zuma for anything, I went there to tell Zuma to go to the commission. Now you’re fighting with me to tell a person to do the right thing, you say we can’t vote for you because you went to drink tea, but I didn’t just drink tea, I was telling this old man that you’re going to be arrested if you don’t go to the commission. Did he not get arrested? He didn’t listen. Had he listened to me, he would not have gone to jail.”

Malema said if the tea date cost the EFF votes he was prepared to take any form of punishment, including being removed from his leadership position.

“I will never stop telling people to do the right thing. If that is going to cost us votes so be it. I’m prepared to go home at my grandmother’s house because there’s no one there. Go live there and let you be with your EFF that you want to lead with lies, saying we should not go around telling people the truth that they must go to the commission.

“You’re saying that is wrong when we ask a person to comply with the law of SA. We will never stop telling the truth. It doesn’t matter how much it will cost us, but the truth will remain the truth and one day it will pay off. They will thank us that these are the people who liberated us,” he said.

Why I went to Nkandla: Julius Malema explains his tea party with Zuma

'Call me a flip-flopper but my politics have not changed," is how EFF leader Julius Malema responds to accusations that he changes his mind depending ...
News
4 months ago