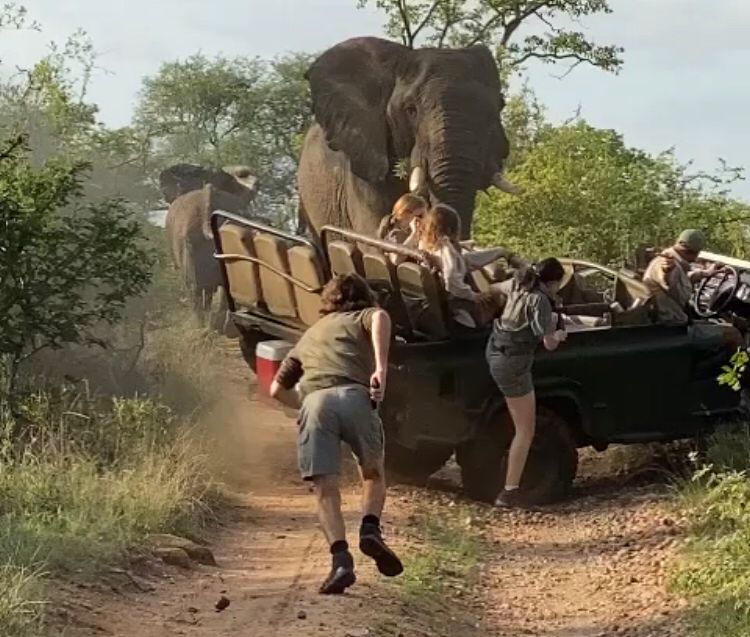 A bull elephant charges a game vehicle at the Selati Game Reserve on Sunday. None of the occupants were harmed in the incident.
Image: Screengrab

It was a narrow escape for wildlife guide students on Sunday when a bull elephant in musth charged their game vehicle.

The occupants of the vehicle scurried for cover, and no injuries were reported.

In a statement on Monday evening, wildlife guide training company EcoTraining confirmed the incident, which took place at the Selati Game Reserve.

“On a routine activity, the EcoTraining instructor and trainees came across a breeding herd of elephants. The vehicle stopped to observe the elephants and give them a chance to settle down.

He said that once the vehicle had come to a standstill, the trainees were moved to a second vehicle stopped nearby. The two instructors who were with the group had 25 years experience in the field.

Video of the incident was recorded by someone in the second vehicle, and has been circulating widely on social media. EcoTraining said it wasn't known who had recorded the video, but confirmed its authenticity.

Selati Game Reserve general manager Bryan Havemann, who went to the scene after the incident, said: “Though the vehicle was damaged, thankfully none of the people on the vehicle were injured.”

All those involved in the incident received counselling.

Teachers at a daycare centre in Boksburg were shocked last week when, during outside playtime, they looked up and saw a white tiger watching them.
News
3 months ago