‘Get out of an abusive relationship’: detective advises survivors of GBV 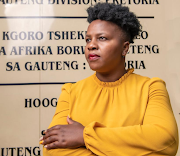 A warrant officer with 26 years’ experience in solving gender-based violence cases, has advised survivors and those exposed to abuse to leave the relationship and seek help immediately.

This is as the country observes the 16 Days of Activism for No Violence Against Women & Children Campaign.

“The first time you may be lucky and land in hospital, but the second time can be the last time as most cases turn fatal. My advice is to get out of the relationship when there is still time. The abuse will never end and he or she will never change. Abusers use a reward system, they are psychological masterminds. They abuse and reward you with promises and gifts. The beatings never end, they end when there is a tragedy”, said Warrant Officer Bez Bezuidenhout.

Bezuidenhout has been instrumental in the handing down of at least 20 life imprisonment sentences and an additional 2,000 years of which 115 years were handed down between August and October to perpetrators of GBV-related crimes.

In March, Bezuidenhout successfully ensured that a notorious serial rapist with a strong gang affiliation who was found to have been terrorising his victims around Bloemfontein and surrounding areas since 2014, was sentenced to 35 years of direct imprisonment. After this conviction, he was also able to link the same perpetrator to a cold case of murder that took place in 2013.

The father of two, born and bred in Bloemfontein, joined the SAPS in 1993. In 1995, he was transferred to the then Child Protection Unit as an investigating officer.

This specialist detective remains a beacon of hope for many survivors of GBV who include women, children and people of vulnerable groups.

There are 176 Family Violence, Child Protection and Sexual Offences Investigations units nationwide and at least one SECI unit per province.

Sergeant Refilwe Tladi is another of the dedicated officers helping GBV victims.

Born and bred in Atteridgeville in Pretoria, the 44-year-old mother of four has 19 years’ service, having joined the SAPS in 2002.

This specialist detective recently made headlines after she successfully ensured that a notorious serial rapist who had been terrorising women, children and vulnerable groups in Tshwane was sentenced to five life sentences and an additional 1,088 years in prison by the North Gauteng High Court.

A rape survivor herself, Tladi says she joined the SECI unit in 2016 to assist victims of GBV-related crimes.

She has been instrumental in the handing down of at least ten life imprisonment sentences and an additional 1,233 years to those behind violence against women, children and vulnerable groups.

Tladi advises GBV survivors not to lose hope in the criminal justice system.

“The journey to a conviction and ultimately bringing closure to victims of GBV is at times long and tedious, but I urge all people in SA to trust the process and know that the SAPS and other government departments are doing all they can to rid our streets of these callous criminals and abusers. Always remember members of the SAPS are always ready to serve and protect all people living in SA but the community must also assist us in our work”, said Tladi.