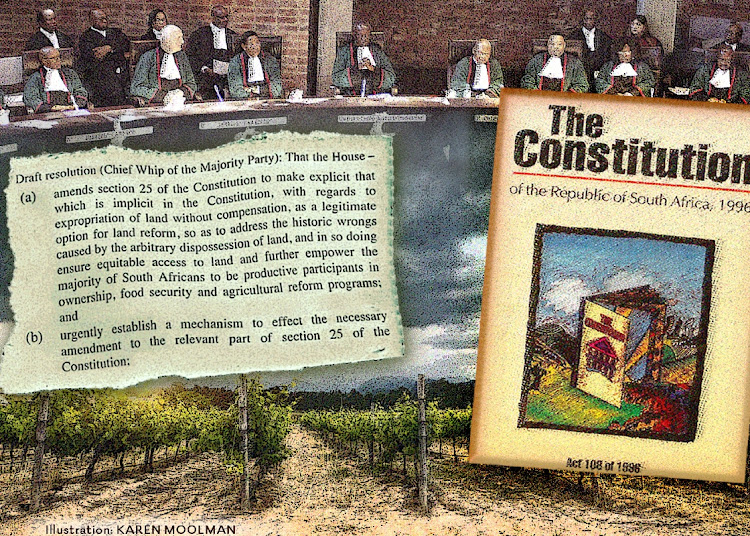 The debate about the amendment of section 25 of the constitution is continuing.
Image: Karen Moolman

After four years of national torment the proposed amendment to speed up expropriation of land – and probably the entire concept of land reform – will come before the National Assembly on December 7. The ANC needs a two-thirds majority to get the amendment into the statute book, but there’s not a snowball’s hope in hell of that happening.

If the EFF continues its recalcitrant behaviour after the local elections and opposes everything ANC, there is no likelihood of the constitution being amended – at least not now. This is no indication of what might happen in future though. The can has simply been kicked down the road and next year’s ANC leadership elections will resurrect this age-old moral question like Lazarus of old.

I asked North West University’s professor Elmien du Plessis, who has been following developments since 2017, about the rather unedifying process and its consequences.

You have always maintained that it’s not necessary to amend the constitution to achieve land reform. Is that still your view?

Which amendments will be debated in the National Assembly?

The Constitution 18th Amendment Bill, to amend section 25 of the constitution to make that which is implicit, explicit. The bill says that under certain circumstances when land is expropriated, compensation may be zero. It also makes provision for some land to be placed under custodianship of the state.

Is the newly revised section merely an explicit version of the original section 25?

Probably not. The addition of “custodianship” is not implicit. The ANC tried arguing in the ad hoc committee that it is implicit – also if one considers the Ingonyama type cases, but it is not convincing. There have been many questions on whether the committee exceeded its mandate.

The EFF will vote against the amendment to section 25. What are the differences between the ANC and the EFF’s proposed amendment?

The EFF wants all land to be under custodianship of the state. The ANC’s policy since 1994 has been that there can be a combination of state-owned, private and communal land. The other major difference is that the EFF wants the amendment to refer to “without compensation” while the ANC talks about “nil compensation”.

“Without compensation” removes the state’s duty to pay compensation when land is expropriated. Nil compensation (preceded by “may” and not “must”) means the state will still have to justify expropriation after weighing up interests and diverse factors. The compensation may, however, end up at nil rand.

$EXTACY | In a financial emergency, Linza de Jager decided to become a call girl, but reality got in the way.

FREE TO READ — ONE HELLUVA BATTLE | F1 hasn't been this exciting in ages. And in Holland, Max Verstappen is EVERYTHING.

A HAPPY ENDING | Tinus Horn discovers probably SA's best boxer ever that almost nobody has ever heard of.

SURELY NOT? | When he announced he wanted to get divorced, his wife's psychological beasts awakened and were out for revenge.

News, analysis and interviews in this week's Vrye Weekblad.
News
9 months ago

Politics is about power, plus five talking points from ‘Vrye Weekblad’