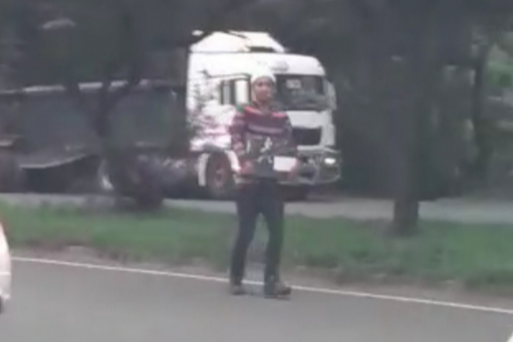 A man appears to make off with 'loot' from a truck that spilled its cargo in Durban on Friday.
Image: Supplied

A looting scene played out on a busy Durban road on Friday morning when a truck carrying alcohol lost its load.

In a video circulating on social media, people could be seen making off with alcohol in between morning traffic in the Edwin Swales area.

Metro police commander Steve Middleton said it was not an orchestrated incident.

“We received a report around 6am in the vicinity of Edwin Swales,” he said.

WATCH: Locals loot crates of beer from a truck that lost its cargo in Edwin Swales, Durban this morning
Video:SUPPLIED@TimesLIVE pic.twitter.com/6YRS6NHMsH

“Apparently a SA Breweries truck lost its load and the community looted the truck. I have given feedback to the Durban Chamber of Commerce.

“The unfortunate part, and it appears to be rife, is that whenever a truck loses its load these days, whether its food or drink, localised looting takes place. It is not an orchestrated incident.”

Middleton said the road had been cleared.

The failure by the government to provide feedback on November 3 to small truck operators regarding the employment of foreign drivers in SA resulted ...
News
5 months ago

Barnsley Road in Pietermaritzburg resembled a “war zone”, with dead bodies lying twisted on the ground on the adjacent river bank and all but one ...
News
6 months ago