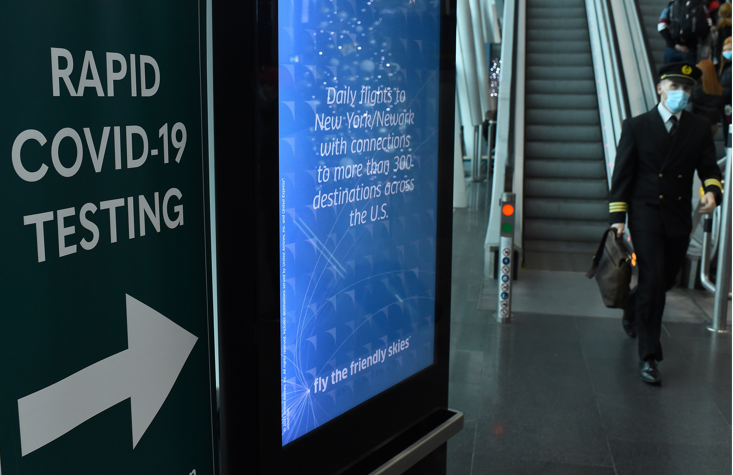 A pilot walks past a sign for Covid-19 testing at Dublin Airport, as the spread of the coronavirus disease continues in Dublin, Ireland, on December 3 2021.
Image: REUTERS/Clodagh Kilcoyne

This as another fatality was reported by the health department on Sunday, bringing the cumulative total to 89,966 since the pandemic reached SA in March last year.

The court found the former director of the state hospital in Salt, a city west of the capital Amman, and four of his senior aides responsible for the deaths, the media said. The patients, who were being treated in the hospital, died in March when staff failed to act after oxygen ran out in a Covid-19 ward for nearly an hour.

The disaster, which politicians and local activists said exposed gross negligence in the state health system during a spike in Covid-19 infections, sparked anti-government protests across many cities and provincial towns.

Imagine the feast one person could have if they spent more than R4,800 on three meals for a day.

Eswatini-born English actor Richard E Grant was appalled when he paid the equivalent — £228 — for a tuna and cucumber sandwich, two bangers and a tomato-onion mix sauce (in a tinfoil container), chips, couscous, a samoosa (or omelette — one can't tell from the picture) and a juice box at a quarantine hotel at Gatwick in the UK on Saturday.

The actor, best known for his roles in the hit movie Withnail and I and more recently in Star Wars: The Rise of Skywalker and Loki, complained about the meal on his Instagram account.

Higher hospital admissions among children during a fourth wave of Covid-19 infections in South Africa that is driven by the Omicron variant should prompt vigilance but not panic as infections have been mild, a health official says.

A large number of infants admitted with Covid-19 last month in Tshwane, the metropolitan area that includes the capital Pretoria, raised concerns that the Omicron variant could pose greater risks for young children than other coronavirus variants.

Scientists have yet to confirm any link and have cautioned that other factors could be at play.

Lower risk of getting Covid-19 by getting vaccinated before holiday season: Health department