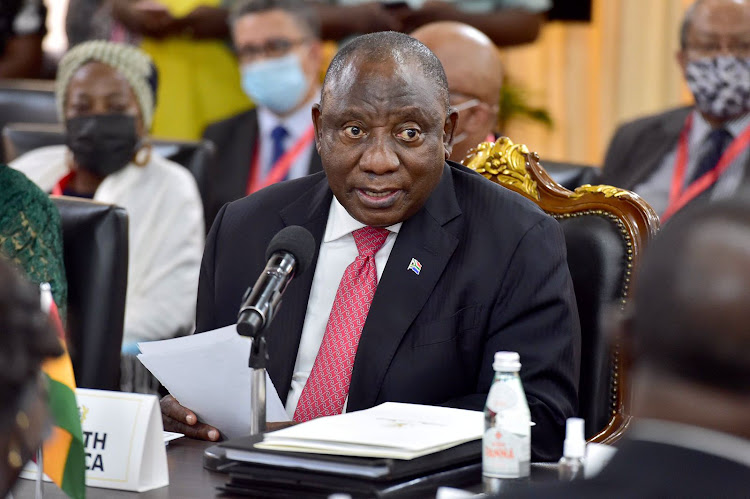 President Cyril Ramaphosa said it is essential to make South Africans aware of the dangers of not being vaccinated against Covid-19.
Image: GCIS

President Cyril Ramaphosa on Sunday said he was waiting for a report back from a task team he established to investigate the possibility of making vaccination mandatory.

“When the National Coronavirus Command Council  meets, I am expecting a report from the task team we set up as well as the inter-ministerial committee. There needs to be a report and this needs to happen very quickly because with the rising wave of infections, we need to act quickly so cabinet can take a decision on this matter,” said Ramaphosa.

On making the vaccines mandatory, President Cyril Ramaphosa says he is leaving it to the nation to discuss. @TimesLIVE pic.twitter.com/xXEGbG3U5x

Speaking on a SAA flight shortly after concluding bilateral talks with Ghana, Ramaphosa said the task team is meant to be active.

Earlier in the pandemic, Ramamphosa on numerous occasions told South Africans they would not be compelled to be vaccinated. However, the increasing number of Covid-19 infections, the mutating variants and the slump in the vaccination drive has seen government consider the option which some countries have made mandatory.

During his recent address to the nation following the discovery of the Omicron variant, Ramaphosa announced he had appointed a task to undertake a broad consultative process on making vaccine mandatory.

Asked about the task team, on Sunday afternoon Ramaphosa said the process may be slowed by the intensity of consultations and talking to sectors of society.

Ramaphosa said he was “willing to engage with some of those constituencies”.

“We live in a country where people have strong views, for and against, and my task as a leader is to nudge everyone in the same direction.

“Through the dialogue I said we should have, hopefully we can get everyone to move in a direction where we will all be aware about the dangers of not being vaccinated.

“Vaccination is still our strongest weapon against Covid-19 and I believe we should give our people a chance so they can see the dangers of not being vaccinated.”

Reflecting on his visit to Ghana, which was part of his four-nation tour to West Africa, he said “it had been most successful.”

“The engagements between ourselves as presidents and our delegations were outstanding. They were not the usual stale type of state discussions.

“There was a lot of discussion, innovation, new ideas that came to the fore and we have been able to consolidate our relationship.

“We gave meaning and life to the by-nation commission (BNC). When we meet in two years’ time again I think we will able to take the relationship to another level.

“The cherry on top was getting the business council to be a substructure of the BNC. Every time we meet we will have business not just being an appendage but a part of the discussion. They will be able to raise issues of concern, like issues about a conducive climate to do business.

“As [Ghana’s] President Nana Akufo-Addo said, we must set the policy framework so they can conduct business. Government should not be in the business of business.”

Ramaphosa said businesses should be left to “do business, make profits and pay taxes. We must create the climate.”

Happening now: President Cyril Ramaphosa has planted the tree of life at the Kwame Nkrumah Mausoleum. "I want to do it myself, you want people to say I'm lazy," he says.@TimesLIVE pic.twitter.com/dLwcKWNqYx

On a lighter note Ramphosa said he had enjoyed jollof rice in the country.

“I have enjoyed the rice here, very different from ours, and I want to see jollof rice in SA.”

When asked to choose which he enjoyed more between the Nigerian and Ghanaian jollof, he said: “The Nigerian one. I whispered something to my wife and she said ‘bring some home’ but I have been a bad boy in that regard. I have not bought any.”

Economic development is focus for Cyril Ramaphosa during Ghana visit

Do not panic. This was the call made by President Cyril Ramaphosa on Saturday night in the face of increasing Covid-19 cases in South Africa.
Politics
1 month ago

Before President Cyril Ramaphosa was received with much pomp and ceremony in Abidjan, Ivory Coast, his delegation held difficult conversations in ...
News
1 month ago