Slain whistle-blower's brother in court on Thursday, as accused remain in custody for now 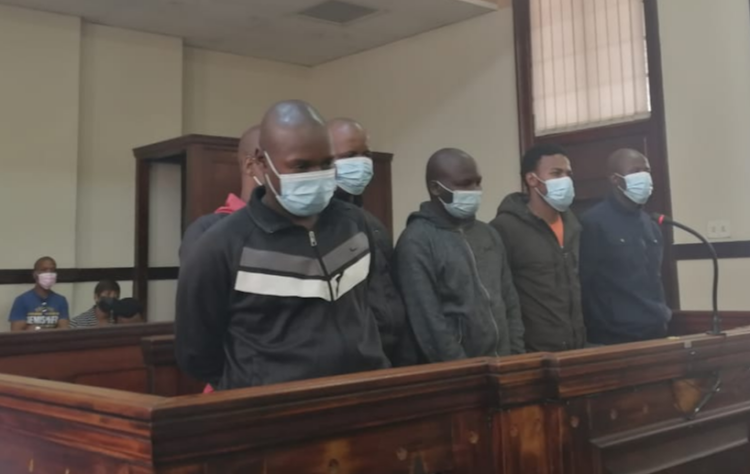 The accused remain in custody while the magistrate considers his decision on the bail applications.
Image: Belinda Pheto/TimesLIVE

The issue of the nationality of one of the six men accused of killing Gauteng health whistle-blower Babita Deokaran was resolved on Thursday with his mother in KwaZulu-Natal verifying he is South African.

Phakamani Hadebe, Zitha Radebe, Phinda Ndlovu, Sanele Mbhele, Siphiwe Mazibuko and Siphakanyiswa Dladla were arrested for killing Deokaran outside her home in the south of Johannesburg in August. They are applying for bail in the Johannesburg magistrate's court.

The case had been postponed to Thursday to verify the nationality of Ndlovu, with state prosecutor Steve Rubin previously advising the court that he initially told the investigating officer he was Zimbabwean. He then made a U-turn on this claim.

Rubin told the court that a home affairs witness could not be in court but said the state and defence had agreed that an affidavit by the mother of the accused would be sufficient.

Advocate Peter Wilkins for the defence read the affidavit into the record and the mother confirmed that she gave birth to Ndlovu in rural KZN.

In her affidavit, the mother stated that she is a self-employed traditional healer.

Magistrate Simon Sibanyoni postponed the case to December 20, saying there was much to consider.

Deokaran's brother, Rakesh, was present in court with another male relative. They became emotional when the accused arrived in court from the holding cells. Rakesh said he felt he needed to be in court for the proceedings.

SIU to hand Covid-19 corruption report to Ramaphosa by Friday

'They stopped me from fighting corruption,' says axed health official

‘Do they have a fixed address?’ Babita Deokaran murder suspects’ lawyer quizzed

On the day Babita Deokaran should have been celebrating her 53rd birthday, six men accused of killing her appeared in the Johannesburg magistrate’s ...
News
6 months ago

The corruption whistleblower, who was gunned down outside her Winchester Hills home in the south of Johannesburg in August, would have turned 53 on ...
News
6 months ago