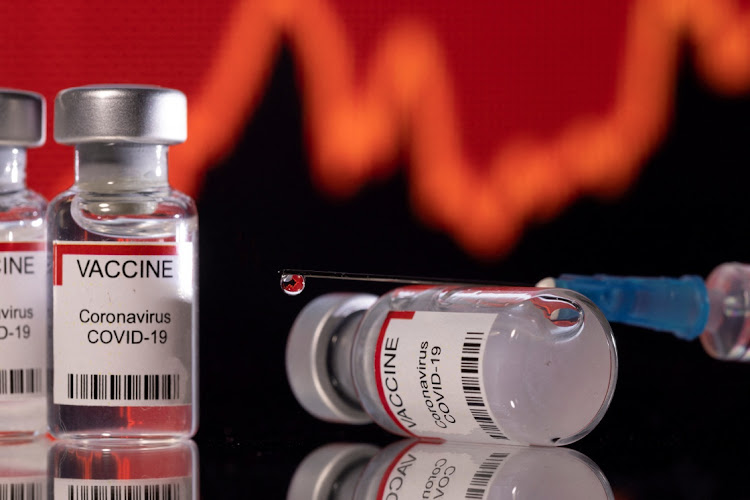 Vials labelled "VACCINE Coronavirus Covid-19" and a syringe are seen in front of a displayed graph in this illustration taken December 11, 2021.
Image: REUTERS/Dado Ruvic/Illustration

Deputy president David Mabuza would be taking over "all responsibilities" for the next week, according to a statement issued shortly after 10pm.

The National Institute for Communicable Diseases said on Sunday that 37,857 new Covid-19 cases have been confirmed in the past 24 hours, but more than half of these are “retrospective cases” as a result of an IT glitch.

The 37,875 new cases is significantly higher than the previous record of 26,645 which was recorded at the peak of the third wave on July 3.

Just days after reopening bookings for flights from six Southern African cities, Doha-based Qatar Airways has reissued travel advice saying it will not accept passengers travelling from these countries.

The news, which tourism minister Lindiwe Sisulu welcomed with an official statement on Friday, allegedly prompted a rush of bookings.

The Competition Commission will not be fining private labs found to have been excessive and abusive in their pricing of Covid-19 tests.

The commission announced on Sunday that polymerase chain reaction (PCR) tests had been reduced from R850 to R500 including VAT effectively immediately.

Commissioner Tembinkosi Bonakele said the intervention by the commission was aimed at mitigating the economic and social affect of the Covid-19 pandemic.

A team of Russian scientists has arrived in SA to study the latest Sars-CoV-2 variant.

The team, which includes members of Russia's health ministry and consumer and health welfare watchdog, took off from Volgograd in southern Russia on Saturday and flew to  Cape Town.

The visit comes in the wake of an invitation from President Cyril Ramaphosa for Brics member states to send scientists to do research alongside SA experts into the virus and its mutations. Brics refers to the group of five emerging economies comprising Brazil, Russia, India, China and SA.

Mazepin will not be replaced and Haas will run with only one driver, Mick Schumacher, because rules prohibit a driver who has not taken part in at least one session from racing on Sunday.

"Nikita is physically well, having been asymptomatic, but he will now self-isolate and adhere to the guidelines of the relevant public health authorities, with safety the ultimate priority for all parties concerned," the American team's statement said.

South Africans will no longer be paying exorbitant prices for Covid-19 tests after an investigation into “unfairly inflated, exorbitant and, or unjustifiable” prices charged to consumers by private laboratories.

The polymerase chain reaction (PCR) tests will  now be reduced from R850 to R500 including VAT.

The PCR tests detect genetic material from a specific organism, such as a virus, and are now the standard proof for travel and other purposes.

Social partners at the National Economic Development and Labour Council (Nedlac) had an eventful and busy year in achieving their goals towards facilitating social dialogue and putting in place measures to curb Covid-19, inputting into policy and legislative process, and setting up processes to track the implementation of commitments made by all social partners in the Economic Reconstruction and Recovery Plan (ERRP).

A Covid-19 Nedlac rapid response task team has worked to mitigate the impact of the pandemic and the lockdown to enable the economy to reopen safely. The devastation of the pandemic would have been more severe had it not been for their efforts regarding relief, promotion of vaccinations and collaborating on regulations to safely open the economy.

Booster shots up to 75% effective against Omicron, UK says

Covid-19 dumps a tsunami of pets on shelters’ doorsteps

Many pets across SA face an unwanted Christmas this year season as Covid eats away at their owners’ livelihoods.

Allan Perrins of the Animal Welfare Society of SA said the organisation is swamped with unwanted pets, mainly cats and kittens, but also dogs, rats, rabbits — even seagulls.

“We cannot think of a better way to describe [it] ... than by referring to it as a tsunami,” Perrins said.

A shelter in Philippi, Cape Town, had just taken in three adult cats and 16 kittens from someone who could not afford to feed them when Sunday Times spoke to Perrins this week.

Covid-19 dumps a tsunami of pets on shelters’ doorsteps

Social media is buzzing with the theory that the Omicron variant of Covid is a positive development if it spreads like wildfire but does not cause severe disease, similar to flu and the common cold.

The disease would then be endemic, meaning it isn’t eradicated but circulates at a manageable level.

But experts say it is too early to make this call because we do not yet have enough data and other variants could be in the pipeline.

Wolfgang Preiser, a professor of virology at Stellenbosch University, said endemicity is when “the virus changes, and becomes less virulent [responsible for severe disease] but remains highly transmissible, or even more so”.

South Africans should have a clear idea by next week if the milder symptoms associated with the Omicron variant are a consistent pattern and if Covid hospital admissions will remain lower than in previous waves, say Gauteng clinicians and hospital executives. The early signals so far are encouraging.

Wits University professor of medicine Francois Venter said: “Every passing day makes it more reassuring that this wave is milder than wave 3 [driven by] Delta and by next week we may be able to exhale.”

Unlike previous waves, only a small proportion of the people infected by the virus in the fourth wave have been admitted to hospitals, data shows.

South African Medical Association chair Dr Angelique Coetzee said: “This wave is not the same as Delta, which was terrible. At this stage the cases are very mild.”

Police have prioritised an investigation into threats against leading Covid-19 researchers and scientists, some of whom advise the National Coronavirus Command Council.

De Oliveira and his team recently came under fire from some members of the public after identifying the Omicron variant, which led to several countries shutting their borders to SA.

President Cyril Ramaphosa says the travel ban imposed on SA after the detection of the Omicron variant made him realise that the “paternalistic” developed world was not sincere in its pledge to help African countries overcome the Covid pandemic.

On the last leg of his tour, an irate Ramaphosa spoke out against developed countries that closed their borders when South African scientists identified the new variant.

The reaction of such countries as the US, the European Union and the UK — which put SA back on its travel red list — opened his eyes to the reality of the West’s approach, the president said.

“For me — the Omicron issue — that is when the penny dropped. I realised that much as they say that they are our partners, they are really playing a different game to us, and in the end do not have a disposition that demonstrates that the partnership is mutually beneficial,” Ramaphosa said in an interview in Senegal this week.