‘It must be a very expensive signature’: Here’s what Mzansi thought of Zuma’s R1k book promo 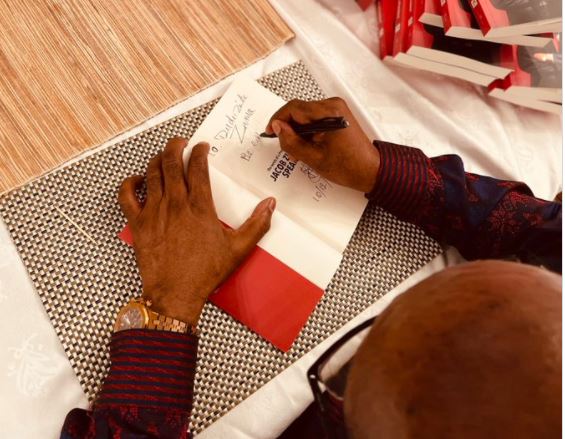 Former-president Jacob Zuma signs a copy of his book ahead of its launch this past weekend.
Image: Twitter via Dudu Zuma-Sambudla

The promotion around former president Jacob Zuma’s book has topped social media’s trending list, with some questioning the price tag.

Titled Jacob Zuma Speaks, the book can be bought for R300, or R1,000 for a signed copy, at “car boot sales” in Johannesburg

“They sold like hot cakes in 20 minutes , easily, more than 100 copies were gone.

“We brought 100 copies and way more people bought the book than we could provide so we have backlogs,” he said.

Speaking during the virtual launch of the book, Duduzile Zuma-Sambudla said it was the first of many.

“I want to let SA know this is going to be the first of many books my dad is going to be writing, and involved in. The book that you are all waiting for will be coming soon,” she said.

The book comes after the former president was released from prison on medical parole in September due to ill health two months into a 15-month sentence for contempt of court after refusing to appear before the state capture inquiry.

Zuma said the book will set the record straight on some of the “untrue” stories about him.

“The untruth about the work we have done demonstrated the truth is important for society to be well informed, to know what is happening. There is no use to create stories because you have powerful machinery to do so.”

On social media, many users believed the R1,000 price tag attached to signed copies of the book was steep.

Some who claimed they had bought the book said they were disappointed by its content.

Jacob Zuma Speaks. One book, 4 different authors? Not really a book then, more or a WhatsApp group that went to print.

Oh... did anyone go to McDonald's to meet Mzwanele for a R1000 copy of Jacob Zuma's colouring book? And was Mzwanele dressed as Ronald McDonald? 🤔 pic.twitter.com/e1htHYshet

Zuma's book was badly edited. No, in fact it wasn't edited at all. Too many high school errors. You @mzwanelemanyi have failed the old man. Again. Try vernac next time. Yohh 🚮

This book will be sold out quite fast! pic.twitter.com/Z4ruRTrOLB

Zuma's book is just more tears from Nasrec 2017. I expected some of the promised secrets at least.

Dudu Zuma-Sambudla's message to visiting ANC councillors: ‘Thanks for giving him his flowers while still alive’

Duduzile Zuma-Sambudla has thanked ANC councillors who visited her father, former president Jacob Zuma, at Nkandla and gifted him with a bull worth ...
News
6 months ago

Zuma’s much-anticipated book to be released this month, says foundation

The book, which has been rumoured to be in the works for the past few years, will be released in the "second or third week" of this month, says the ...
Politics
6 months ago

‘It is less of a dream but more of conversations’: Duduzane Zuma on running for president

Duduzane Zuma says his presidential bid is more than a dream, despite having no experience in politics.
News
6 months ago