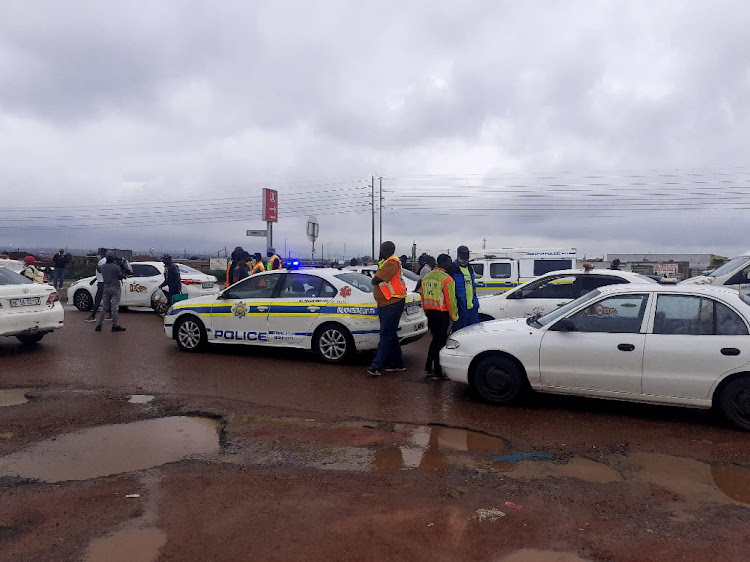 Members of the SA National Taxi Council take part in a motorcade on Monday to raise awareness over the killing of taxi drivers and commuters being robbed in the Tshwane area.
Image: Shonisani Tshikalange

This is according to the SA National Taxi Council (Santaco), which has identified the areas as danger zones.

On Monday, the taxi industry took part in a motorcade from Pretoria to Soshanguve to raise concerns about the killing of taxi drivers and robberies by armed criminals.

Santaco Tshwane spokesperson McDonald Makata said the organisations had received a flood of complaints from commuters.

#Tshwane Taxi Industry has joined hands in a #motorcade to fight against the killing of the taxi drivers and commuters, robberies that are happening while commuters are in transit by armed thugs or syndicate.@TimesLIVE pic.twitter.com/nv66WPDcdg

“We have instances where four drivers have been killed after being hijacked with all their monies taken away. As the taxi industry, we had to stand up and put a stop to it. This is also the beginning. We just wanted to make them [criminals] aware that we are aware, so that when we deal with them they shouldn't say we didn't warn them,” he said.

Makata said the Pretoria CBD was “rotten to the core”.

“Normally in the afternoon we load people without money because they have been mugged down Lillian Ngoyi [road]. The CBD is not safe. We are also making a plea to the government, if they need manpower, here is the manpower. We will work. We can clean Pretoria within three months,” he said.

He said the taxi industry would be ramping up its security efforts during the festive season and has called for support from traffic officials.

“Whoever is doing this, whoever's behind the mugging of commuters and killings is playing with fire. Once we catch him or them, we will give them over to the police. I don't know in what position, but we will definitely hand them to the police.

“We can't just fold arms when our business is being tampered with,” Makata said.

Makata said they were aware that some drivers were implicated in the violence.

“This has to do with some of our drivers because a neutral person from outside, I think, wouldn't even think to tamper with the taxi industry ...  We don't want people who are not registered with the association driving the association's cars because we will end up not knowing what is going on.

“Our own drivers as well ... we are aware that some of them are involved. If they are we will hand them over to the police,” he said.

Commuters at Erasmus said they had lost trust in the taxi industry.

Jack Selwane, who was in a queue, shared how he was mugged last week. He said he was tied up and placed inside a boot, robbed of his bank cards and forced to reveal his pin code. He said the area was a crime hotspot and that he lives in fear.

“We are saying they must put a stop to what they are doing. They are hurting the industry. The industry is already bleeding from Covid-19, so it cannot be that we are going to lose riders because of hooligans who want to make a quick buck. We want to catch them, we are going to deal with them and hand them to the police,” Makata said.

Makata said the West Rand and East Rand associations had also been complaining about the same problem.

He said the incidents have been increasing.

“Now we are left with Mamelodi, that is the hottest of them all,” he said.

Last month, TimesLIVE reported that members of the Mamelodi Local and Long-distance Taxi Association marched to the Silverton police station in Tshwane to hand over a memorandum of demands after five taxi drivers were murdered in ongoing violence.

SowetanLIVE also reported that Mamelodi taxi drivers were fed up with the spike in hijackings, robberies and killings of taxi operators, allegedly by a syndicate, on Solomon Mahlangu Drive and at the corner of Zambezi and Moloto roads in the township east of Pretoria.

Seven people have been arrested in connection with the recent taxi violence in Johannesburg and Soweto as Gauteng’s anti-taxi violence unit strives ...
News
6 months ago

Several taxis were set on fire in the Johannesburg CBD on Saturday in an incident believed to be related to conflict in the industry.
News
7 months ago