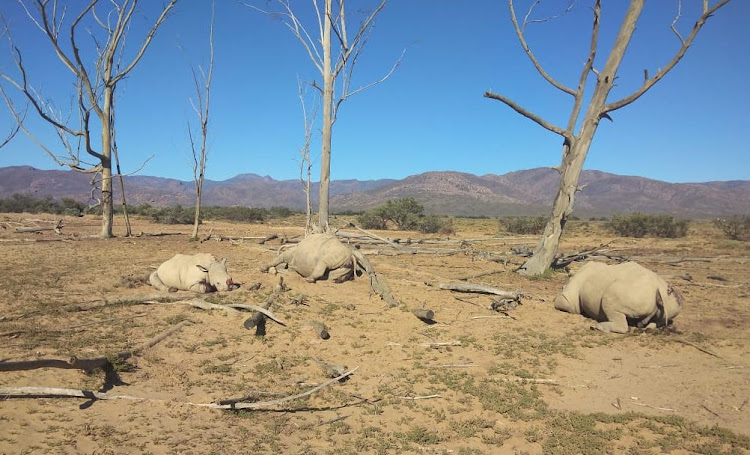 Three of the four rhinos killed for their horns in the Western Cape on December 8 2021.
Image: Inverdoorn Game Farm

Since the beginning of December, 24 rhino carcasses have been found in game reserves across SA, the department of forestry, fisheries and environment said.

The department condemns the continued poaching of these “iconic species for their horn, and commends the work being done by rangers and security officials over the festive period to stem the killing of rhino”, Modise said.

Four suspects have been arrested in connection with the massacre of four rhinos, including one pregnant female, at the Inverdoorn Private Game ...
News
6 months ago

In the first 14 days of December, nine alleged poachers were arrested, he said.

The department will provide an update on the total number of rhinos killed for their horn this year early in 2022.

The most recent case that grabbed the attention of the sector was that of the four rhinos massacred at the Inverdoorn Private Game Reserve outside Cape Town on Wednesday.

One of the massacred rhinos was a pregnant female and another female is recovering from injuries.

Searl Derman, owner of Inverdoorn Private Game Reserve, said the 24-hour Anti-Poaching Unit raised the alarm when they found the horrific scene while on regular patrols.

“The team acted fast as a fifth rhino was missing. Tracking operations were immediately activated on the 10,000 hectare reserve while management, conservation teams, wildlife veterinarians, law enforcement and others were notified and dispatched to the scene.

Stellenbosch University MSc student Dakota Guy and her fellow researchers are trying to formulate replacement milk to be used to bottle-feed orphaned ...
News
8 months ago

“Large calibre rifle rounds from silenced weapons were identified on the scene and patrols were intensified to protect all against the heavily armed perpetrators,” said Derman.

Richard Yolk, CEO Wildlife Ranching SA, said it was common to see a rise in poaching during the festive season.

“We see this sort of increase in poaching at times like these because people are relaxed and have let their guard down. With the rains it is also hard to see tracks as they are washed away.”

Index paints a gloomy picture of the global scourge, which has increased during the pandemic
News
8 months ago

Two suspected rhino poachers were arrested on a farm in Vierfontein in the Free State on Thursday, provincial police said.
News
10 months ago