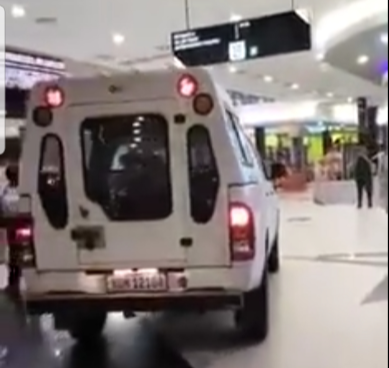 A municipal employee was caught on video driving into the Galleria Mall in Amanzimtoti, south of Durban.
Image: Screengrab via Facebook

The eThekwini municipality is investigating an incident caught on video in which one of its employees was seen driving inside the Galleria Mall in Amanzimtoti, south of Durban.

Council spokesperson Msawakhe Mayisela said they were aware of the incident, which attracted attention on social media on Friday.

“The city is fully aware of the video that is doing the rounds on social media platforms,” Mayisela said.

“The investigation with regards to the matter is commencing and we will communicate the outcome of such an investigation.”

He said the city of eThekwini would not hesitate to act in the event the city's property was abused.

“We will never condone such behaviour. We will get to the bottom of this matter,” said Mayisela.

Chris Hani region treasurer Madoda Papiyana, who doubles as the district council's chief whip, resigned on Saturday afternoon - hours after he was ...
News
2 years ago

The EFF in the Eastern Cape wants stringent action to be taken against a provincial health department official who allegedly blacked out behind the ...
News
1 year ago