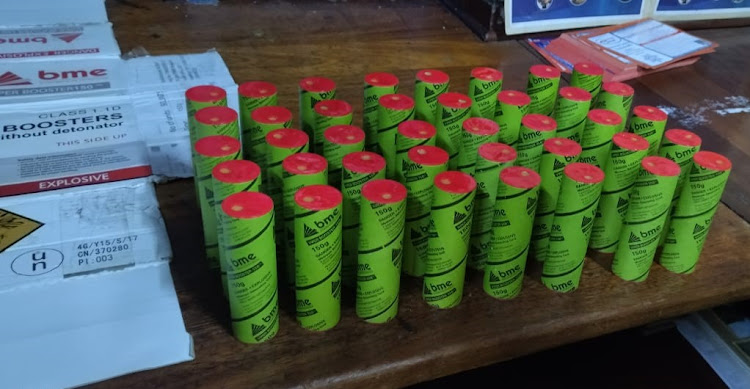 Some of the explosives police found in an abandoned house in Mooi River on December 18 2021.
Image: SA Police Service

Police said they may have averted ATM or cash-in-transit bombings by recovering explosives from an abandoned house in KwaZulu-Natal on Saturday.

“These explosives have been confirmed to be Viper boosters which are generally used in mining,” he said.

“Though not confirmed yet, it is suspected that these explosives may have been intended for automated teller machine bombings and/or cash-in-transit heists as similar explosives are known to have been used for this purpose before.”

Naidoo said no arrests had been made, and asked anyone with information about the explosives to contact the police on 08600-10111.

“All information will be treated with strictest confidence and callers may remain anonymous,” he said.

Mpumalanga police have launched a manhunt for about 15 armed robbers after an ATM bombing in the early hours of Wednesday.
News
6 months ago

Police were involved in a shootout with a gang of men who allegedly bombed three ATMs at a Limpopo shopping complex on Friday.
News
7 months ago