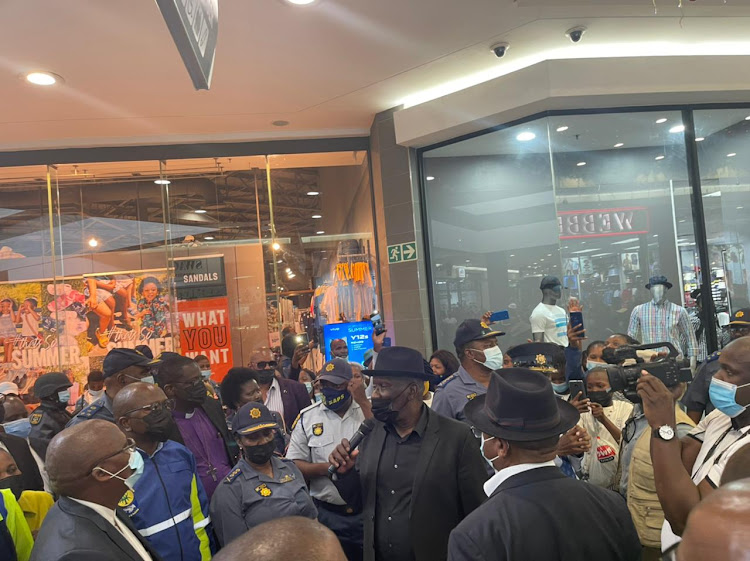 Police Minister Bheki Cele addressing members of the police in Mthatha on the issue of their safety while policing.
Image: SAPS

Police minister Bheki Cele has urged police officers to act decisively when confronted by criminals and not to compromise their own safety.

Addressing a police parade in Mthatha in the Eastern Cape at the start of the safer festive season inspection tour on Tuesday, Cele warned of the desperation of some criminals who would not hesitate to end the life of a police officer in pursuit of what they want.

“Police officers, you are the country’s assets, you are useful to the country when you are alive and well. I’m making a call to all of you this festive season, while enforcing the law, protect yourself as stipulated by the law.

“Simply put, when confronted by gun-toting criminals, don’t hesitate, because when a criminal pulls a gun on you, the only thing that will follow is you getting shot and possibly being killed,” Cele said.

According to the national crime statistics for the 2020/2021 financial year, 80 police officers were killed on and off duty, the police ministry said.

It said 17 members were killed in the Eastern Cape, the second highest figure after KwaZulu-Natal, which accounted for 21 police murders.

The ministry said the eighth leg of the tour moves to the Northern Cape on Wednesday and to KwaZulu-Natal on Thursday.

The Hawks’ serious organised crime investigation team has arrested two men linked to Transnet fuel theft worth about R500,000 in the Alrode South ...
News
7 months ago

There is likely to be a spike in home invasions during the festive period, with more criminals gaining entry through front or back doors.
News
7 months ago

Skeleton found buried at foot of sand dune in Gqeberha

Gqeberha police are combing for clues after a skeleton was found partially buried at the foot of a sand dune on Sardinia Bay beach.
News
7 months ago