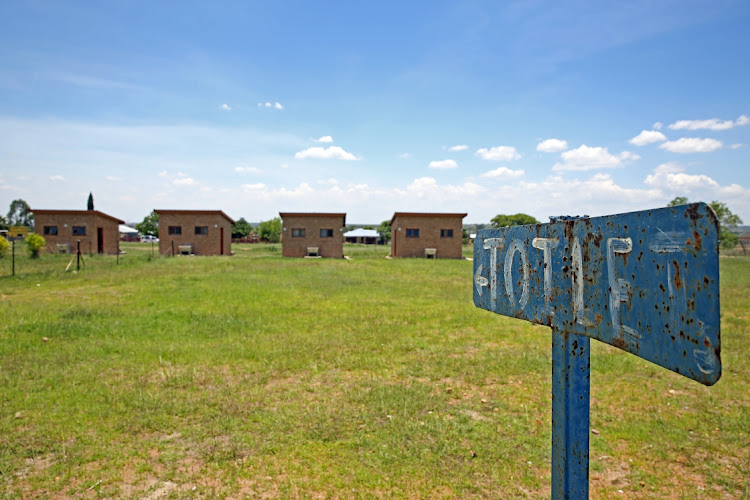 Toilets were subsequently built at the school where Michael Komape, 5, lost his life.
Image: Thapelo Morebudi

“This requires the eradication of pit latrines. This is government's own target set way back in 2013. In 2014, through its report titled 'the right to access sufficient water and decent sanitation', the commission cautioned that a lack of access to sufficient water and decent sanitation violates several basic human rights, including the right to dignity, education and a safe and healthy environment,” said Chohan.

Cabinet ministers flute on about the fourth industrial revolution, yet our schools are without safe, clean lavatories
Opinion & Analysis
1 year ago

Limpopo has been flagged as one of the leading provinces with pit latrines in schools, and the Limpopo high court granted a structural interdict against the provincial department of education to revise a sound plan on the eradication of pit latrines in a shorter time than advised by the department of basic education.

Commissioner Andre Gaum said they will consult with lawyers on whether to litigate in Limpopo.

Chohan said the litigation is necessary to stop further deaths, such as that of Michael Komape, who drowned after falling into a pit latrine at Mahlodumela Primary School in Chebeng Village, outside Polokwane, in January 2014.

“Michael drowned in human excrement. He was just five years old. Prior to this, Lister Magongwa died in 2013 after the walls of a toilet collapsed on him at Moshe Primary School, also in Limpopo. In 2017 and 2018, another two lives were lost to unsafe sanitation when Siyamthanda Mtunu and Lumka Mkhethwa, both from the Eastern Cape, drowned in pit latrines,” said Chohan.

Litigation is expected to start next year.

The Limpopo education department found itself in court last week because of its failure to eradicate pit toilets at its schools. Chris Barron asked ...
Opinion & Analysis
1 year ago

Pupils from more 3,000 schools from six provinces in the country risk falling into pit toilets every day, while others from at least 253 schools are ...
News
10 months ago

Equal Education and the Equal Education Law Centre have called for a speedy investigation into the principal of Luthuthu Junior Secondary School ...
News
1 year ago