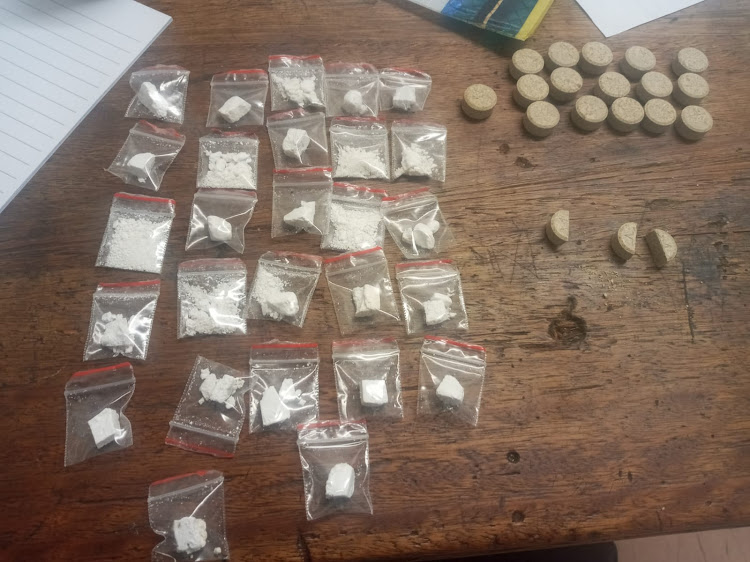 These are some of the drugs that police confiscated on Wednesday.
Image: SAPS

An intelligence-driven operation led to the discovery of a drug laboratory and the arrest of two suspects in Kameeldrift, Tshwane, on Wednesday, Gauteng police said.

They were among several suspects arrested in different areas of Gauteng as police continued to make inroads in the fight against the proliferation of drugs.

Drugs confiscated in the Kameeldrift operation included cocaine and dagga.

“Both suspects were arrested and charged with manufacturing and possession of drugs, possession of suspected stolen property and bribery,” police spokesperson Lt-Col Mavela Masondo said in a statement.

In Eldorado Park, Johannesburg, police from the K9 unit arrested a man after he was found with drugs that included heroin, Mandrax and crystal methamphetamine.

“A search warrant was obtained and executed. Upon searching the house, police found different kinds of drugs ready to be sold. The suspect is expected to appear at the Lenasia magistrate’s court in due course,” he said.

Two suspects were arrested in different places in Sophiatown for dealing and possession of drugs.

Masondo said police officers from crime intelligence received information about a man dealing in drugs. He was found in possession of drugs.

“Further information led the police to another house in Sophiatown where a second suspect was arrested after he was found with Mandrax.”

Gauteng police commissioner Lt-Gen Elias Mawela said he was pleased with the collaboration between the various units and the information officers received from the community.

“We remain committed and we will continue with the fight against the scourge of drug abuse and ensure that those who sell drugs to our community, especially the youth, are identified and brought to book,” Mawela said.

There is likely to be a spike in home invasions during the festive period, with more criminals gaining entry through front or back doors.
News
6 months ago

Almost in its 10th year, SA Community Crime Watch (SACCW) is a registered non-profit organisation which helps solve hundreds of cases every year, and ...
News
6 months ago

Police minister Bheki Cele says law enforcement agencies are ready to handle any unrest that could be prompted by former president Jacob Zuma being ...
News
6 months ago