In his own words: Desmond Tutu's unwavering stance on human rights 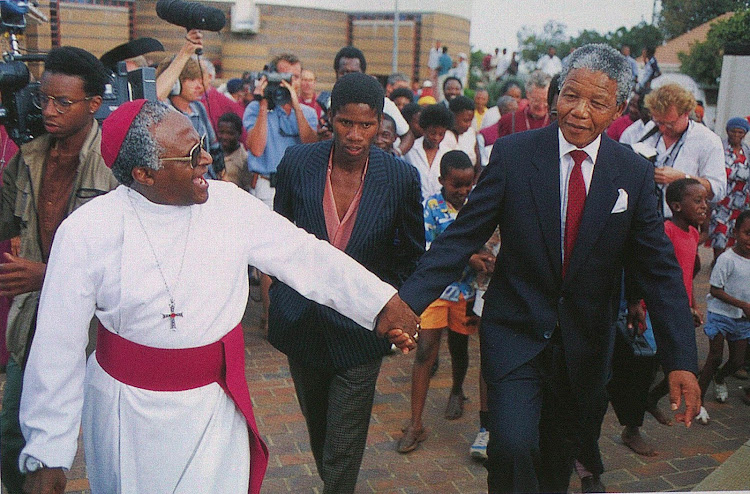 Anglican Archbishop Emeritus Desmond Tutu was responsible for countless notable quotes throughout his life as an activist and elder. Here are 12 of his best:

“There is enough of the good things that come from God's bounty, there is enough for everyone, but apartheid has confirmed some in their selfishness, causing them to grasp readily a disproportionate share, the lion's share, because of their power. They have taken 87% of the land, though being only about 20% of our population. The rest have had to make do with the remaining 13%.”

2. Tutu in 1985 warning about the unacceptable use of necklacing following an incident in Duduza, Ekurhuleni, when a tyre was placed on Maki Skosana and she was burnt to death. Skosana was accused of being an ‘informer’

“If you do this kind of thing, I will find it difficult to speak for the cause of liberation. If the violence continues, I will pack my bags, collect my family and leave this beautiful country that I love so passionately and so deeply. I say to you that I condemn in the strongest possible terms what happened in Duduza.

Archbishop Desmond Tutu has been awarded the Human Rights Global Treasure Award from Article3.org, in recognition of his lifelong commitment to ...
News
1 year ago

3. December 16 1995. Tutu addressing the first gathering of the Truth and Reconciliation Commission (TRC), of which he was appointed chairman

“They say those who suffer from amnesia, those who forget the past, are doomed to repeat it. It is not dealing with the past to say facilely, let bygones be bygones, for then they won't be bygones.

“Our country, our society would be doomed to the instability of uncertainty — the uncertainty engendered by not knowing when yet another scandal of the past would hit the headlines, when another skeleton would be dragged out of the cupboard.”

4. Tutu as a keynote speaker at the 2004 Nelson Mandela Lecture commenting about the ANC’s habit of stifling debate

“We should not too quickly want to pull rank and to demand an uncritical, sycophantic, obsequious conformity. We need to find ways in which we engage the hoi polloi, the so-called masses, the people, in public discourse through indabas, town-hall forums, so no-one feels marginalised and their point of view matters, it counts.

“Then we will develop a national consensus. We should debate more openly — not using emotive language. We should not be browbeaten by pontificating decrees from on high. It should be possible to talk as adults about these issues without engaging in slanging matches.”

5. Tutu in October 2011 commenting on the Jacob Zuma government

6. Tutu in 2011 following the killing of Libyan dictator Muammar Gaddafi

“The manner of the killing of Muammar Gaddafi totally detracts from the noble enterprise of instilling a culture of human rights and democracy in Libya. The people of Libya should have demonstrated better values than those of their erstwhile oppressor.”

A week after the nation celebrated the 89th birthday of Archbishop Emeritus Desmond Tutu, the spotlight has shifted to his wife Leah “Nomalizo” as ...
News
1 year ago

7. Tutu writing in the UK’s Observer in September 2012 calls for former British prime minister Tony Blair and former US president George Bush to be tried over their role in the attack on Iraq

“The then leaders of the US [George W Bush] and Great Britain [Tony Blair] fabricated the grounds to behave like playground bullies and drive us further apart. They have driven us to the edge of a precipice where we now stand — with the spectre of Syria and Iran before us,” he said.

“The question is not whether (Iraq president) Saddam Hussein was good or bad or how many of his people he massacred.

“The point is that Mr Bush and Mr Blair should not have allowed themselves to stoop to his immoral level.”

“Many have lamented the fact that [former president Nelson] Mandela served only a single five-year term. From the perspective of the truth commission, his departure from office was a mortal blow. I do not believe Mandela would have left the commission’s business so scandalously unfinished, as his successors have.

“By ‘unfinished business' I refer specifically to the fact that the level of reparation recommended by the commission was not enacted, the proposal on a once-off wealth tax as a mechanism to effect the transfer of resources was ignored, and those who were declined amnesty were not prosecuted.”

9. Tutu in April 2014 commenting about his exclusion from Mandela's funeral in December 2013. He later received a last minute invitation after a public outcry

“I was quite astounded myself but I tried to pretend I was humbled and didn't really mind. It was not true, I was very hurt. He was a very dear friend.

“We made up for it a little bit. I was asked to preach at a wonderful memorial held at the Westminster Abbey. They have the Right to say who would speak, but I think they shot themselves comprehensively in the foot in snubbing me. It was sad.”

What Obama’s book says about Zuma, Mandela, Tutu and the ANC

Former US president Barack Obama has lifted the lid on his thoughts about the state of SA during his presidency and several SA leaders, including ...
Lifestyle
1 year ago

10. On August 14 2014 Tutu, in an article for Haaretz newspaper in Israel, calls for a global boycott of Israel and urges Israelis and Palestinians to look beyond their leaders for a sustainable solution to the crisis in Israel

“The withdrawal of trade with SA by multinational corporations with a conscience in the 1980s was ultimately one of the key levers that brought the apartheid state — bloodlessly — to its knees. Those corporations understood that by contributing to SA’s economy, they were contributing to the retention of an unjust status quo.

“Those who continue to do business with Israel, who contribute to a sense of ‘normalcy’ in Israeli society, are doing the people of Israel and Palestine a disservice. They are contributing to the perpetuation of a profoundly unjust status quo.

“Those who contribute to Israel’s temporary isolation are saying Israelis and Palestinians are equally entitled to dignity and peace.”

11. Tutu in October 2014 after the government for the third time refused a visa to Tibetan spiritual leader the Dalai Lama to attend the 14th World Summit of Nobel Peace Laureates to be held in Cape Town that month. The summit was later cancelled.

“When His Holiness was prevented by our government from attending my 80th birthday, I condemned that kowtowing to the Chinese roundly and reminded the ANC government that it did not represent me.

“I warned them then that just as we had prayed for the downfall of the apartheid government, so we would pray for the demise of a government that could be so spineless.”

12. In 2016 Tutu endorsed a campaign to change the law so people can choose when to die

“For those suffering unbearably and coming to the end of their lives, merely knowing that an assisted death is open to them can provide immeasurable comfort.

“I have prepared for my death and have made it clear I do not wish to be kept alive at all costs. I hope I am treated with compassion and allowed to pass on to the next phase of life's journey in the manner of my choice.”

Tutu still dances to the tune of justice

Nelson Mandela once told Archbishop Emeritus Desmond Tutu to "act his age". This was because nothing seemed to be slowing down the Nobel peace prize ...
Lifestyle
8 years ago

Archbishop Emeritus Desmond Tutu is internationally acclaimed for his life and work.
News
4 years ago

Archbishop Emeritus Desmond Tutu appealed to South Africans to resuscitate the values associated with its early days of democracy as he marked 30 ...
News
7 years ago