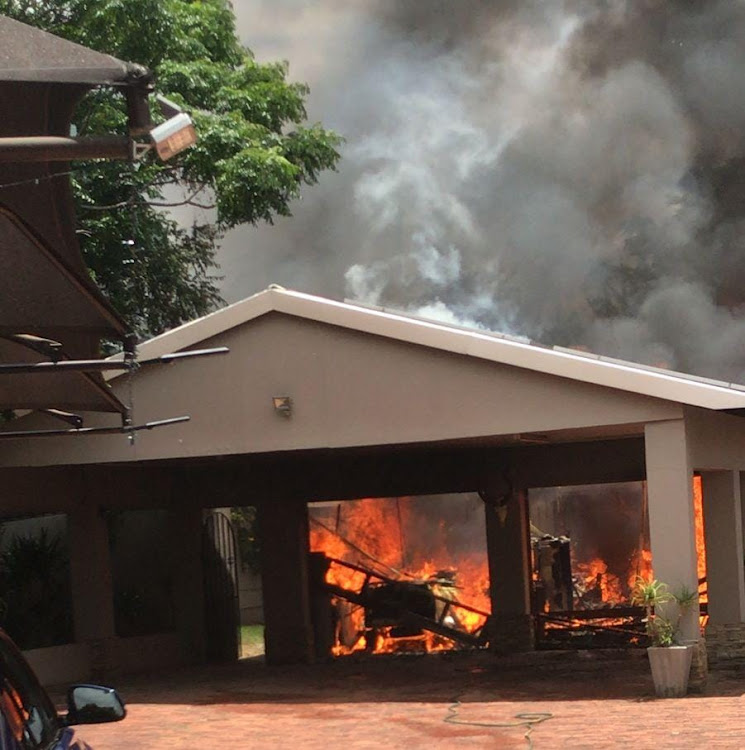 The blazing house from which a blind and deaf dog and two cats were rescued on Sunday.
Image: Emer-G-Med

Paramedic Caitlinn Kruger was on her way home with a friend after getting a haircut on Sunday when she saw black smoke rolling above the northern Johannesburg suburb of Fourways.

“From the black smoke we knew it was a house on fire,” she told TimesLIVE on Tuesday.

Kruger immediately notified the control room at Emer-G-Med, her employer, before going to see what help she could render while emergency services were on the way.

She arrived to find the brick house “fully in flames”" with the shocked family — a woman and her three children — standing outside.

While she was making sure they were unhurt, the woman told Kruger one of their two dogs was still in the house.

“They thought he had already burnt,” she said, adding she decided to check.

“The front door was engulfed in flames but there was a window next to it which I broke. At that moment I saw the dog walk past.”

The family shouted that the dog was blind and deaf and would not respond to her.

All the windows were covered with burglar bars, preventing access. Fortunately, there was a sliding door at the rear of the L-shaped house which was unlocked.

“That side was not on fire but it was full of smoke,” said Kruger. 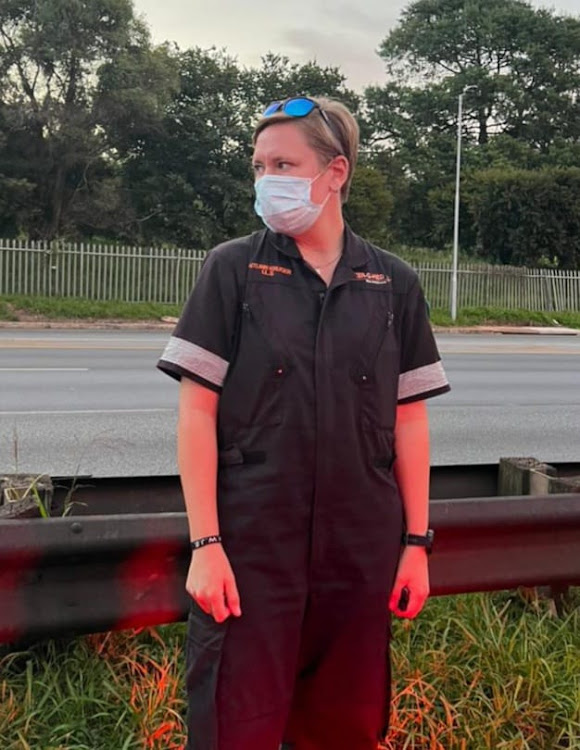 The paramedic entered the room and found the dog, which she described as a “bull terrier type”, picked it up and fled the house.

By that time, the fire brigade were on the scene and beginning to fight the fire when the family realised their two cats were in the house.

“Cats are on the ball and will usually be the first to get out,” said Kruger.

“But the fire spread so fast and they were trapped.”

Firefighters found one cat under a bed and shortly afterwards the second was found.

“They were both lethargic from smoke inhalation,” Kruger said.

“We wrapped one in a towel and brought them out.”

The family, however, lost everything.

“I think they had their phones and that’s all," she said.

Their community has since rallied around, offering the family a place to stay, taking them food and clothing and raising money to help them.

“This is a family with good hearts,” said Kruger, who has been a paramedic for 10 years and would not change her job “for anything”.

“The boy wanted to run inside and save the dog when they realised he was trapped in the house.”

The cause of the fire is unclear.

Several boating accidents along SA's coastline during the week of Christmas prompted the National Sea Rescue Institute to appeal to boaters and ...
News
4 months ago

Paramedics save the day as geese rescued from vacant pool

Emer-G-Med paramedics were called out for an unusual emergency on Wednesday.
News
4 months ago

Severe turbulence was the most likely culprit in a fatal plane crash in Bronkhorstspruit, Gauteng, in early December.
News
4 months ago