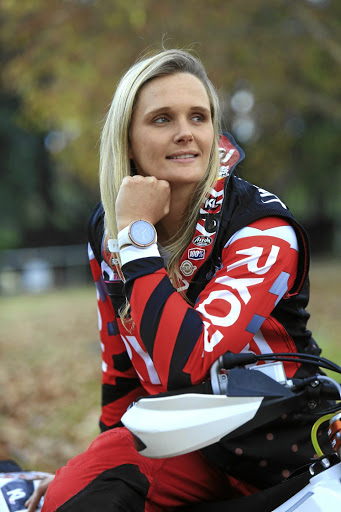 Kirsten Landman, the first African woman to finish the Dakar Rally on a motorcycle in 2020, will not be able to compete at the 2022 Dakar Originals Malle Moto race in 2022 after contracting Covid-19.
Image: Jose Mario Dias

“Shattered” is how enduro and rally racer Kirsten Landman describes losing out on the 2022 Dakar Originals Malle Moto race.

A week before her flight to Saudi Arabia, Landman, 30, tested positive for Covid-19.

“I'm shocked really — especially because I have been isolating on a farm since December 10.”

Landman took her first test on December 19 where she discovered she had Covid-19. Three days later she retook the test and the results were the same.

“I've taken it a few times and I am positive. I have no idea how this could have happened. I have no symptoms and I've been training. [Neither] My resting heart rate, [nor] my [exercising] heart rate has spiked.

“Everything happens for a reason. In Dakar there are high risks and one takes high risks.

“I just look at it in a positive light. I now have more time to prepare and more time to get [mechanically equipped].

“My sponsors at ASP were so supportive. We chatted on the 25th [December] and decided we will do what is right and work together towards 2023.”

Landman was unable to complete the Roof of Africa race in November after a crash. Fortunately, she came out relatively unscathed this year after the horrific crash at the same race in 2013 which nearly ended her life and put her in a coma for 11 days.

“I'm learning to listen to the signs I get in this sport — those little niggles in the stomach. The crash was my first red flag [not to compete in the 2022 Dakar].

“On the first day of the race — about 40km into the race. It was raining and wet. I came over flat plateau onto rock covered in black moss [when I crashed]. I was travelling at about 60km an hour. I got concussed and suffered a whiplash. I also got a hematoma, a big bruise on my hip, which meant I couldn't ride for two weeks. My only training then before the Dakar would have been the time I spent isolating at home.

“I haven't had Covid-19 for two years, and I get it now just before the race.”

Last year at the Dakar, Landman became the first African woman to finish the rally on a motorcycle. She ended third among the women's overall finishers.

After 12 days and 7,500km in the desert dunes, suffering from lack of sleep, freezing conditions and intense heat, Landman said she would never compete in the race again. That was until January when she decided not only to race again but to enter one of the hardest enduro races in the world.

The Dakar Originals Malle Moto race means riding without a backup team and no technical support.

Malle Moto is French for “Trunk Motorbike”, because everything these racers need must fit in an 80l trunk — spare parts, tools, personal belongings, tent and sleeping bag.

Landman, from Hillcrest in KwaZulu-Natal, started riding bikes at the age of eight and went on to compete and win in races around the world, including the Red Bull Sea to Sky, where in 2015 she became the only woman in history to finish in the gold class at any extreme hard enduro event.

“I think we all went into 2021 with crazy expectations. I now get another year to train for the race and I will place no expectations on 2022, and I look forward to racing the Dakar in 2023.”

Kirsten Landman's passion for enduro racing once put her in a coma for 11 days, on the edge of death.
Lifestyle
1 year ago

Hard enduro biker Kirsten Landman made history in the Dakar Rally in Saudi Arabia by becoming one of the first African women, alongside Taye Perry ...
Motoring
2 years ago