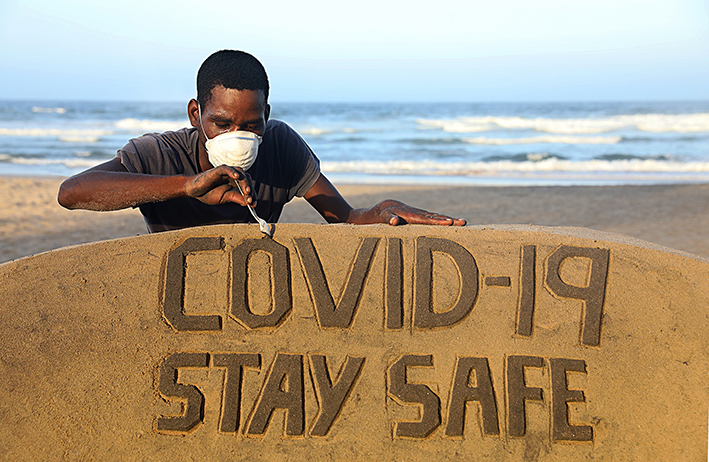 Almost two years later into a lockdown and the country has made some strides, while other things have remained the same.
Image: Sandile Ndlovu

Almost two years into a lockdown and the country has made some strides, while other things have remained the same.

Covid-19 continues to spread at a slow burn, and levels of lockdown have become the new normal.

While many have been vaccinated against the virus, an estimate of over 2 million people have been infected, and over 80,000 are dead.

Here is a look at what has changed — and not changed — since the beginning of the year.

On December 30th the government announced the scrapping of the lockdown curfew with immediate effect.

Afrikaans lobby group AfriForum wrote to Dlamini-Zuma earlier in the year, calling for an end to the curfew.

AfriForum’s Jacques Broodryk. said the group wants to know the reasoning and effectiveness of the curfew in terms of fighting Covid-19

“The continued forcing of curfews upon the population is unacceptable and not grounded in fact-based evidence. Therefore, AfriForum has stepped in to put a stop to this irrational policy,” he said.

As the end of the year neared, the DA joined the calls for an end to the curfew, while social media users pleaded with Ramaphosa to lift the curfew so they could crossover the new year at church services.

Since vaccines were made available for citizens, over 27 million vaccines have been administered.

In an effort to get as many people vaccinated, the Gauteng health department doubled the incentive amount of the Vooma vaccination voucher to R200 to get more people over 50 vaccinated.

“A large number of unvaccinated people aged 50+ are predicted to die in this fourth wave. We want to make sure the 50+ have the taxi fare to get to vaccination sites before Christmas,” said the department.

The vouchers are redeemable at any Shoprite supermarket within 30 days.

The DG Murray Trust, working with the department of health, also announced they will award vaccinated people with cash prizes totalling up to R2m in lucky draws conducted in December and January.

Cash in exchange for the jab? Here are the companies giving incentives to vaccinated citizens

In an effort to get citizens vaccinated for Covid-19 amid the Omicron variant, SA companies are doubling the offering of incentives.
News
8 months ago

Ramaphosa said the reinstatement of the grant was made possible by the slight improvement the country has seen in revenue collection.​

“We are expanding the number of people who are eligible for the grant by allowing unemployed caregivers who currently receive a child support grant to apply,” he said.

“This will build on the strength of our existing social protection system, which is one of the greatest achievements of our democracy.

Since the June booze ban, government hasn't yet imposed another one.

At the start of the pandemic, the country introduced a total ban on alcohol sales, which lasted from March 27 to June 1 2020. The ban was brought back on 12 July 2020 but removed for a second time on 17 August. In mid-December, a third ban was put in place and lifted in February this year.

Over the past few months, alcohol groups have lamented the bans, saying they have cost the country’s GDP an estimated R64.8bn.

The R64.8bn excluded the cost of recent looting in KwaZulu-Natal and Gauteng. More than R500m in liquor stock was looted during violence and destruction in the provinces.

SA Liquor Brand owners Association (Salba) chairperson Sibani Mngadi said the four bans on alcohol sales resulted in a total loss in retail sales revenue of R45.1bn, or equivalent to 15.8% of the sector’s projected sales for 2020 and 2021.

Any form of lockdown will be a death sentence for SA's restaurant industry, The Restaurant Collective has warned.
News
8 months ago

Government recently extended the national state of disaster by a further month, despite many calls by politicians to end it.

In a government gazette published, co-operative governance and traditional affairs minister Nkosazana Dlamini-Zuma said the extension considers the need to augment the existing legislation and contingency arrangements undertaken by the organs of state to address the impact of the disaster.

Since the start of the lockdown, there has been a limit on large gatherings. In the latest directives, issued this week the limit was extended to no more than 1,000 people indoors and no more than 2,000 people outdoors.

Where the venue is too small to accommodate these numbers with appropriate social distancing, then no more than 50 per cent of the capacity of the venue may be used.

Royal AM's superfan Joy “Mama Joy” Chauke, welcomed the return of local football league matches in the evenings in December but called for it to be accompanied by spectators returning to stadiums.

“It is a good move but supporters want to return to the stadiums. They can’t be saying matches are moving back to their original time slots but they are not opening for us.

“I am hoping that by January or February we will be allowed to go back to the stadiums because that is the most important thing for the fans out there.It has been so long. Covid-19 is still going to be with us for a long time to come, I think the best way to go about it is to allow vaccinated fans into stadiums,” she said.

The lobby group said on Monday it will approach the courts if it receives no response from the minister.
Politics
8 months ago

President Cyril Ramaphosa’s announcement that the country would remain at lockdown level 1 after a recent increase in Covid-19 cases across the ...
News
8 months ago

President Cyril Ramaphosa slammed certain international countries for prohibiting travel to and from Southern Africa after the discovery of a new ...
Politics
8 months ago