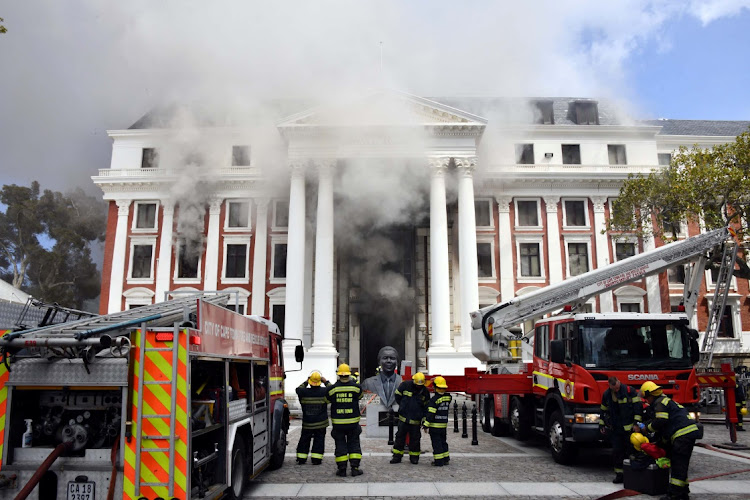 Firemen at work in parliament where a fire broke out in Cape Town on Sunday.
Image: ELMOND JIYANE/GCIS Handout via REUTERS

Cape Town city mayor Geordin Hill-Lewis has offered the council chamber, Grand Parade and city hall for sittings of the national assembly and the upcoming state of the nation address.

Hill-Lewis said Sunday’s fire at parliament is a "national tragedy”.

“Cape Town is also the historic seat of parliament, and so we share in the sense of tragedy felt by so many at this time. While the full scale of the damage is being assessed, the city of Cape Town stands ready to do whatever it can to help.”

He said he had contacted speaker of parliament Nosiviwe Mapisa-Nqakula to make their facilities available.

The state of the nation address is scheduled to take place on February 10.

A national tragedy is a time for all of us to do our part to help. Cape Town will do what we can. I’ve been in touch with the Speaker to offer use of our Council Chamber so Parliament can continue to meet, and City Hall for the State of the Nation Addresshttps://t.co/m2X1vR94ho

“We want to see parliament continue its important work, and we will do what we can to help.”

Hill-Lewis said he was also grateful for the city’s firefighters who “responded so quickly and in such force this morning, for their brave efforts to save as much of parliament as possible".

“They deservedly earned the praise of President Cyril Ramaphosa in his press conference earlier, and they no doubt have the thanks of the country too.”

A fire that has damaged sections of parliament in Cape Town and now spread to the National Assembly chamber has sparked concerns over the opening of ...
Politics
5 months ago

Public works and infrastructure minister Patricia de Lille has confirmed that a 49-year-old suspect has been arrested in connection with Sunday's ...
Politics
5 months ago

National Assembly speaker Nosiviwe Mapisa-Nqakula and chairperson of the National Council of Provinces Amos Masondo said no one had been injured in a ...
News
5 months ago

49-year-old suspect is ordinary citizen who gained access through back window, say Hawks

The person taken into custody in connection with the fire that broke out in parliament's National Assembly building is now confirmed as a suspect in ...
News
5 months ago