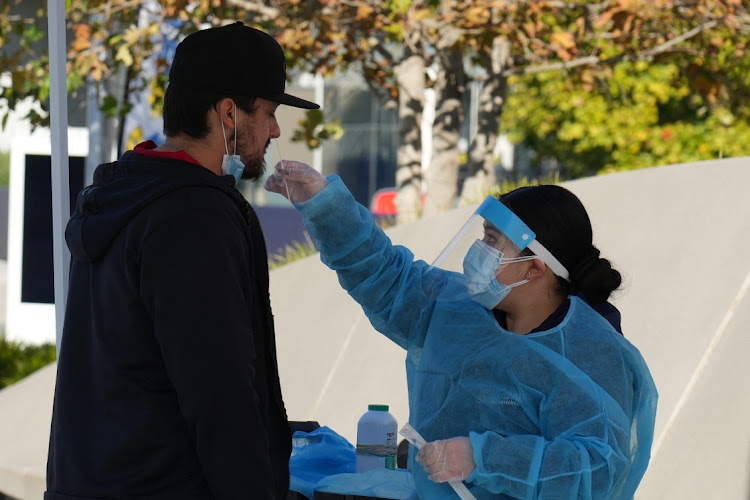 A spectator takes a nasal swap coronavirus test at a mobile Covid-19 testing site at SoFi Stadium during the game between the Los Angeles Chargers and the Denver Broncos.
Image: Kirby Lee-USA TODAY Sports

SA recorded just more than 3,200 new Covid-19 cases in the past 24 hours, with the positivity rate dropping to below 20%.

According to latest data from the National Institute for Communicable Diseases (NICD), the 3,232 new Covid-19 infections came from 17,339 tests — a positivity rate of 18.6%.

There were also 87 new Covid-19 related deaths reported in the past 24 hours.

Botswana's president in isolation after testing positive for Covid-19

Botswana's President Mokgweetsi Masisi is in mandatory self-isolation after testing positive for Covid-19 in routine testing, a government spokesperson said on Monday.

“The president does not have any symptoms and will continue to receive close medical monitoring by his doctors,” John-Thomas Dipowe, acting permanent secretary for government communications, said in a statement.

Vice-President Slumber Tsogwane will assume the president's responsibilities until further notice while Masisi is in isolation, Dipowe said.

Botswana's president in isolation after testing positive for Covid-19

The Association of Southern African Travel Agents (Asata) has urged the Mauritian government to lift its ban on travel from SA.

Mauritius has extended its ban on travel from Southern African countries until January 31 2022 despite the presence of the Covid-19 Omicron variant on the Indian Ocean island.

“Asata is frustrated and disappointed by the Mauritian government’s decision to further extend a travel ban when it is evident there is no scientific basis to continue the ban,” said Otto de Vries, Asata CEO.

More Hong Kong residents are getting their first shots against Covid-19 as an omicron cluster spreads to a likely sixth person and an expansion of the vaccine mandate looms.

The city administered more than 7,000 initial injections on both Saturday and Sunday, the most since the end of November, as citizens fear a fresh wave of infections tied to an outbreak at a local restaurant. The government confirmed a fifth case, the wife of an earlier patient, and said a sixth person who also dined at the restaurant tested preliminarily positive.

There are still two tables of unidentified guests — six people — who were at the Moon Palace on Dec. 27 when a Cathay Pacific Airways Ltd. aircrew member who later tested positive was there eating with his family, government officials said at a briefing on Monday.

They urged patrons to reach out to health authorities and said they will use CCTV footage to track them. The number of people getting booster shots over the weekend outpaced those getting their initial injections after the city expanded access to all adults on Jan. 1. Some 8,000 people got a third injection on Saturday, the first day of the New Year, with more than 10,600 others following on Sunday.

The uptick in immunisation comes as locally-transmitted cases in the city, the first in almost seven months, heightened the stakes for the vaccine rollout, which is one of the worst among developed economies.

The government is set to launch an expanded vaccine mandate that will require an inoculation to patronise restaurants, gyms and cinemas later this month. Hong Kong to Start Vaccine Mandate at Restaurants, Gyms, Cinemas

Only about 65% of Hong Kong’s residents have received a first dose because of strong hesitancy, especially among the elderly. Meanwhile, 5.3% of the 7.4 million-strong population have got a booster shot, according to Bloomberg’s vaccine tracker. Tracing Transmissions

The government has sent 340 contacts of the initial patient from the restaurant, and their household members, to be isolated at the city’s quarantine center, according to a government statement on Sunday. The group includes 22 restaurant staff members and about 170 customers.

Those with recent infections didn’t have any face-to-face contact with the aircrew member, officials said. The latest infection was detected in a 66-year-old woman who was eating with her relatives at the restaurant when the Cathay aircrew member was there. The omicron threat has delayed Hong Kong’s long-negotiated border reopening with the mainland China, which local media had widely reported was expected to begin on a trial basis last month.

While city officials have offered little clarity on the timeline recently, they said they plan to prioritise getting the current omicron cluster under control since it poses a risk of triggering a broader outbreak in the community. Hong Kong Is Increasingly Shut Off as Inbound Flights Drop

Hong Kong tightened quarantine requirements for aircrew, which is believed to be the initial loophole that allowed the virus to seep into the city and seed the local transmissions. The new requirements have dealt a blow to local airlines and further stretched supply chains that were already under strain.

Israel will admit foreigners with presumed Covid-19 immunity from medium-risk countries as of Jan 9, the Health Ministry said on Monday, moving to reverse a ban on entry by foreigners imposed in late November in response to Omicron variant surge.

Those slated to be allowed in would travel from countries Israel has designated “orange”, would have to prove in advance they are either vaccinated or have recovered from Covid-19 and would be subject to PCR testing before and after their arrival.

India started vaccinating children aged 15 to 18 against the coronavirus on Monday as it expands its inoculation effort to protect the world's largest adolescent population.

Authorities on Monday reported 33,750 new Covid-19 cases and 123 deaths. The total number of cases of the fast-spreading Omicron variant detected in India was 1,700, the health ministry said.

Private and public schools will double up as vaccination centres for children and school authorities have been ordered to report their daily vaccination data to state authorities.”

Children are going to be given vaccines in their schools. They can also go to vaccination centres and get the dose ... they can just walk in,” said Jai Prakash Shivahare, health commissioner in Gujarat state.

Several countries including the US, Britain and South Korea have seen infections among children fuelling a rise in cases in recent weeks and have encouraged parents to get their children vaccinated.

Authorities in Gujarat, which is Prime Minister Narendra Modi's home state, are hoping to give a first dose to 3.6 million children this week.

“We have the capacity and we have the vaccines to cover most of the children. We appeal to parents to co-operate and ensure the children are vaccinated at the earliest,” Shivahare said.

The UN children's agency Unicef estimates India has the largest population of adolescents in the world with about 253 million of them.

Thousands of children, many accompanied by parents, queued up outside schools, medical centres and special health camps from early on Monday to secure their first dose of a vaccine.”

Some students are nervous to get their first shot but we're offering them some fruit and trying to keep them busy in the classrooms,” said Fateh Singh Rawat, who heads a public school in Jaipur, capital of Rajasthan state.

The government is only giving children Bharat Biotech's Covaxin vaccine as that is the only vaccine with emergency use listing for the 15-18 age group, the health ministry said last week.

Adults in India get Covaxin, the AstraZeneca vaccine, which is branded as Covishield, and the Sputnik V shot.

The chief minister of Assam state said he hoped to see two million children vaccinated over the next week.”

Together we can fight Covid-19 and I am sure we're on the Right track,” said Himanta Biswa Sarma.

Israeli Prime Minister Naftali Bennett said that the country would offer a fourth dose of Covid-19 vaccine to people over 60 and to medical staff as it faces a surge in Omicron variant infections.

US Defense Secretary Lloyd Austin said he tested positive for Covid-19 with mild symptoms and would retain all authority in running his department as he quarantined at home for the next five days.

The top US infectious-diseases expert on Sunday warned that a surge of coronavirus cases could threaten the capacity of the nation’s hospital system.

Twitter Inc on Sunday said it permanently banned the personal account of Republican US Representative Marjorie Taylor Greene for tweets that repeatedly violated the social media's misinformation policy on Covid-19.

The congresswoman from Georgia is the first member of Congress to ever have a Twitter account permanently banned.

Twitter has previously issued a short-term suspension for Greene's account, @mtgreenee, for tweets about Covid-19 that it called “misleading”. At least two other Republican members of the House have received temporary suspensions on Twitter — Jim Banks and Barry Moore.

China's meticulous plans to prevent an Olympics-seeded Covid-19 outbreak by sealing all participants inside a “closed loop” for the upcoming Winter Games will be tested by the emergence of the highly infectious Omicron variant.

The country has reported a handful of Omicron cases and has largely succeeded in containing Covid-19 since it first emerged in the central city of Wuhan two years ago, thanks to a zero-tolerance policy that includes rigorous contact tracing, strict targeted lockdowns and travel curbs that have drastically cut international arrivals. More than 2,000 international athletes are set to head to China for the Games that start on February 4, plus 25,000 other “stakeholders”, a large number from overseas.

Most new cases of Covid-19 recorded on Sunday were in the Western Cape (27%), followed by Gauteng and KwaZulu-Natal each accounting for 21%.

The National Institute for Communicable Diseases (NICD) said the Eastern Cape accounted for 11% of the new cases, Free State and Mpumalanga each accounted for 5%, Northern Cape for 4%, and Limpopo and North West each for 3%.

Airlines greeted the New Year with more than 6,600 weekend cancellations in the US, closing out a bumpy holiday season as a winter storm swept eastward and carriers dealt with staff shortages caused by the rapid spread of the omicron variant.

Experts have warned about mass gatherings as potential Covid-19 superspreader events, but what number of people at a gathering is too many?

Where the venue is too small to hold this number of people with appropriate social distancing, no more than 50% of the capacity must be used.

“The risk of an increase in infections is still high given the high transmissibility of the Omicron variant. Government therefore calls on all organisers of these gatherings to ensure all health protocols are observed at all times and that all attendees are encouraged to be vaccinated,” it said.