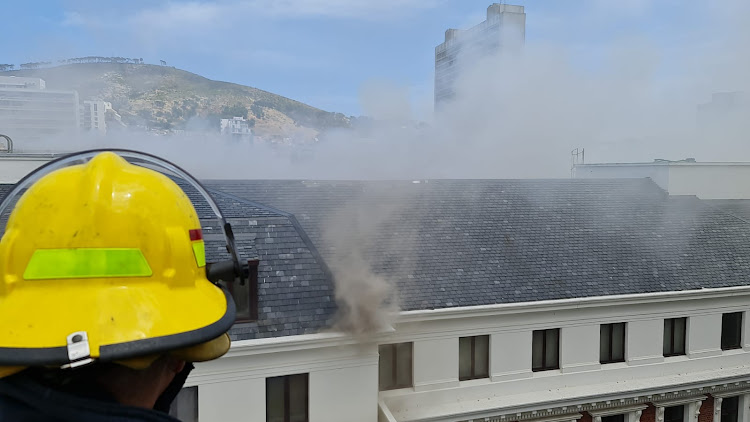 Smoke billows from the roof as firefighting efforts to contain the blaze continued at parliament in Cape Town.
Image: CoCT

South Africans have reacted with shock to the blaze that ravaged parliament’s National Assembly building on Sunday morning.

The building was gutted by the fire, the cause of which was being investigated, President Cyril Ramaphosa told journalists during a media briefing on Sunday.

The Hawks told TimesLIVE a 49-year old suspect was being held for questioning and is set to appear in court on Tuesday.

Spokesperson Nomthandazo Mbambo said the suspect was not a parliament employee. She said he gained access to the precinct through a back window.

Mbambo said the man will be charged with housebreaking, theft and arson under the National Key Point Act.

Western Cape secretary of the National Education, Health and Allied Workers’ Union (Nehawu), Baxolise Mali, said parliament had implemented a cost-cutting measure last month which resulted in security guards being instructed not to work on weekends.

He said they were not on site when the fire broke out in parliament.

“They stopped protection services (security) from coming in on weekends because they said parliament doesn’t have money so would not be able to pay them for overtime,” Mali said.

“The leadership and management of parliament must take responsibility for this sabotage. If protection services were on duty, the damage would have not been this extensive,” he said.

“The shop stewards told Nehawu there was no-one looking after the building. Their members were told there was no need for them to work overtime this festive season. Many documents could have been lost. Hopefully, the damage to records is not catastrophic,” Maimane said in a tweet.

Herron said all South Africans should be concerned about the fire.

“It is sickening to see some tweeting the parliament fire as funny, enjoyable or ‘karma’. Parliament belongs to the people of SA. It is not the house of the party that won the last election. Those who legislate from there do so on a five-year ticket they get from us,” he tweeted.

Anyone who celebrates the burning down of parliament doesn’t deserve to be an MP. They are a national disgrace.

#ParliamentFire It’s such a sad day for our country and for our democracy. Damage appears to be extensive. pic.twitter.com/0omorW20FV

I have said it before and I'll say it again.

The South African government is illegitimate. Our country is too sophisticated to be led by cadres.#PutSouthAficansFirst #ParliamentFire

Parliament has been burning for many years. It's just today that we can see the flames.#ParliamentFire #ParliamentAttack 🔥🇿🇦

The seat of South African democracy is on fire. Parliament is a National Key Point which is supposed to be under permanent, heightened levels of security & protection. Massive damage to heritage buildings & symbolic issues aside, big questions to be answered. #parliamentfire pic.twitter.com/bz7OVcei7E

The President and Cabinet members including Mayors all have 24hr Security (including holidays and weekends) paid for by our Tax...but they failed to provide such for Parliament🙄 instead they cut it down. They dont pay weekends and holidays.
What a Joke really#ParliamentFire pic.twitter.com/Zmkpljxzds

President Cyril Ramaphosa says one person is being held for questioning after a fire broke out in parliament in the early hours of Sunday.
Politics
4 months ago