WATCH | Lifeguards save 11 bathers washed out to sea in Toti 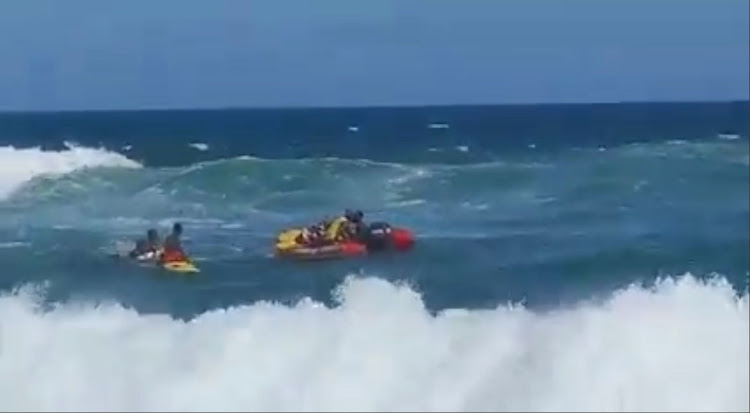 Lifeguards saved a group of swimmers caught in rough seas off the beach in Amanzimtoti on KwaZulu-Natal's South Coast.
Image: Supplied

Faced with 11 bathers swept out to sea at once, a suicide attempt and a suspect allegedly using the sea to evade arrest, SA lifeguards had their hands full over the New Year weekend.

Incidents that went viral on social media included a mass rescue at Pipeline Beach in Amanzimtoti on New Year’s Day, an attempted suicide in Ballito on December 30 and the rescue of a swimmer more than 800m offshore of Umkomaas.

“The mass rescue occurred at about 4pm at Pipeline Beach during high tide and difficult conditions. About 11 bathers were caught in the wash when a sand bank collapsed and they were being swept out to sea. The lifeguards swam out with torpedo buoys and rescue boards and secured the bathers until back-up arrived in the form of inflatable rescue boats.”

While Lifesaving SA recognised that mental health issues are a reality, members of the public should seek support from organisations such as Lifeline, he said.

“At the outset it must be noted that lifesaving is first and foremost about prevention. In difficult surf conditions on New Year’s Day as well as dealing with large crowds of bathers the lifeguards must be praised for preventing drownings.

“Many voluntary clubs and municipal beach offices have reported drowning-free duty days and it is testimony to their efforts in ensuring bathers were safe.”

Sewduth did not confirm reports of drownings in inland waterways.

“Overall, it seems the weekend was a safe one and, in particular in Durban, which may have experienced slightly smaller crowds compared to previous years, bathers were kept safe.”

Obey the lifeguards, urges Lifesaving SA as members prepare for onslaught of beachgoers

Disobedient beachgoers are the biggest challenge for lifeguards at the country's beaches over the festive season.
News
5 months ago

WATCH | Range Rover submerged after showboating in water for beachgoers

Richards Bay beachgoers were thrilled when the driver of a Range Rover put on a show by motoring through the water before ending up with a partially ...
News
4 months ago